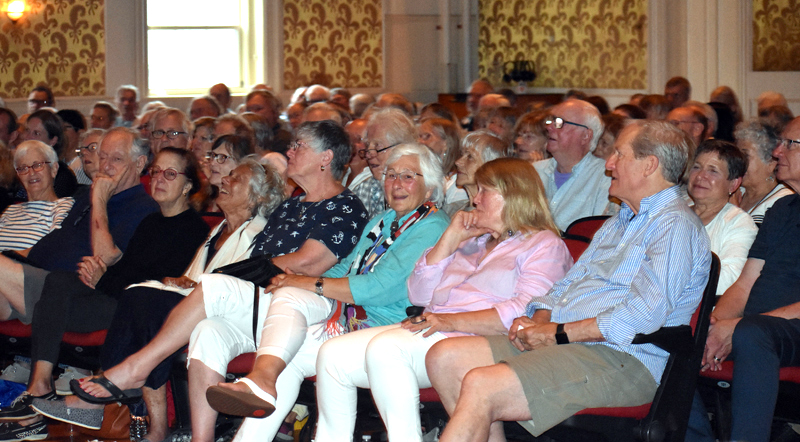 Cook is the editor and publisher of The Cook Political Report and a political analyst with the National Journal Group and NBC News. The meeting featured a discussion between Cook and Don Carrigan, Midcoast Bureau news reporter for News Center Maine, in front of a packed theater.

The meeting started with a reception catered by Stone Cove Catering, of Bristol, followed by a presentation from the theater’s executive director, Andrew Fenniman.

“It’s quite astounding the amount of support we get. The important thing is, you are the people who really make this happen,” Fenniman said.

Fenniman mentioned repairs to the 1875 building over the last year and gave a financial update, saying the venue is out of debt as of January.

Improvements over the last year include work on the auditorium floor and the building’s windows, as well as the addition of bathrooms backstage.

After Fenniman’s remarks and a word from the theater’s board of directors, Carrigan, of South Bristol, introduced Cook.

“He knows all the players, all the ins and outs, and does a terrific job of analyzing and explaining,” Carrigan said. 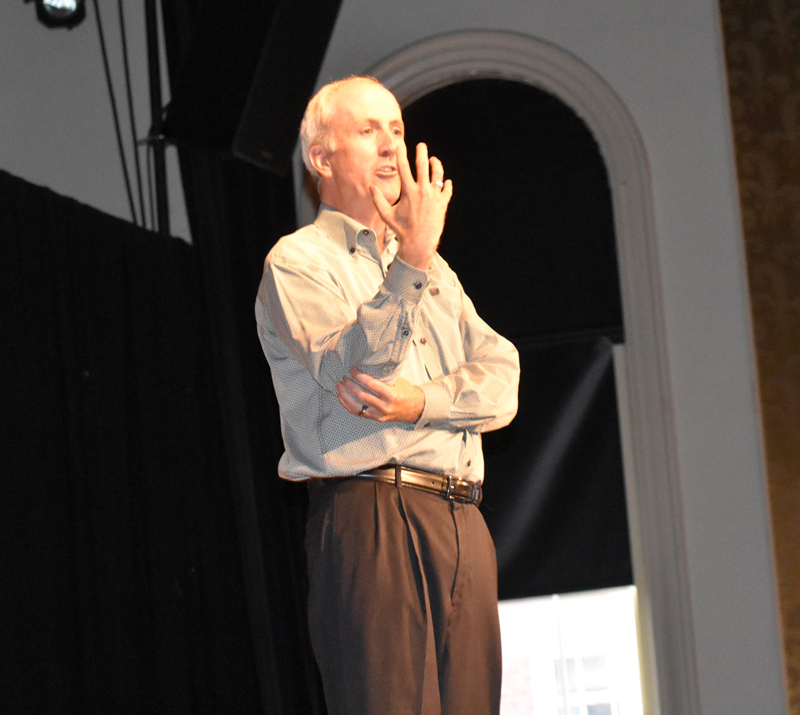 Cook, originally from Louisiana, is a summer resident of Harpswell. He founded the independent, nonpartisan Cook Political Report, headquartered in Washington, D.C., in 1984. The Cook Political Report offers analysis of elections and campaigns for Congress, governor’s offices, and the presidency.

In addition to his 34 years with his namesake publication and his current work as a political analyst, Cook has appeared on numerous news shows and worked as an election night analyst for CBS, CNN, and, since 1996, the NBC News Election Night Decision Desk in New York.

A graduate of Georgetown University, he served as a resident fellow at the Institute of Politics at the Harvard Kennedy School in 2013.

Cook opened his presentation with analysis of the 2016 election. He said that after eight years of one party in the executive branch of government, American voters are usually ready for a change.

He said Democratic presidential nominee Hillary Clinton had accumulated an enormous amount of political baggage through a lengthy political career, adding that both former President Bill Clinton and the former secretary of state had long been polarizing figures in Arkansas politics.

“Bill got away with a lot because of his charm, a kind of roguish charm, and Hillary was always charm-challenged,” Cook said.

Cook said the biggest issue facing Hilary Clinton during the presidential campaign wasn’t necessarily a glass ceiling, but rather a glass curtain people had difficulty getting through. 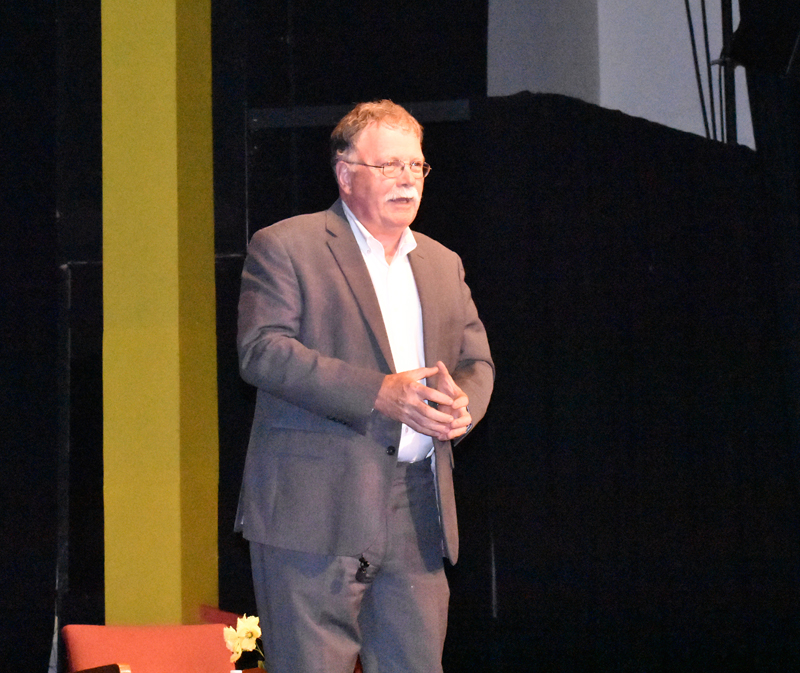 “When attacked, Bill would get mad, but then it would be like water over a duck’s back. Hillary developed an armadillo-like shell,” Cook said.

Of whether U.S. Sen. Bernie Sanders, I-Vt., would have been able to win the presidency had he been the Democratic Party’s nominee, Cook said Sanders was faced with a different set of problems.

“The election of Barack Obama created a radicalization of an element of the Republican Party that created the tea party movement, and Trump is an outgrowth of that, but you can go back before that,” Cook said.

Cook opined on the impact of the “Access Hollywood” recording featuring lewd remarks by Trump.

“With the disclosure of the Billy Bush ‘Access Hollywood’ tape a day or two before the final debate, it seemed like the election was over, but it wasn’t. People who planned to vote for Hillary and support her, all of their ambivalence started rising up. If anyone wasn’t excited to vote, they felt they had a pass,” Cook said.

Cook also touched on the negative rap that polling got in the wake of the election results. For the most part, he said, the polling was on the money, but in areas where Trump received strong support, white men without college degrees were underrepresented. 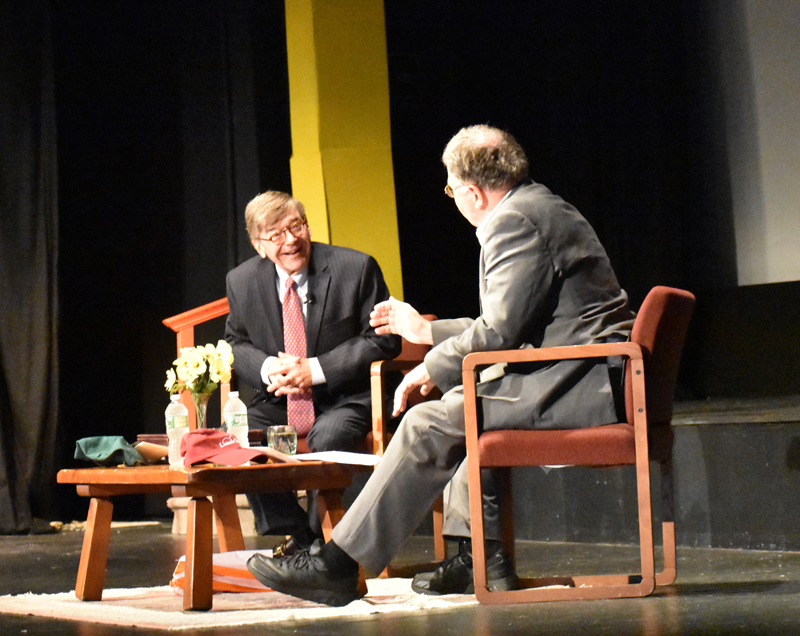 From left: Charles E. Cook Jr., editor and publisher of The Cook Political Report, speaks with Don Carrigan, a reporter with News Center Maine, at the Lincoln Theater in Damariscotta on Thursday, July 26. (Alexander Violo photo)

Additionally, Cook said the polling was off in the three states critical in determining the outcome of the 2016 election – Michigan, Pennsylvania, and Wisconsin.

The conversation then turned to the upcoming midterms.

“Midterm elections are almost always a referendum on the party in power,” Cook said.

Voters don’t vote in as high numbers for midterm elections, according to Cook, and those who do vote are doing so because “their noses are out of joint.”

“Disproportionately, people who vote in midterms are unhappy, mad about something. If your side lost or the side in power is doing things that make you angry or apprehensive, that is what makes you vote,” Cook said.

Cook compared the upcoming vote to a seawall facing a storm surge. He said Republicans have built an impressive seawall via redistricting and voter demographics, while Democrats are riding a wave of support in opposition to the current president, leading to the question of whether the seawall will be big enough to resist the wave.

Cook said he thinks the wave will be strong enough to overcome the wall in the House of Representatives, but the wall will be tall enough to hold back the wave in the Senate.