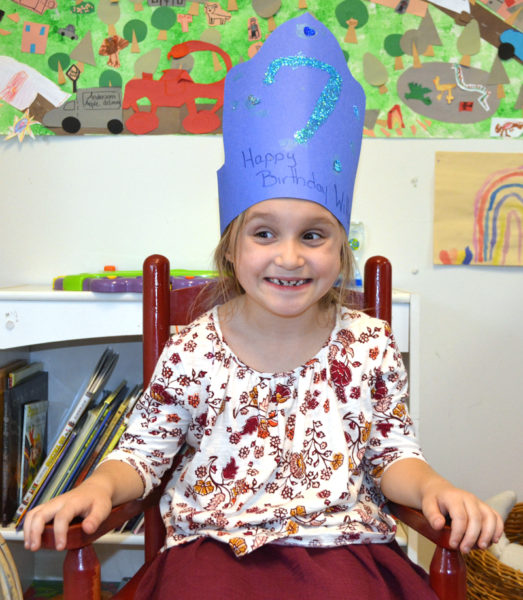 A recent fundraising video for United Way of Mid Coast Maine features a Damariscotta child for her success in overcoming developmental obstacles, thanks in part to Coastal Kids Preschool.

Willow Shadis, daughter of Gabe Shadis and Brooke Cotter, started attending Coastal Kids Preschool when she was 2 years old. Other preschools and day cares in the area were not a good fit for Willow, who has speech development delays.

“The biggest hurdle is communicative issues, which led directly to frustrations for Willow,” Gabe said. “She couldn’t express herself, and she wasn’t being understood. She knew what she was saying, but nobody else did.”

As a result of the communicative struggles, Willow was withdrawn and had a hard time advocating for herself, Gabe said.

Willow started in Jenn Caron’s class at Coastal Kids and was paired with Vicki Bryant, an ed tech, for one-on-one support.

After a couple of days with support from the Coastal Kids staff and her fellow classmates, Willow was able to find her place at the school, Gabe said.

“There is an atmosphere at Coastal Kids of just patience and compassion, and it’s not necessarily just the staff. All of the kids are taught the same principles,” Gabe said. “She had a group of peers that would gather around her and were patient with her, and it was a beautiful thing to witness.”

In addition to improving her communication skills, Willow’s parents said she became more confident and gained an ability to advocate for herself.

“She came out of here being able to say no to people, and that’s a very big thing,” Gabe said.

After graduating from Coastal Kids, Willow joined a number of her Coastal Kids classmates at Great Salt Bay Community School for kindergarten. She works with an ed tech and attends a program that has picked up where Coastal Kids left off, Gabe said. 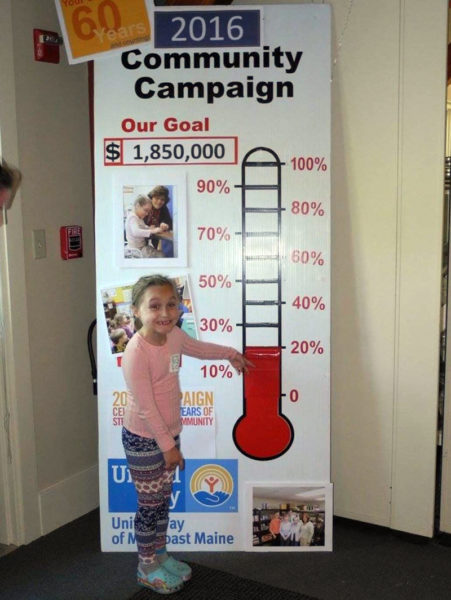 Willow is now in first grade at GSB. She still returns to Coastal Kids three times a week for an after-school program.

“Great Salt Bay is the big kids school, but (Coastal Kids) is her place, her foundational and educational home,” Gabe said.

Also integral to Willow’s continued success has been her older sister, Emory. When Willow attends speech therapy at GSB, Emory goes with her and helps her.

“Willow relies on her big sister, Emory, big time. She goes to Emory as much if not more than she comes to us,” Gabe said. “They’re closer in age, so Emory can relate to Willow and has become an interpreter of sorts.”

It was Willow’s continued growth over the years that led Coastal Kids Educational Director Priscilla Congdon to nominate Willow as a success story to United Way of Mid Coast Maine.

United Way of Mid Coast Maine, based in Bath, supports numerous programs geared toward improving the quality of life for individuals, families, and communities in the region through education, financial stability, and health programs. Coastal Kids Preschool is one of four quality child care programs United Way supports.

Willow and the Shadis family were chosen to be highlighted in United Way of Mid Coast Maine’s fundraising campaign video for 2016. The video shows Willow in the classroom and on the playground at GSB, as well as at the Coastal Kids after-school program, and features an interview with her parents.

“She was really excited about it. She thinks she’s a pop star,” Brooke said.

“Gradually we started to see a lot of progress so that she got more confident and she was proud of herself too,” Congdon said in the video. “Because she was speaking up, she really became a part of the classroom and it was so nice to see.”

The video also offered Gabe and Brooke the chance to see just how far Willow has come over the past few years.

“From a parent’s perspective, you don’t see the growth as dramatically as you do when it’s played out for you on a video. You just see the daily changes and the incremental improvements,” Gabe said. “To sit back and have it all played out for you like this, to see where she came from and how she grew to here, it’s really special.”

To see the video or donate to the campaign, go to uwmcm.org. The portion featuring Willow and her family begins at the 3:55 mark.