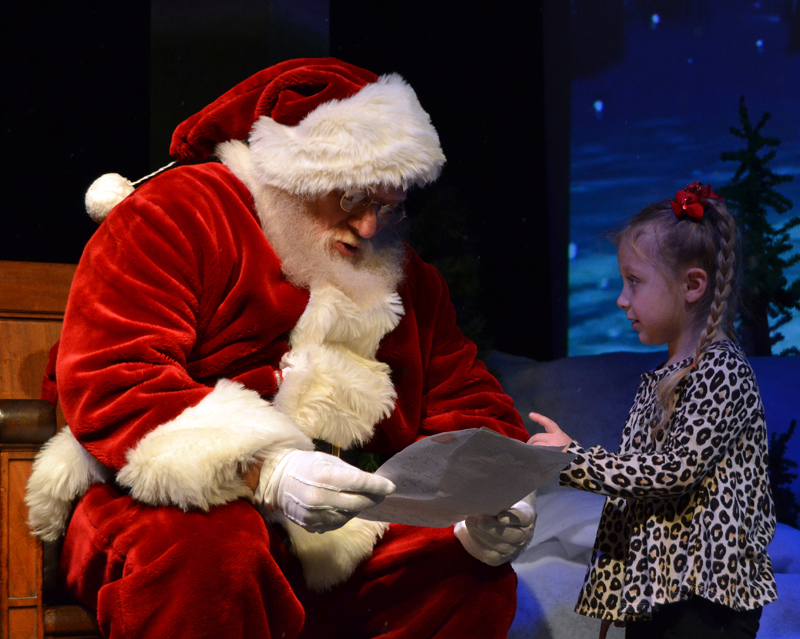 Santa reads a letter from Cali Noriega, 4, of Bristol, during a Villages of Light event at the Lincoln Theater in Damariscotta on Saturday, Nov. 30. (Maia Zewert photo)

The Christmas season kicked off in Damariscotta and Newcastle during the Villages of Light celebration on Saturday, Nov. 30.

The day-long event, now in its third year, brought hundreds of people to the Twin Villages to meet Santa Claus, make Christmas crafts, and enjoy the Parade of Lights.

“It’s just so powerful to be part of this committee that works super hard to bring so much joy during the holidays,” said Villages of Light Committee member and Damariscotta Region Chamber of Commerce Marketing and Membership Coordinator Lisa Hagen. “No matter what your beliefs are, I think everyone enjoys seeing this wonderful community lit up for the holidays.”

The event began three years ago, when a group of volunteers got together to bring a bit more light to the Twin Villages, according to Villages of Light Committee member John Roberts.

Leading up to the Nov. 30 event, the committee deployed 75 Christmas trees throughout Damariscotta and Newcastle. Five large trees were set up at Veterans Memorial Park and Louis Doe Home Center, in Newcastle; and the Chapman-Hall House, Coastal Rivers Conservation Trust, and N.C. Hunt Lumber, in Damariscotta. As the trees were 20 feet tall and taller, N.C. Hunt Lumber helped get the trees in place, while Tidewater Telecom helped to string the lights.

Smaller trees, sponsored by local businesses and individuals, were spread throughout the Twin Villages. Sponsors were responsible for decorating the 4- to 5-foot trees, while the committee provided the lights.

A major change for this year was the type of lights used. As Maine winters were problematic for battery-powered lights in previous years, the committee introduced plug-in lights, used for approximately 90% of trees, according to committee member Ted Silar. The committee hopes to have plug-in lights for all trees next year. 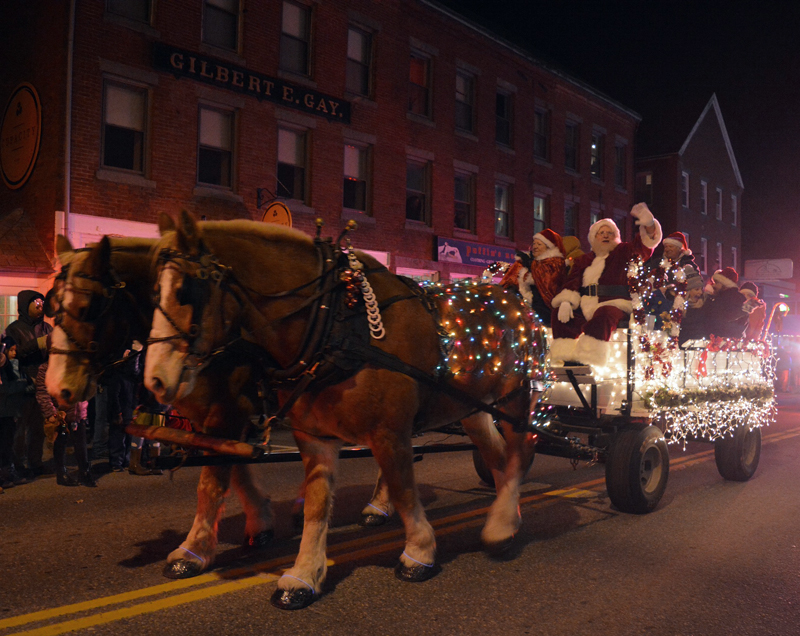 A team of horses pulls Santa Claus through downtown Damariscotta during the Parade of Lights on Saturday, Nov. 30. (Beatriz Matarazzo photo)

New concrete bases, designed by Dave Smith, of N.C. Hunt, were used for trees in the downtown and have been well received, Silar said. Trees deployed away from Main Street continued to use pallets as bases because they work better on uneven ground.

Newcastle Chrysler Jeep Dodge Ram Viper drove Santa Claus into downtown Damariscotta around noon on Saturday, Nov. 30 to kick off the day’s festivities. The Renys Rockets welcomed Santa with a performance on Main Street before he headed up the stairs of Lincoln Theater to hear Christmas wishes from children of all ages. After every child had a chance to talk with Santa, the theater presented a free showing of “The Polar Express.”

“My favorite part of the Villages of Light is welcoming Santa to the Lincoln Theater and watching him greet each child up on stage in his Santa throne,” Silar said. “Seeing the wonder in their faces never gets old!”

Throughout the day, kids were able to make crafts to take home at Cupacity.

Crowds braved the cold after dark to watch the Parade of Lights, which included floats and walkers from local businesses, organizations, families, and public safety agencies, all illuminated with Christmas lights.

“There’s just a sigh of relief when the parade was over that despite arctic conditions, people came out to welcome Santa to town,” Roberts said.

Similar to last year, the committee is holding a poll for parade-goers to select their favorite entries. The poll can be found on the Villages of Light Facebook page. The results will be announced in the Dec. 12 edition of The Lincoln County News.

In addition to the hard work of the committee, the event would not have been possible without the individuals and businesses who supported the efforts, Roberts said.

The committee will meet again soon to discuss next year’s event and would love to welcome more volunteers. Anyone interested in volunteering should email villagesoflight@gmail.com.

For more information about Villages of Light, find the event on Facebook.