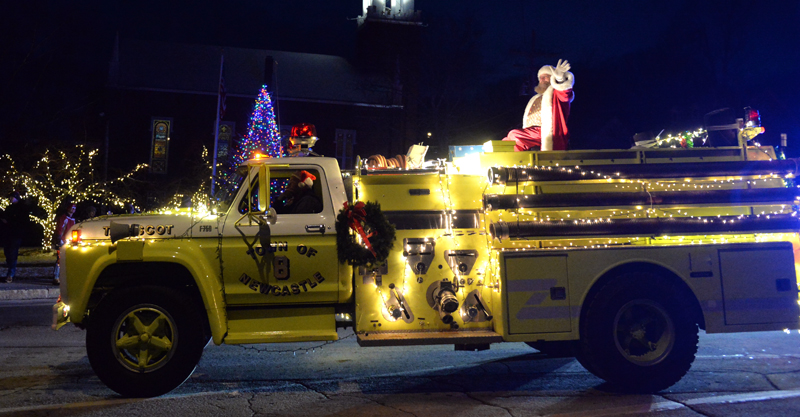 Regardless of whether household Christmas trees emerged from attics and basements the day after Halloween or the day after Thanksgiving, the 2021 Parade of Lights ushered the Christmas spirit into Newcastle and Damariscotta on Nov. 28.

Fire trucks strung with Christmas tree lights and topped with “Despicable Me” Minions, unicorns and bright green Grinch characters made their way from Lincoln County Publishing Company on Mills Road over the bridge and through downtown Damariscotta to the Baptist Church.

The guest of honor, Santa Claus, sat atop a Lincoln County Sheriff’s Office truck in his first round through the town and a Newcastle Fire Department truck in the other round, waving to the crowd and wishing everyone a merry Christmas before returning to the North Pole to prepare for the big day.

Kids and their parents braced against the harsh November winds in hats, scarves, and bulky winter coats to wave back at Elsa and Anna from the Disney movie “Frozen,” giant snowmen, inflatable polar bears, and a nativity scene organized by the Living Nativity Twin Villages Church. The final float included a machine that blew snowflakes down Main Street, catching the light of Christmas trees aglow in decorations from local businesses.

“We feel like we moved into a Hallmark movie,” Alison Wells, a teacher at the Damariscotta Montessori School, said before the parade. She moved to Damariscotta in August with her husband and two daughters. The feeling of community, particularly during events such as the Parade of Lights, is why the Wells family moved to Midcoast Maine from southeastern Massachusetts.

The Damariscotta Region Chamber of Commerce could not organize a parade downtown last year because of pandemic restrictions that limited public gatherings, so the floats and trucks were set up in three parking lots for residents to drive by. Despite the bitter cold and icy snow, residents packed the sidewalks of Main Street this year to experience collective joy over the coming holiday.

“It’s fun to bring everyone together,” Catherine Willis of Waldoboro said, who attended the parade with her young children. “It’s a reminder we’re all still human.”

Typically, the parade through downtown is held on Small Business Saturday, but the chamber decided to host the parade on Friday, Nov. 26, before it was forced to reschedule to Sunday, Nov. 28, because of the rain.

“I think our community needed this,” Lisa Hagen, executive director of the Damariscotta Chamber of Commerce, said.

Special events, decorating for the holidays, and supporting local businesses “keeps our community vibrant,” she said.

Before the Parade of Lights event and businesses decorating for Villages of Light was established five years ago, a parade was held every year just for children, who would then meet with Santa and share what they wanted for Christmas.

But a group of Damariscotta residents decided to elevate the events to get the community in the Christmas spirit and support local businesses, John Roberts, president of the chamber’s board of directors, said.

The decorations and trees will remain downtown through early January.