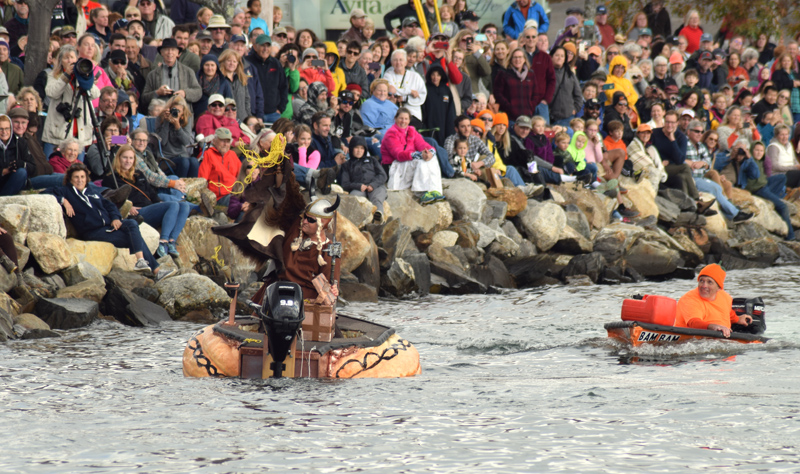 Russell Orms, of Austin, Texas, holds up the “gnome gold” he retrieved from a floating treasure chest as Buzz Pinkham looks on during the 13th annual Damariscotta Pumpkinfest Regatta on Monday, Oct. 14. (Evan Houk photo)

Another impressive crowd of pumpkin enthusiasts from near and far flooded the Twin Villages for the 13th annual Damariscotta Pumpkinfest & Regatta over the holiday weekend, Oct. 12-14.

Festival co-founder Buzz Pinkham, owner of Pinkham’s Plantation in Damariscotta, said he was happy with the turnout as well as the behind-the-scenes work by hundreds of volunteers to make the event possible and safe.

He said the number of people in attendance was similar to numbers from the past few years, although official estimates are not yet available.

The pumpkin mania started in 2006, when Bill Clark, of Bristol, came to Pinkham’s Plantation and told Buzz he wanted to get more people involved in growing giant pumpkins.

The two soon started giving away Atlantic giant pumpkin seeds, and interest began to grow as fast as the fruits themselves. 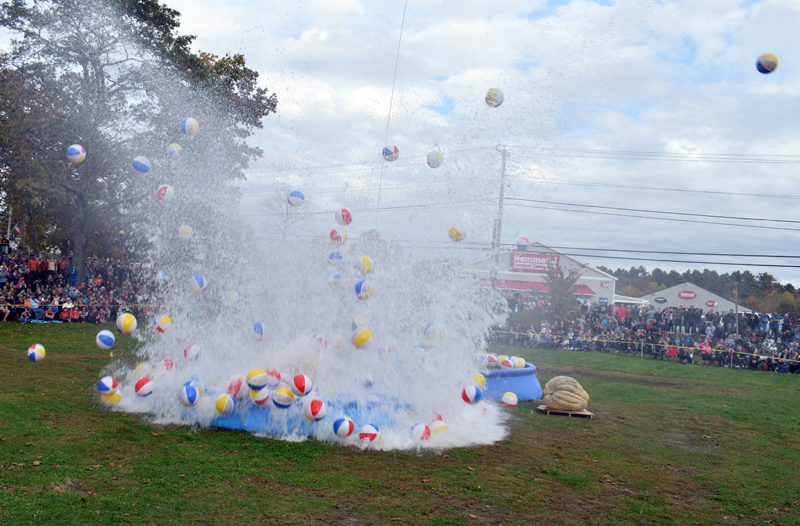 Beach balls and water fly as the first giant pumpkin touches down from its 180-foot journey into an inflatable swimming pool during the pumpkin drop at Round Top Farm in Damariscotta on Sunday, Oct. 13. (Evan Houk photo)

“It seemed like it was on everyone’s bucket list, to grow a giant pumpkin. … The whole community takes ownership because they’re the ones growing the giant pumpkins,” Pinkham said of the community spirit inherent in Pumpkinfest.

Today, the festival draws massive crowds from across the globe to see the answer to the age-old question, “What do you do with a giant pumpkin once you grow it?”

The answer seems to expand with each year of Pumpkinfest.

The giant pumpkin weigh-offs over the Oct. 4 weekend brought all the giant fruits to a central location in preparation for the festival.

“That’s why we have the weigh-off, so we don’t have to chase the pumpkins all over the state,” Pinkham said.

A total of 75 giant pumpkins were deployed, mostly along Main Street in Damariscotta and Newcastle, the following Thursday, Oct. 10. 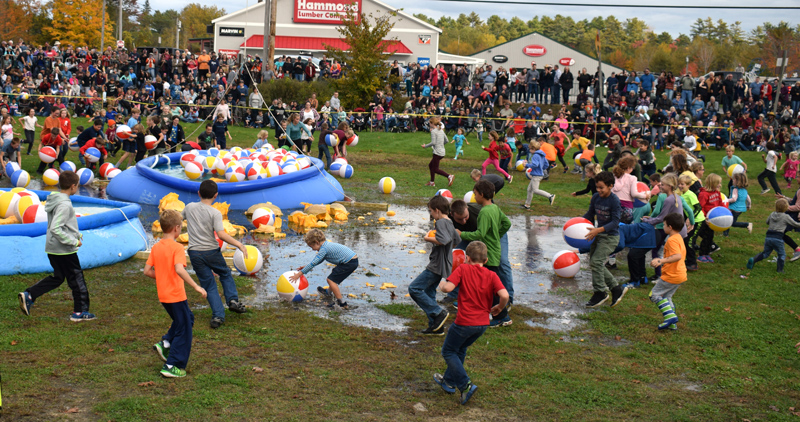 Kids rush in to play with beach balls and pumpkin debris after the giant pumpkin drop at Round Top Farm on Sunday, Oct. 13. (Evan Houk photo)

On Friday, local artists spent the day painting or carving the giant pumpkins into a wide array of creative displays.

The pumpkins will be on display downtown for the next few weeks.

One of the crowd favorites is an elaborate green dragon in front of the Colby & Gale service station, created by South Bristol artist Melissa Glendinning. The creation was crafted using a smaller Pierpont pumpkin, at just 1,800.5 pounds. 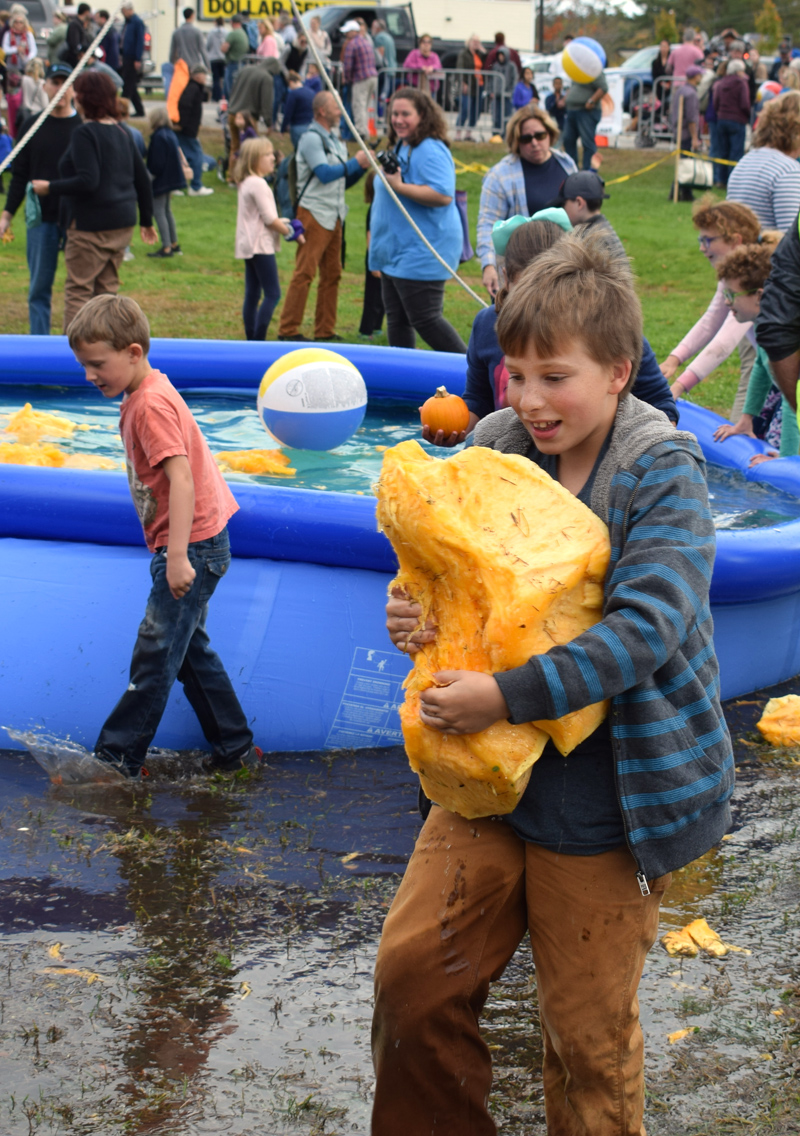 A young attendee tries to take home a souvenir from the giant pumpkin drop at Round Top Farm. (Evan Houk photo)

Precipitation early Saturday, Oct. 12 threatened to rain out the Giant Pumpkin Parade, the centerpiece and most well-attended event of Pumpkinfest, but it held off and made for a nice overcast day in the Twin Villages.

Spectators jammed the sidewalks of Newcastle and Damariscotta from the Newcastle town office to the end of the parade route at Damariscotta Baptist Church.

There was a troupe of unicyclists, the Shoestring Theater in giant puppet costumes, two sets of bagpipers, four rock bands, and floats from local businesses and sponsors.

Edwin Pierpont and Richard Powell, runner-up in the giant pumpkin weigh-off, had a float all to themselves, their families, and their prize-winning pumpkins.

There was also a mini “pumpkin car” that did wheelies for the on-looking children before struggling, with its outboard motor, to climb the final hill of the parade.

When it finally made it to the top, the driver of the pumpkin car gave a triumphant beep to the cheers of the amazed children in attendance.

Claire Sommer, volunteer public relations chair for Pumpkinfest, said the barriers along the sidewalk on Main Street, a new addition this year, were a great success from a safety perspective.

The barriers left only the designated crosswalks open for people to cross Main Street, leading to a more organized and contained parade atmosphere.

She said Pumpkinfest also hired crossing guards to work the crosswalks, allowing the Damariscotta police to focus on patrol and other duties.

Sommer pointed to the selling out of the over 1,000 pieces of Pumpkinfest merchandise as a good indicator of the success of this year’s festival.

Larry Sidelinger, volunteer transportation coordinator for Pumpkinfest, said he heard that all the ATMs in town were emptied out by festival-goers by the end of the weekend.

Starting on Saturday morning, an outdoor stage was set up next to the Lincoln Theater, where buskers and street performers played to onlookers throughout the festival.

Immediately following the parade, a pumpkin pie-eating contest was held for three age divisions in the parking lot behind the recently opened Oysterhead Pizza Co.

By rule, the contestants could not use their hands, which made for a messy and humorous display.

Josh Warren, of Kingston, Mass., defended his title from last year in the adult (20 and up) division.

Sunday, Oct. 13, started bright and early with the pumpkin pancake breakfast at the Damariscotta American Legion at 7:30 a.m.

The pumpkin derby was then held on Weatherbird Hill, by Elm Street Plaza, with a large crowd.

The Oscar Meyer Wienermobile pumpkin car, presumably named and decorated because of its narrow and aerodynamic shape, took the crown.

The day turned unseasonably warm later in the afternoon, with temperatures ticking up into the 60-degree range in the abundant sunshine. 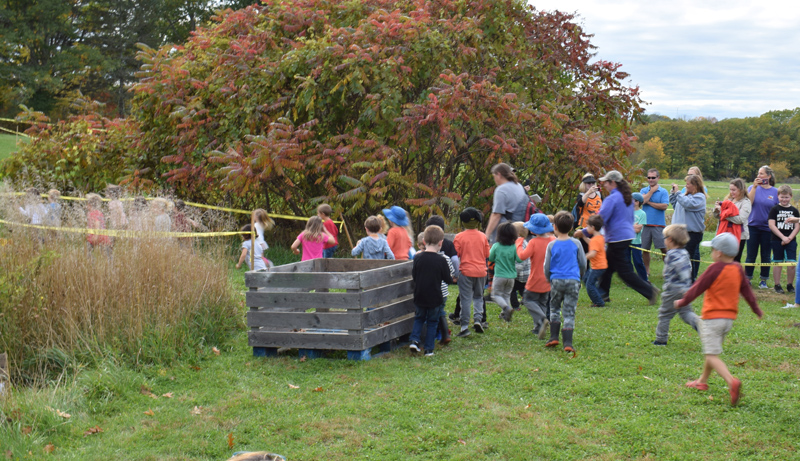 Kids sprint into a field for the pumpkin hunt at Round Top Farm on Sunday, Oct. 13. (Evan Houk photo)

The pumpkin slingshots, catapult, the popular KidsZone, and the children’s pumpkin hunt were all in full swing at Round Top Farm on Sunday.

Sommer said the children’s scavenger hunt was a new item this year.

She said the kids could pick up a scavenger hunt card and check off the boxes along the giant pumpkin trail in the Twin Villages to receive a prize.

“It gave the kids something fun to do while they were walking along with their parents looking at the pumpkins,” Sommer said.

Another new feature was the shuttle bus pickup and drop-off point in the municipal parking lot, rather than on Main Street.

Sidelinger said this strategy was a success in keeping the buses moving continuously throughout the whole weekend.

Sidelinger said there were also additional parking locations set up around the Twin Villages this year.

The giant pumpkin drop was the climax of Sunday’s events, where two pumpkins were dropped 180 feet from a crane into inflatable swimming pools filled with beach balls. 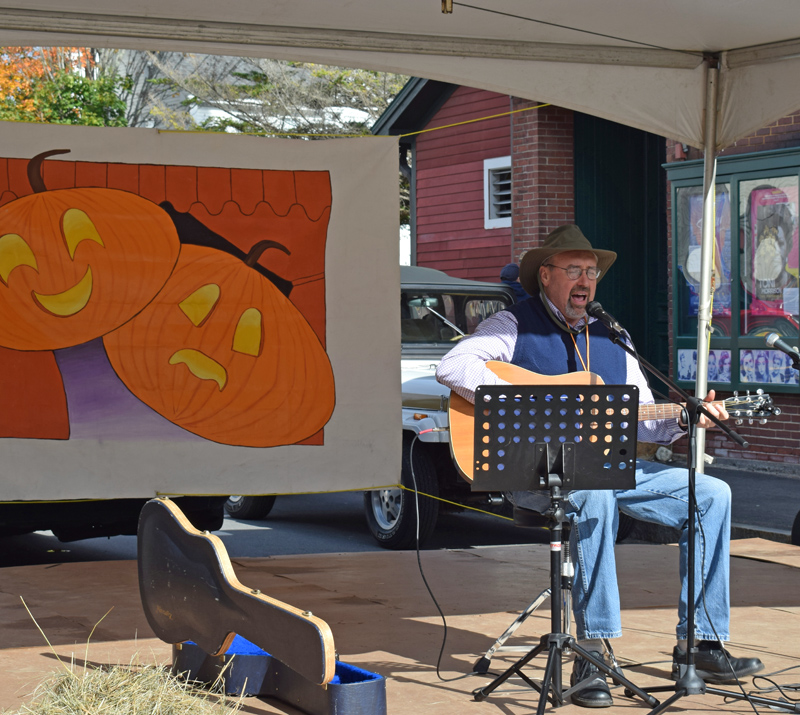 Both pumpkins exploded on impact. After the second drop, hundreds of children rushed out to play in the pumpkin water and debris after co-founder Clark let them loose from behind the caution tape.

The festival wrapped up Monday, Oct. 14, when co-founder Pinkham won his first Pumpkinfest regatta, in the motorized boat division.

“It’s really an amazing thing to do in a small town like ours. It’s very unique,” Pinkham said of Pumpkinfest.

“You walk downtown and everybody has a smile on their face, oohing and ahhing. You ask them where they’re from, Michigan, Arizona, and they’ve never seen anything like this before,” Pinkham said.

Pinkham said in addition to the intangible benefits of community-building that the festival offers, it puts Damariscotta on the map for a lot of first-time visitors.

He said he met a couple from Waterville this year who said they never knew Damariscotta existed, but they loved the town.

“Now they know the way, and they get introduced to the thriving business community, and they’ll be back,” Pinkham said of the lasting economic impact of Pumpkinfest.

Although he is proud of the hard work and dedication of all the volunteers, Pinkham said the festival still needs all the help it can get.

“We’re hoping to get some more volunteers, not just for the weekend, but for the longer-term planning, so we can keep this thing going,” he said.