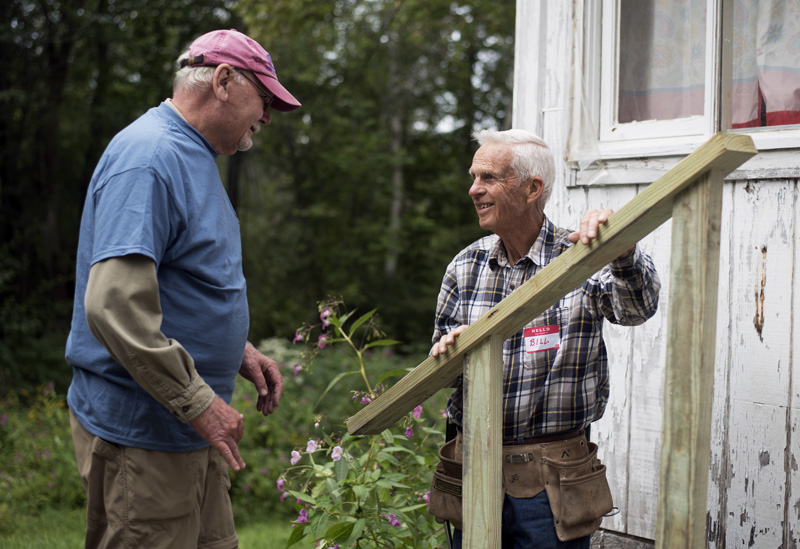 Rain showers may have transformed this year’s Community Cares Day into Community Cares Weekend, but the wet weather did not dampen the enthusiasm of over 100 volunteers the weekend of Sept. 7 and 8. 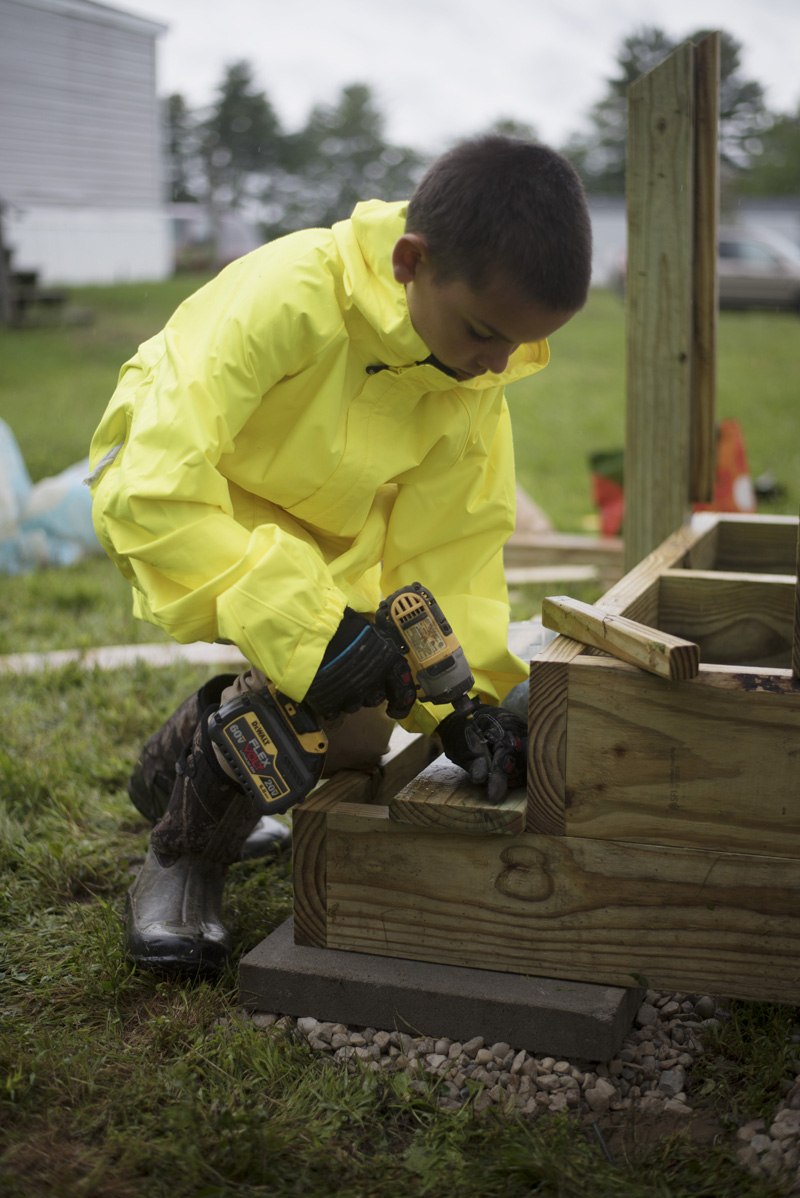 Jack Heller, 10, of Waldoboro, uses a drill as he works on a new set of stairs at East Ridge Mobile Home Park in Waldoboro on Community Cares Day, Saturday, Sept. 7. (Jessica Picard photo)

With rain clouds moving in Saturday morning, crews of volunteers gathered at The Second Congregational Church in Newcastle to get organized before going to their assignment or planning for completion of a postponed project. CHIP Inc. – the Community Housing Improvement Project – organizes the annual event, where volunteers come together to complete projects in the community.

“The energy in the room was fantastic,” Brittany Gill, coordinator for CHIP, said.

“We did not know each other, but we both volunteered to develop a program that would attract local volunteers to come out for a day in September to repair homes. The beauty of this program would be that neighbors, not an outside group, would be helping neighbors,” Whelan said.

The slogan of CHIP, and subsequently Community Cares Day, is “neighbors helping neighbors keep their homes safe, warm, and dry.”

Due to the rain and the extent of work necessary, some projects will be completed within the next few weeks.

One of the youngest volunteers of the weekend was Jack Heller, 10, of Waldoboro. Jack and his father, John Heller, spent the rainy Saturday morning assembling stairs for a family in Waldoboro’s East Ridge Mobile Home Park.

Jack Heller is home-schooled and said he has been learning about carpentry by helping his dad around the house.

“I love it. I just like building,” he said. It was the father-son duo’s first time participating in Community Cares Day.

Helping them was couple Tom and Cally Aldrich, of Alna. Tom Aldrich, who was also participating for the first time, said he was there for the sense of “community spirit.” 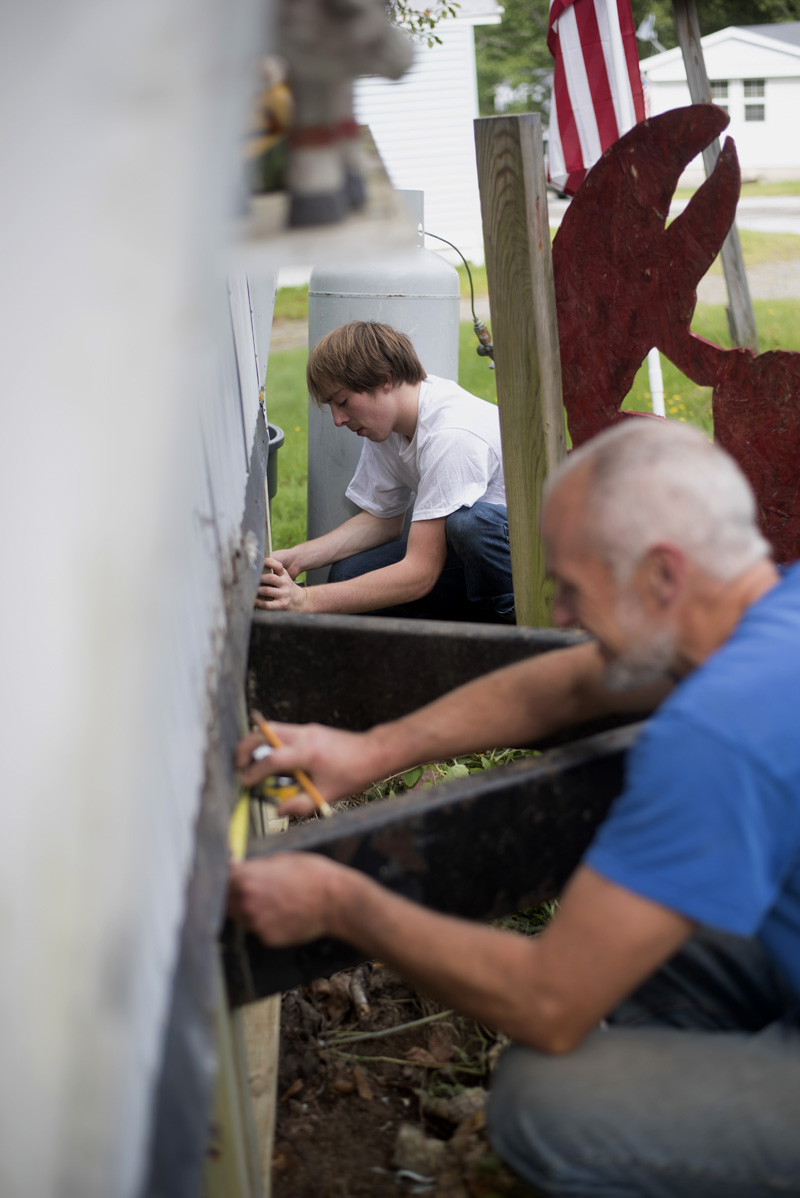 Shane Woods, back, a recent graduate of Medomak Valley High School, and Bill Hinkley, a teacher at the school, work to replace the skirt on Woods’ home Sunday, Sept. 8. (Jessica Picard photo)

Just down the street, a skirt was being built for a trailer occupied by single mother Charity Hoch and her three sons, ages 2, 3, and 4. Hoch has lived in the home for about 2 1/2 years.

“I had no idea how to go about doing it,” she said. “It means a lot to me, because I don’t know what I would have done without (the volunteers).”

Outside her door, cutting rebar, was Richard Monkman, of Bremen.

“It’s a chance to volunteer and help the community,” he said of why he was there. As was a common theme among the volunteers, he had heard about the opportunity through his church.

On Sunday, another skirting project was taking place at Skyview Ridge Mobile Home Park in Waldoboro, at the home of Tina Chapman and her son, Shane Woods.

Chapman’s father had lived in the home before his death last year, and she and her son have lived there for the past two years.

CHIP had been to the home a couple of times in the past, building a ramp for Chapman’s father, removing a window, and patching a wall.

This year’s project included replacing the home’s rotted skirt and building stairs off the back porch.

“Last year we had a lot of problems with pipes freezing,” Woods, a 2019 graduate of Medomak Valley High School, said.

Chapman said that last winter she was going through 100 gallons of oil a month trying to keep the home warm enough so the pipes wouldn’t freeze.

“This helps people keep their homes,” Chapman, a cook and clerk at Nobleboro Village Store, said of CHIP.

One volunteer at the home, Medomak Valley High School math teacher Bill Hinkley, is the adviser for the school’s outdoors club, which Woods participated in as a student. The two reminisced on some of the trips the club had taken as they worked together, measuring and cutting wood.

Working on the stairs were CHIP Vice President Stephen Busch and Bill Schwanemann.

“We are pretty fortunate,” Busch said. “We like to help.”

He said the projects carry on the legacy of the late Ruth Ives, founder of CHIP.

Around 26 Lincoln Academy students, many of them boarding students, took part in the event by building 34 window inserts for four households. The group was led by Sarah Kennedy, an LA alumnus who works in the school’s Office of Resident Life. Kennedy grew up knowing Ives, who passed away in 2006.

“As a child, I didn’t comprehend all the work she was doing to help her neighbors in need, but I remember her in The (Carpenter’s) Boat Shop kitchen (with) phone or notepad in hand, coordinating activities, gathering donations, serving up tea and blueberry muffins to anyone who walked in the door,” Kennedy said.

The inserts fit inside a window frame on the interior of a home, improving insulation and reducing heating costs and environmental impact. The materials for the project were donated by Hancock Lumber, of Damariscotta, and Lamatek Inc., of New Jersey.

“From getting to know the family recipients, working with skilled builders to learn about the appropriate tools and designs, and witnessing teens and adult community members unite in a common project, I’m truly moved by the impact this effort has had on the student volunteers, team leaders, and recipient families,” Kennedy said. “It was a lot of work to get it all set up, but now that the framework is in place, I see this window insert project as being a long-term collaboration between CHIP and LA with many benefits for our whole community.”

For the second year in a row, there was a thank-you dinner for volunteers and homeowners Saturday night at St. Andrew’s Episcopal Church in Newcastle.

“I believe we are a stronger community here, in this geographic area, because of our sensitivity to the needs of all of the community,” Whelan said. “The opportunity for knowledge and growth and doing good is presented, and the response has never faltered.”