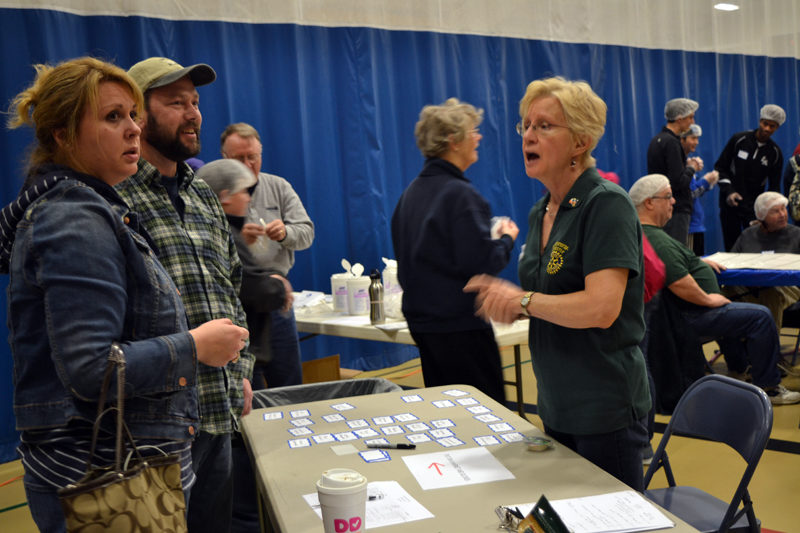 Nancy Stoltz (right) greets volunteers Nicci Doray, of Boothbay Harbor, and Neal Kimball, of Nobleboro, as they arrive at the Central Lincoln County YMCA in Damariscotta on Sunday, Feb. 26 to help pack 20,000 vitamin-fortified meals for distribution to Lincoln County food pantries. Doray is the secretary of the Damariscotta-Newcastle Lions Club and Stoltz is a past president of the Damariscotta-Newcastle Rotary Club. (Christine LaPado-Breglia photo)

The large number of cars in the parking lot of the Central Lincoln County YMCA in Damariscotta was a clue to the excellent turnout for a four-hour event on Sunday, Feb. 26, when approximately 70 volunteers assembled to pack 20,000 vitamin-fortified meals for distribution to Lincoln County food pantries to help alleviate food insecurity.

Inside the building, volunteers from the Damariscotta-Newcastle Rotary Club and the Damariscotta-Newcastle Lions Club, as well as Lincoln Academy’s Rotary Interact Club and the CLC Y’s Community Service Club, and other community members – labeled plastic bags and filled them with dried oats, dried apples, macaroni noodles, flavor packets, and textured soy protein before sealing and boxing them for delivery.

The local Rotary and Lions clubs had raised the $5,000 necessary to pay for the fortified meals of apple-cinnamon oatmeal and macaroni and cheese via a number of events, including a paddleboard raffle and the solicitation of donations in Damariscotta between Thanksgiving and Christmas of last year. The meals were purchased from Outreach International, an Iowa-based nonprofit organization focused on domestic and international issues such as water availability, education, and hunger.

“I started the program a year ago,” said Nancy Stoltz, past president of the Damariscotta-Newcastle Rotary Club, who was busy checking in volunteers and assigning them to a work station.

Rotarian Winslow Myers, one of the organizers of this second annual event, said he was pleased with the turnout, before bustling off to help with the day’s work.

Rotarian Lorraine Faherty, standing near the labeling table, said the meals being donated were “nutritionally balanced” and “healthy” before she headed off to do a necessary task.

But it was Matthew Martin, the 42-year-old Massachusetts-based regional manager of Outreach International who drove three hours from Boston to oversee the event, who was perhaps the most difficult to slow down for a chat. 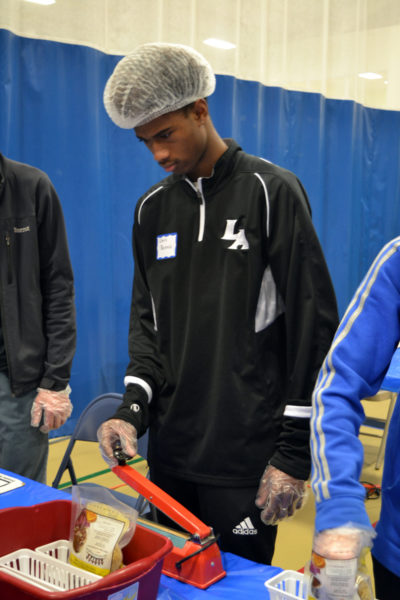 Martin, a highly energetic former Lutheran minister, has been overseeing packaging and distribution of Outreach International meals since 2005, when he lived in Minnesota. He moved to New England in 2010, “the day before the Haiti earthquake,” he said. “I had packaged a million of these (meals) before we moved.”

Martin hustled from one part of the room to another, from one table to another, to answer questions, hand out hair nets, mobilize volunteers to open large supply bags of oats and soy protein, instruct volunteers on the usage of a heat-sealing machine, and take a photograph of the large group of volunteers, among other things.

According to the domestic hunger-relief organization Feeding America, in 2014 there were 48,135,000 food-insecure people in the United States – or 15.4 percent of the overall population. Food insecurity “refers to (the U.S. Department of Agriculture’s) measure of lack of access, at times, to enough food for an active, healthy life for all household members and limited or uncertain availability of nutritionally adequate foods,” the website states.

In Maine, according to statistics put out by Outreach International, 15 percent of the population is food-insecure, and if one looks at children alone, the number jumps to 23 percent.

Most of the food-insecure are children, veterans, and the elderly, Martin said, and many food-insecure kids are homeless. “The average age of a homeless person in Massachusetts is 8,” said Martin. “If you’ve fought for your country, worked your whole life, or are 5, and you’re an American, you should have a place to live and food to eat. It’s a basic human right.”

“The winter (food-supplying) events are so important because they are choosing between heating and eating,” Martin said, referring to food-pantry clients’ needs. “Two years ago, during the snow we had in Boston, there were 19 days when there was no school – and kids didn’t eat because many eat at school.”

Martin said he is always conscious of his expenditures, as an Outreach International prepackaged meal feeds a child for 25 cents. “I don’t buy a pair of shoes for $50 because I know it could feed 200 people,” he said.