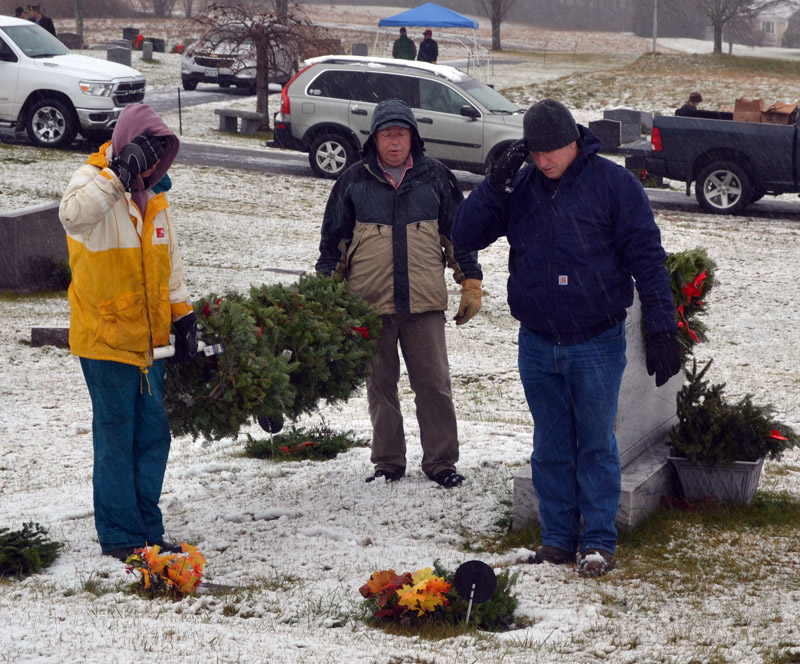 From left: Jim Hazel, David Tonry, and Chad Dietrick pay their respects after placing a wreath on a veterans grave in Hillside Cemetery in Damariscotta on Saturday, Dec. 17. Participating in the first year of a collaborative involving six local Masonic lodges and the Damariscotta-Newcastle Lions Club, volunteers placed a Christmas wreath on all 198 veterans graves in the cemetery. (Sherwood Olin photo)

One hundred ninety-eight military veterans lay in eternal rest in Hillside Cemetery in Damariscotta. On Saturday, Dec. 17, National Wreaths Across America Day, volunteers including local Masonic brothers, Lions Club members, and current and former service people laid a Christmas wreath on the grave of each and every one.

Starting at 10 a.m., the wreath laying began and ended in inclement weather. Working in cold weather and pelted by a mix of falling sleet and snow, volunteers broadly agreed the conditions were fitting for the task at hand.

“The weather is perfect for this,” said Wreaths Across America representative Don Queeney. “Seriously, think about our men and women. It didn’t matter what the weather was. I have had the honor of telling people ‘thank God you’re not in some muddy foxhole somewhere with people who want to shoot your head off every time you stick your head up.’ We’re relishing the bad weather to show them we are still willing to come.”

At noon, Wells-Hussey American Legion Post 42 Cmdr. Ryan Coffin led a brief ceremony during which veterans laid wreaths honoring the fallen of the eight individual branches of the service. The ceremony included a moment of silence for America’s 93,129 unrecovered prisoners of war and missing in action. Retired Army Capt. Robert Clifford placed a wreath in their honor.

“The United States of America was founded on the ideals of freedom, justice, and equality,” Coffin said. “Our nation stands as a shining beacon of liberty and freedom to the world. We thank those who gave their lives to keep us free and we shall not forget you. We shall remember.”

The local effort is the culmination of the Wreaths Across America effort that culminates in transporting sponsored Christmas wreaths to Washington, D.C. where they are laid on the graves of fallen service members at the Arlington National Cemetery in Arlington, Va.

According to information provided by Wreaths Across America, the Damariscotta ceremony coincided with more than 3,700 others held at participating locations across the country. This year, more than 2.7 million Christmas wreaths were sponsored and placed on veterans’ graves, including 257,000 wreaths placed by more than 28,000 volunteers working at the Arlington National Cemetery.

On Saturday, Wiscasset Mason Chuck Billings said the local event was collaborative effort by six Masonic Lodges in Lincoln County – Dresden Lodge No. 103, Lincoln Lodge No. 3 (Wiscasset), Bristol Lodge No. 74, Alna-Anchor Lodge No. 43 (Damariscotta) Bay View Lodge No. 196 and Seaside Lodge No. 144, both in East Boothbay – and the Damariscotta-Newcastle Lions Club.

“We raised money through the Lions and all the Masonic groups to purchase our wreaths, then the Maine Masonic Charitable Foundation matched two for one what we raised,” Billings said.

The original idea involved the individual Masonic lodges placing wreaths on graves in their individual towns. However, planning began late and this being the first year for the local program, it was decided to consolidate efforts, Billings said. Hillside was chosen because of its central location and because it is the final place of honor for a relatively large number of veterans.

“Each lodge was going to take care of their town, but where we started late we figured, well this is a good place to start, and then hopefully we can expand,” Billings said. “We have six lodges in six different towns and we want to be able to cover them all, but this is a start and it’s a good start.”

The Masons, the Lions, local businesses, and private citizens all contributed funds to purchase wreaths. The $15 cost per wreath helps defray expenses.

Queeney said it is a credit to the local volunteers that every individual veteran in the cemetery received a wreath this year.

“For a first year group, what we have is full coverage,” Queeney said. “They have a wreath on every veteran in this cemetery. That is not very common. Often they fall short and then they have to make a decision on who is not going to get a wreath. These guys put this together this first year. To have a wreath for every veteran, that is very commendable.”

Queeney, a Damariscotta native, was instrumental on arranging for the Wreaths Across America convoy to stop at Lincoln Academy in Newcastle in 2019. He said he hopes to bring the convoy back again in the future.

Queeney said was delighted to see his hometown on the list for wreath deliveries.

“I was stoked when I saw that,” he said. “If I am going to lay wreaths anywhere it was going to be here.”