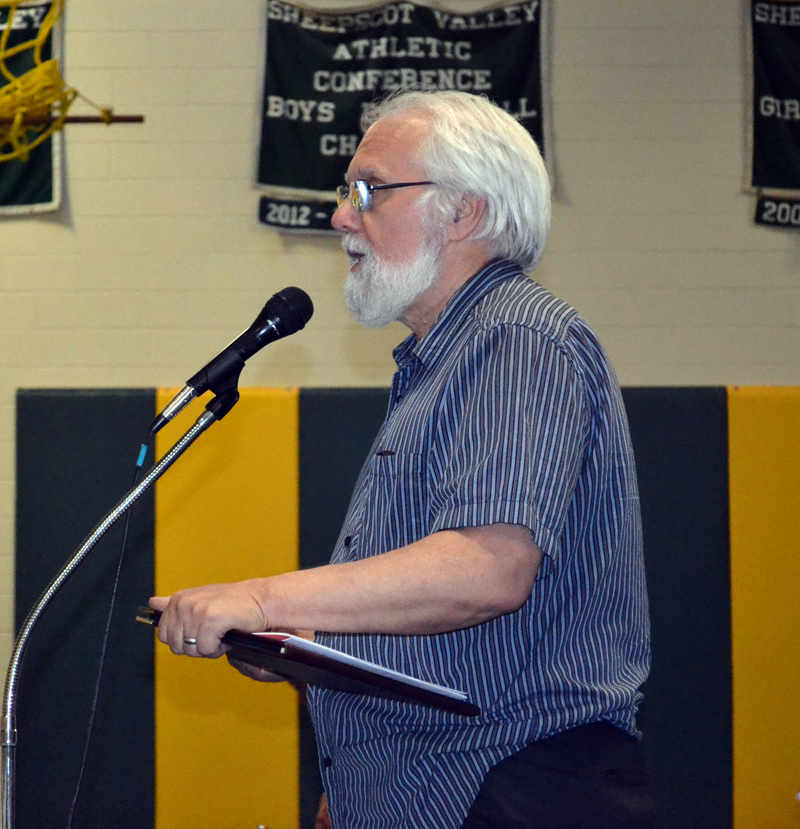 There were several attempts to amend RSU 12’s $21.46 million budget during the district’s annual budget meeting at Chelsea Elementary School on Thursday, May 18, but voters defeated those motions and approved the 2017-2018 budget as presented.

The budget will go to voters again in the budget validation referendum Tuesday, June 13. The annual budget meeting, an open meeting where voters from the seven towns in RSU 12 can amend the budget proposal, “feels like a hopeless event,” Windsor Selectman Ray Bates said. “You make the number and we’re stuck with it.”

Chelsea Selectman Richard Danforth led the charge in attempts to amend the budget. Danforth requested a hand count on his first amendment, to reduce the regular instruction category of the budget by $150,000, to see if voters could “match the votes of the RSU board and staff,” Danforth said.

The amendment was one of several Danforth had planned for the 19-article warrant to reduce the proposed increase in half, he said. The amendments were meant to “stimulate debate” about education funding and the burden it places on taxpayers, he said.

“We can’t keep saying ‘boohoo’ about state funding,” Danforth said. “Where does it end?”

The recommended budget has “no fluff,” with rising tuition costs, salary increases, and health insurance premiums driving the majority of the increase, RSU 12 board members said.

Several residents spoke out against Danforth’s amendment, noting that the cuts would most likely come out of K-8 regular instruction, which is already “bare bones.”

“We can’t keep cutting. These are our kids,” Whitefield resident Audrey Landry said. “This symbolic cutback is going to affect a real kid.”

The budget is “a rational budget with every penny explained,” Alna Third Selectman Doug Baston said. The proposed amendments are “irrational” and while voters are free to make them, Baston said he would vote against every one.

Danforth’s amendment was defeated 44-15, and he did not move to amend any other articles; however, two additional amendments were attempted.

The superintendent’s salary is far above the average salary of workers in Maine, Haiss said. 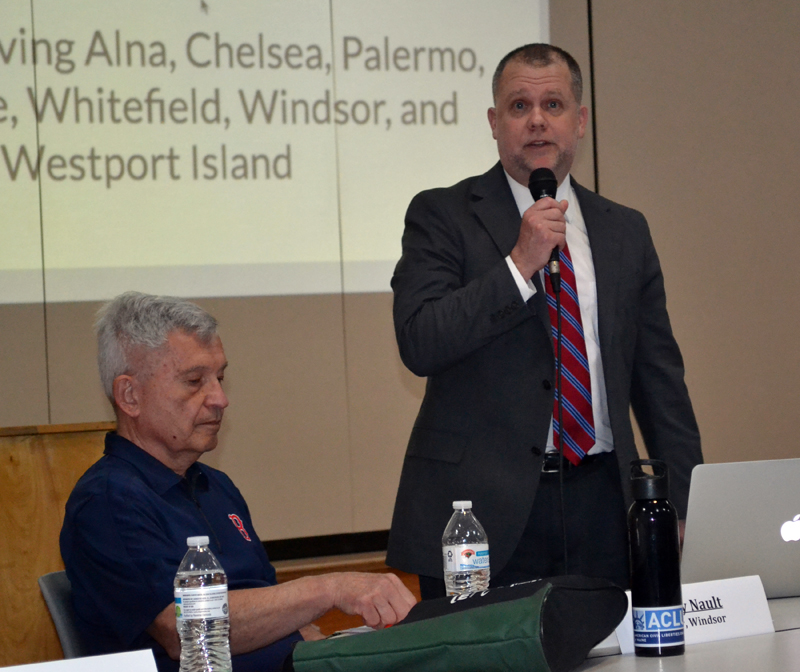 RSU 12 Board of Directors Chair Jerry Nault (left) listens as Superintendent Howard Tuttle presents the 2017-2018 budget during the district’s annual budget meeting at the Chelsea Elementary School on Thursday, May 18. (Abigail Adams photo)

The salary is negotiated as part of Tuttle’s contract, and is comparable to the average salary of a superintendent, RSU 12 Chair Jerry Nault said.

RSU 12’s cost per student for system administration is among the lowest in the state, board members said.

Danforth said he applauded Haiss’ effort to amend the budget, but noted that voters could only reduce the budget, not recommend the line item the reduction should come from. Tuttle is “the most transparent” superintendent he has worked with, Danforth said.

But it is selectmen who hear from the public when tax rates increase, Danforth said.

“We’re just trying to find a place where we can do something,” Bates said. “We’re overwhelmed on our end.”

Several residents and RSU 12 board members expressed frustration with the state regarding a reduction in state funds and an increase in unfunded mandates for education.

In addition to the state failing to fulfill the requirement in state law to fund 55 percent of the cost of K-12 public education, the federal government has failed to provide the 40 percent funding for special education that it promised public schools, board member Chris Johnson said. “We shouldn’t have to choose between the elderly and children,” Johnson said.

“The fight shouldn’t be here, it should be in Augusta,” Westport Island resident Donna Curry said.

The motion to amend the system administration budget was defeated.

A secret ballot vote on how much to raise for education, above what the state requires, passed 46-16.

A warrant article asking what to do if RSU 12 receives more in state funds than it expects was the last to inspire an amendment. The situation in Augusta is “fluid,” with no one sure what will happen with proposals to adjust the state funding formula for education, Nault said.

The amount of subsidy for the towns in the RSU 12 district could change, Nault said.

Windsor Town Manager Theresa Haskell attempted to amend the warrant article to turn over the full amount of any additional subsidy to the towns in 2017-2018. If additional funds from a town are needed due to a change in state subsidy, voters should be notified and a special town meeting held, Haskell said. Haskell’s motion also failed.

On Tuesday, June 13, voters will be asked in a referendum question if they approve the budget that was adopted at the RSU 12 budget meeting.

The discussion at the budget validation meeting “was a healthy debate” and people asked several good questions, Tuttle said. The administration and board of directors work hard to trim as much as possible from the budget before presenting it to voters, he said.

“We work hard to keep it down, but a lot of the costs we can’t do anything about,” Tuttle said.