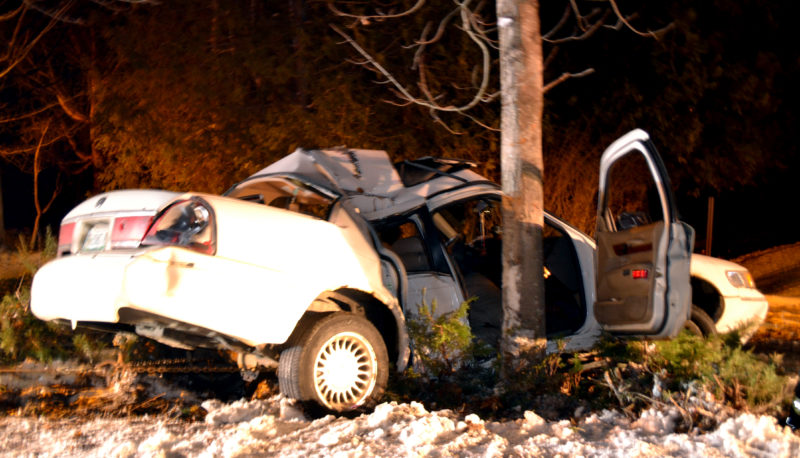 A Mercury Grand Marquis is pulled from the scene of an accident that temporarily closed both lanes of traffic on Route 32 in Waldoboro the evening of Friday, Dec. 30. (Abigail Adams photo)

Two individuals sustained minor injuries in a single-vehicle accident that temporarily shut down both lanes of traffic on Route 32 in Waldoboro the evening of Friday, Dec. 30.

The accident “should have been a fatal, but wasn’t,” Waldoboro Police Officer Larry Hesseltine said. Nicholas Emerson, 26, of Warren, the operator of the vehicle, had complaints of minor injuries, he said.

The passenger Amber Grant, 27, who was ejected from the vehicle during the crash, was transported to an area hospital, according to Emerson.

Emerson was driving a 2000 Mercury Grand Marquis southbound on Route 32 when the vehicle hit a patch of black ice, Hesseltine said. Emerson lost control of the vehicle, swerved into an embankment on the northbound side of the road, and hit a tree.

Grant was ejected from the vehicle, but had complaints of only minor pain, Hesseltine said. Emerson sustained a bump on the head, he said.

The accident, which occurred just south of the intersection of Old County Road and Route 32, was reported at about 7:45 p.m., Hesseltine said. Both lanes of traffic were closed as the vehicle was towed from the scene.