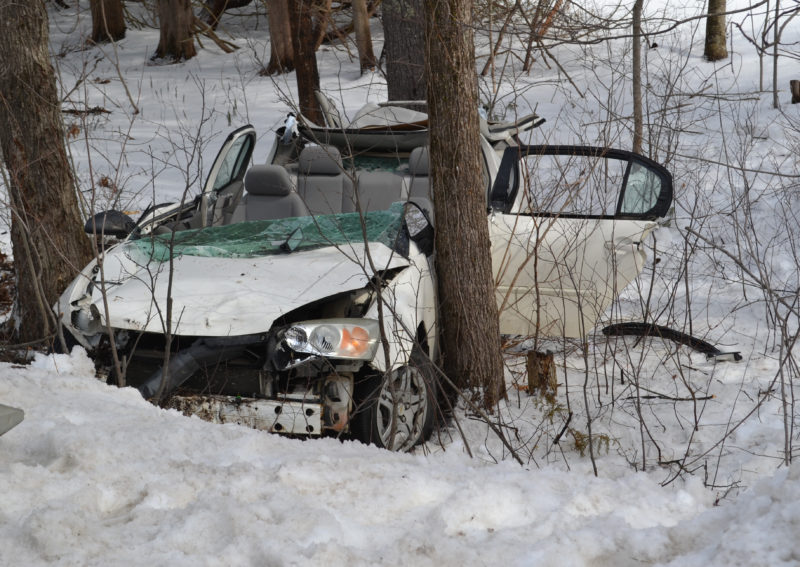 Extrication was needed in a single-vehicle accident on Route 32 in Waldoboro the morning of Saturday, March 25. (Abigail Adams photo)

Firefighters extricated a 17-year-old after a single-vehicle accident on Winslows Mills Road in Waldoboro the morning of Saturday, March 25. The teenager was transported to an area hospital, where he was treated and released.

Jacob White, 17, of Waldoboro, was driving a 2007 Chevrolet Malibu south on Winslows Mills Road, according to Officer Jeffrey Fuller, of the Waldoboro Police Department. Due to slick road conditions, the vehicle crossed the centerline in the vicinity of Cross Street and crashed into the embankment on the northbound side of the road at about 10 a.m. The vehicle struck a tree on the driver’s side before eventually coming to rest.

Waldoboro Emergency Medical Services transported White to LincolnHealth’s Miles Campus in Damariscotta, where he was treated and released, a hospital spokesperson said.

Route 32 was reduced to one lane as emergency responders worked to clear the scene. The Jefferson Fire Department provided mutual aid for traffic control. The scene was cleared in about an hour.