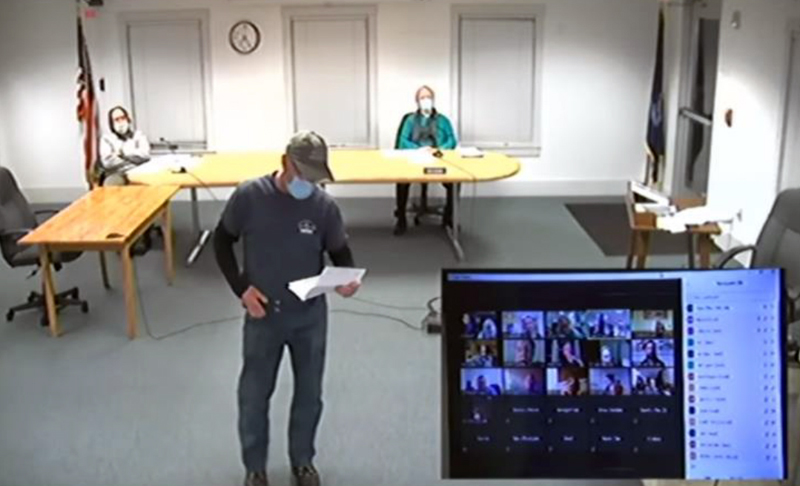 Syncarpha is proposing to build the 4.95-megawatt, ground-mounted installation on a 78.87-acre site. The impact of construction equipment on four private roads and residents’ access to the site for recreation were among residents’ concerns.

According to Syncarpha, the project will avoid wetlands, there will be no substantive earthwork or significant changes to topography, and erosion control measures will protect water quality.

Resident Paige Bossow said she is not against solar farms, but she and other residents of the neighborhood have concerns, the most significant involving maintenance of the gravel roads.

Controversy Lane, along with three roads branching off Controversy Lane, is a private road, currently full of potholes and ruts. Residents do not believe it can stand up to more traffic, including heavy equipment.

Buddy Brown, owner of the proposed site for the solar farm, has agreed to make repairs to the roads as part of his deal with the solar developer. Brown has estimated costs of $7,864 for Controversy Lane and $10,140 for Stagecoach, Sunset Ridge, and Turkey roads.

Bossow said she has repair estimates that place the cost at $15 per foot, or $55,500 for Controversy Lane alone.

The planning board stated that road repairs should bring the road up to the standards for a “major private street.” 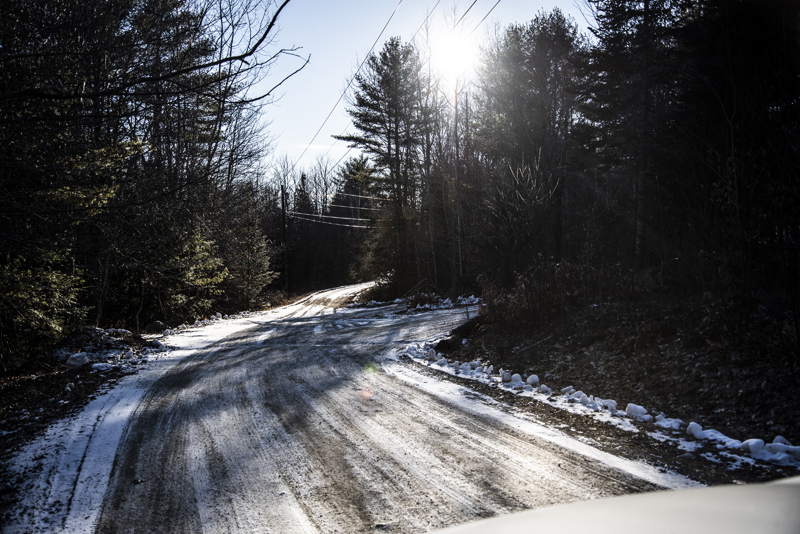 The intersection of Controversy Lane and Sunset Ridge in Waldoboro on Saturday, Jan. 23. The intersection is likely the point where the Syncarpha solar farm would route energy to Central Maine Power poles. (Bisi Cameron Yee photo)

Bossow said that she has personally spent over $5,000 on road maintenance, but less than half of the neighborhood contributes.

Bossow took issue with the lack of any contribution from the town toward road maintenance and repair. “It seems like the town is dictating to us that we must maintain the road so they can get revenue,” she said.

The planning board said the town does not contribute because the roads are not town roads.

Syncarpha, the residents, and the town all agreed that forming a road association with a maintenance agreement would be necessary to ensure the integrity of the roads in the subdivision.

Resident Theresa Blachet said, “It’s an opportunity to finally fix this problem. I have to think that the majority of the neighborhood is going to take this wonderful opportunity of someone who has professionals involved with skin in the game to get this process started, rather than relying on homeowners individually.”

The issue of disruption to the neighborhood was also raised.

“This solar farm is twice the size of the other solar farm, where one lane was often blocked to unload materials,” Bossow said, referring to the 10-acre SunRaise installation on North Nobleboro Road. “Are they planning on running forklifts up and down the road all day long? Six to eight months is a long time to hear all the beeping and pounding.”

Residents expressed concerns about access for themselves, buses, and emergency vehicles.

The developer proposed that plans detailing how and when construction vehicles would use the road be approved prior to issuance of the permit. 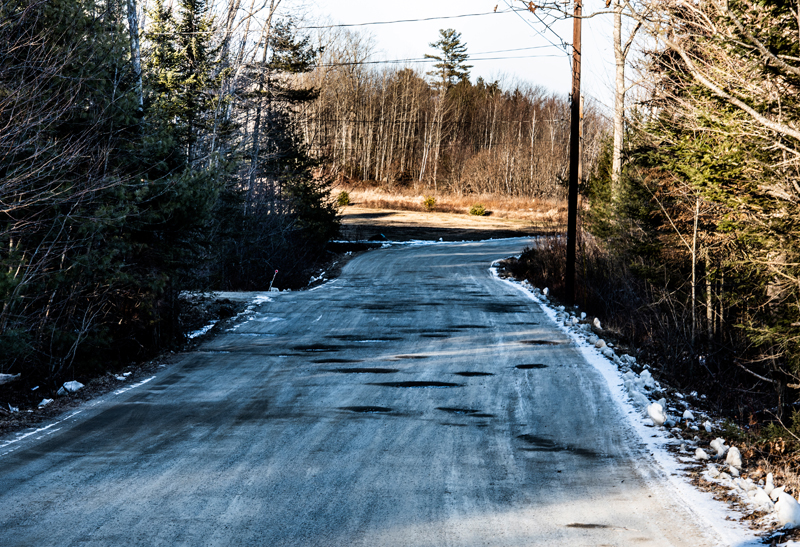 Access to snowmobile trails on the property was brought up by the local snowmobile club. Syncarpha said it “feels confident” that the club will be able to reroute trails around the array to maintain access.

Resident Tyler Lupien said, “The river up there is special. It flows to Duck Puddle, it flows to Pemaquid. It’s gorgeous up there.”

Syncarpha said it would not participate in creating public easements that would lead people over wetlands, but it is willing to have access for pedestrian traffic delineated.

The planning board raised questions about the estimated cost of decommissioning the array after it has met its life expectancy of 20 years.

Of whether the array brings advantages to the town, a Syncarpha representative responded: “We would work to give Waldoboro residents first dibs (on energy credits) before reaching out to neighboring communities.”

Scott Simpson, chair of the planning board, summarized several conditions of approval. These include providing an estimate for decommissioning and entering an agreement with the town to cover the cost by bond, letter of credit, or escrow; the creation of a road association, initiated by at least three residents per state law; submitting an agreement to bring the road up to the standards for a “major private street” that must be approved by the code enforcement officer and town planner; working with residents in a good-faith effort to reroute snowmobile trails and arrange for pedestrian access to the river; and presenting a logistics plan that addresses safety and vehicle access during the construction period. All conditions must be met and completed prior to issuance of a permit.

Planning board member Sara Hotchkiss expressed discomfort with the number of contingencies and asked if the vote could be put off to another meeting. “There are so many moving parts that need to fall into place,” she said.

Other members of the planning board disagreed, saying that “the final control is the building permit.”

Attorney Kristin Collins, representing Lupien and George Fernald, argued that the residents should have “one more bite at the logistics plan before the building permit is issued.”

Syncarpha said the state is issuing permits on a first-come, first-served basis. Obtaining “a timely approval would allow us to move forward with the next steps, but if we are delayed a month, we may lose out.”

The board approved the application, with the conditions, 4-1, with John Kosnow in opposition.