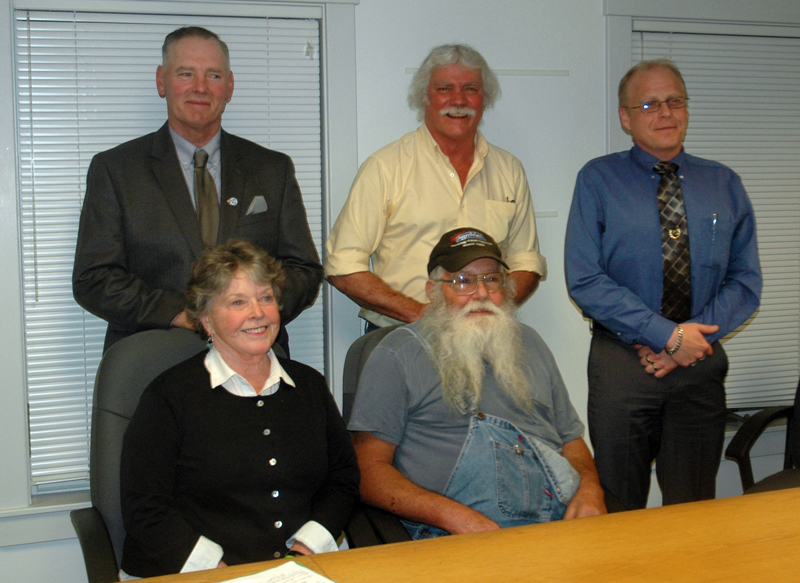 The five candidates for two seats on the Waldoboro Board of Selectmen. Standing from left: Clinton Collamore, Seth Hall, and Jeremey Miller. Sitting from left: Jann Minzy and Melvin Williams. (Alexander Violo photo)

The five candidates for two seats on the Waldoboro Board of Selectmen weighed in on several issues before the town during a candidates night at the town office Tuesday, May 30.

The Waldoboro Business Association hosted the event. Beth Birmingham, of the Courier-Gazette, was the moderator.

The candidates responded to questions on issues such as economic development, high-speed internet, recreational marijuana, and the Sylvania property.

The floor was then opened to questions from the public. The evening concluded with final statements from each candidate.

The candidates are incumbent Selectmen Clinton Collamore and Jann Minzy, the current chair and vice chair of the board, respectively; as well as businessman and Waldoboro Planning Board Chair Seth Hall, businessman Jeremey Miller, and former House candidate Melvin Williams, a retired dairy farmer.

Waldoboro voters will go to the polls June 13.

Collamore graduated from Medomak Valley High School and received a bachelor’s degree from the University of Maine at Orono before spending 23 years building naval vessels at Bath Iron Works.

He is now a lobsterman and shellfish harvester.

Collamore has extensive experience in municipal government. In addition to multiple terms on the board of selectmen, he has served on committees including the Sylvania Task Force and the shellfish committee.

“I’m running to continue the process of creating a good relationship within our community. We have a new manager we just hired and we want to make that work. We desperately need it to work,” Collamore said.

“For me, the most pressing issue (facing Waldoboro) is maintaining our largest employer, the Medomak River. For us, a lot of us, we depend on the river for our living. It’s a huge priority,” Collamore said. He also mentioned the opioid crisis and the cleanup of the Sylvania property as priorities.

Collamore credited the shellfish committee for its aggressive effort to clean up the river and build a strong relationship with the Maine Department of Marine Resources.

The river’s 150-plus shellfish harvesters “not only provide for their families, but invest a lot of money into the community,” Collamore said.

“I’ve been involved with the town 20-25 years in some capacity. I’ve spent many, many hours working diligently to make it a better community for all. A big thing for me is, my decisions not only affect me, but my family, my children and grandchildren. I want to continue to work for this community,” Collamore said.

A nine-year resident of Waldoboro who lives on Gross Neck, Hall raised his family in western Massachusetts and worked for the Massachusetts Institute of Technology before retiring and relocating to Waldoboro to return to his country roots.

Hall has been investing in property and businesses in town. He purchased the former Fieldcrest Manor in 2016 and is repurposing the facility as a business incubator.

He said local economics were a basis for his run at public office.

“I’m very concerned about where Waldoboro is economically. Waldoboro is a remarkable place. There are all types of opportunity here, but all the businesses have fled,” Hall said.

Hall said he has been involved with municipal politics for the last five years, serving on the planning board and the RSU 40 Board of Directors. He is also involved with the Medomak Valley Community Foundation.

“I think I can do even more than I could on the planning board and the school board,” Hall said.

Hall said he believes Waldoboro has a strategic position on the Midcoast.

“We are optimally situated to expand for all kinds of businesses. Aquaculture can address sustainable clamming, while oyster-growing further down the river and seaweed-harvesting are also possibilities,” Hall said.

Hall said the town is starting to attract more businesses and praised the town’s efforts to expand broadband access.

Hall said the choices each candidate offers the community would bode well for the town.

“Clearly we have different ideas and different approaches. Generally speaking, I think that’s good. Waldoboro, I think, is doing terrifically. We aren’t perfect and we have a lot of issues to wrestle with, but I’m optimistic,” Hall said. 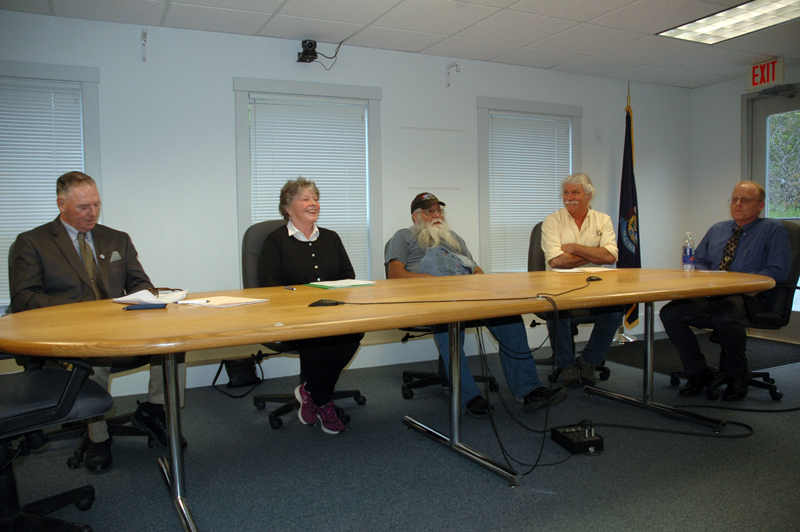 A Waldoboro native, Miller is a veteran of the U.S. Navy. He served on a submarine during his time in the military.

Miller studied at the University of Southern Maine and worked in Philadelphia and New York City before returning to Waldoboro to open Bella Gia’s on Route 1.

“I retired, came home, and didn’t like what I found. This is not the town I left 20 years ago and I vowed to do something. I have questions, just as residents do, and even if they can’t be answered tonight, at least I can bring them up,” Miller said.

Miller said a major goal is to get businesses in town to work together in an effort to promote their mutual interest in growing the local economy.

“Our businesses are doing OK. They are growing,” Miller said.

Miller said the two biggest issues he has heard concerns from residents on are the opioid crisis and the feeling that many residents have lost faith in the town office.

“They feel they vote and they are ignored. They don’t get involved anymore because they feel like they aren’t listened to,” Miller said.

“I don’t believe there is anything for our town to be ashamed of. We have a few issues here and there. I just want to get out there and get residents more involved,” Miller said.

Minzy has lived on Jefferson Street for 43 years and was born into a military family. Her father was in the U.S. Navy and the family moved across the country during her childhood, from New Jersey and Virginia to Maine, where she attended high school in Brunswick.

Minzy moved to Waldoboro in 1974, where she raised her family. Four of her children worked for Ted Wooster at Clark’s Drug Store.

“I set my roots here and I set them long and deep because I never had a chance to do that,” Minzy said.

Minzy said she spent her career as a teacher and worked a second job for 15 years at Taction to ensure her children received an education.

“I’m a hard worker with high energy. Representing the citizens on the select board has been a real privilege and a good educational experience. I think the board is well-balanced and represents a wide part of the community, and I’d like to keep it that way,” Minzy said.

Minzy said businesses, jobs and taxes are “all related. In order to lower taxes, you have to broaden the tax base while cutting spending and bringing in businesses,” Minzy said.

She said the best way to attract businesses is to know what the community’s assets are, one of which is the Medomak River. She mentioned the possibility of a clam shack or a place to rent canoes and kayaks.

“The Medomak River has clamming and fishing, but we could have a few more things,” Minzy said.

Minzy said that moving forward, the town needs to work together and be proactive.

“The times have changed. We need to improve, learn from our history, not go back to the past. Communication is essential. Positive communication is the way to go,” Minzy said.

Originally from Thomaston, Williams worked as a dairy farmer in Waldoboro for 35 years, and has continued working with the Maine Farm Bureau in Augusta.

Williams said he was drawn to Waldoboro by the availability of land, colorfully describing his interest in land ownership from a young age. He said this is his third time running for the board of selectmen.

Williams also ran for the Republican nomination for Maine House District 91, but lost in the Republican primary to Waldoboro Selectman Abden Simmons, who later won the general election.

“I’m a giver not a taker. I want to give back to the town instead of being someone who is taking out,” Williams said.

“We have high taxes for people in town. The only way to cut taxes is to do something with the school budget that we don’t have any control over. Your tax dollars aren’t going to the town, they are going to the school system,” Williams said.

Williams stressed the importance of maintaining a line of communication between residents and their elected officials.

“Communication between the community and the select board is the answer,” Williams said.