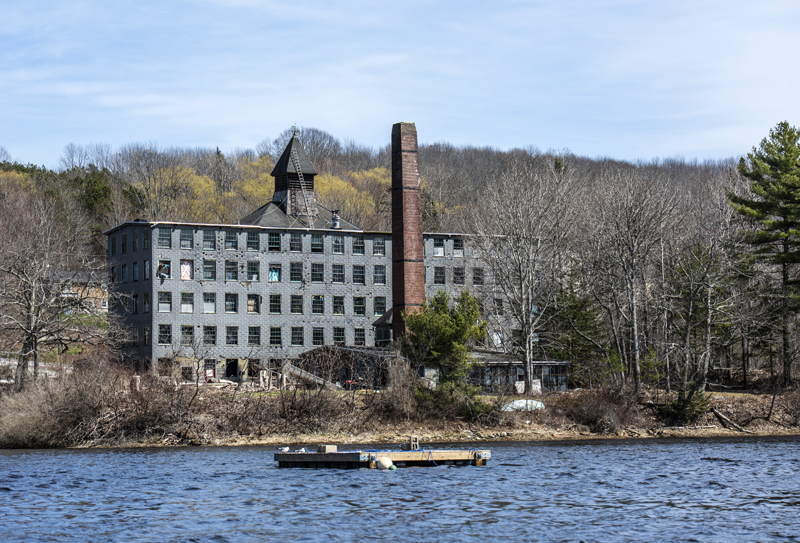 An upweller awaits deployment in the Medomak River in Waldoboro on Thursday, April 15, as the old Paragon Button Factory fills the shoreline behind it. (Bisi Cameron Yee photo)

The wind is cold, but the water is colder. A small skiff skims across the surface while another tugs a sluggish structure through the low waves of the Medomak River.

The structure is a floating collection of underwater mesh cages known as an upweller. But this one has an unusual mission. It will be the first upweller anywhere to be used not for growing shellfish, but for spawning shellfish. And it may carry the future of the Waldoboro clamming industry on its 20-by-20 deck.

On Thursday, April 15, Abden Simmons and Glen Melvin, chair and vice chair of the Waldoboro Shellfish Conservation Committee, towed the upweller to its new home in a cove of the Medomak River.

Melvin has been a clammer since 1976 and Simmons, who chairs the Waldoboro Board of Selectmen, has dug clams since the 1980s.

Melvin, Simmons, and other clammers wanted to find ways to regulate the cycle of clams to ensure a more consistent harvest. In 2019, a brainstorming session led to the creation of the upweller project.

Melvin and others recalled that there was “ridiculous clamming in the river” in the 1990s, when a local clammer used a pair of upwellers to grow clams to size. According to Melvin, “the coves below them took off.”

Melvin said there is no proof yet to base their theory on — “just observations from somebody who’s dug clams for 44 years.”

That same cove is where the upweller now resides.

Scientists and students from the University of Maine at Orono analyzed data gathered from the river to create models that could predict the best locations to maximize the spread of seed clams. Their research around the upweller project is ongoing.

The Medomak Project, an effort by the shellfish conservation committee in conjunction with Midcoast Conservancy and a number of state agencies, including the Maine Department of Marine Resources, to address pollution levels in the water, laid the groundwork for the development of the upweller and its launch into the river.

Waldoboro has the highest clam harvest numbers on average in Maine, and that harvest generates $2.1 million annually for the Waldoboro residents who make a living pulling clams from the Medomak River.

With 150 commercial clamdiggers, the clamming industry provides more employment for the town than any other business or organization with the exception of the schools, according to Waldoboro Town Manager Julie Keizer. For many it’s their sole source of income.

Keizer said the town supports the clammers in every way it can, with the exception of funding. She said the shellfish conservation committee takes pride in not using taxpayer dollars.

The upweller was supposed to launch in 2020, but the state did not grant the necessary permits in time. Even this year it took over a month to get the required paperwork.

According to Melvin, all upwellers are built differently depending on their function. The Waldoboro upweller was built to the specifications of the shellfish committee so the clams would survive suspended in the river and so the clam seed would be deposited into the current.

The upweller itself is a maintenance-free float, made of pressure-treated lumber and held in place by two 75-pound anchors.

There are four rows of six wells, each containing a 2-foot-by-3-foot cage made of 1-inch-by-1-inch wire mesh. The cages are divided into two sections.

The 24 wells can hold a bushel of clams, but the shellfish committee decided to be conservative to start. They plan to place a peck of 2-inch clams, approximately 12.5 pounds, in each layer of each of the cages for a total of 12 bushels, or approximately 600 pounds.

According to Melvin, clams can produce in excess of 1 million seeds per clam, or a minimum of 19.2 billion potential clams per upweller.

The upwellers cost about $8,000 each to construct and about $2,000 each to fill. The shellfish committee reached out to two organizations for help funding the upweller, but both declined. So the clammers went it alone with money from licensing fees.

Melvin said there are a number of unknowns that may impact the success of the upweller project.

They don’t know how the clams will react to being suspended in water over an extended period of time, as opposed to being buried in clam flats.

They don’t know if predators will be able to access them.

They don’t know if moss growing or catching on the cages will block the flow of water.

They don’t know if the seed will survive or if it will disperse in the way they expect it to.

Still, they have high hopes for the survival rate. Clams spawn in water that’s around 50 degrees, which generally happens in May in Maine.

They plan to leave the upweller in place until November, because there is some thought that clams spawn two times a year, in spring and fall.

While it will be two or three years before they feel the economic impact if the upweller works, Simmons said that they will have a good idea in the fall, when the experienced clammers will be able to see if there is more seed in the river.

Melvin lays the blame on societal changes and pollution. He said that clamming is a hard job and there are less people now who are willing to work that hard. He also said pollution shutdowns can last for days, which makes clamming a less attractive industry and a less reliable living. “But I can still make a day’s pay,” he said.

Melvin said there will always be clamdiggers. “And it may depend on whether people either have to or want to go clamming,” he said.

“I welcome anyone to go out for a day. It’s not a graceful job. There’s no glory,” Melvin said. “But it is only three to four hours a day, and there are no bosses. That’s the drawing card.”

The shellfish conservation committee just approved funding for a second upweller, also to be launched in May. They plan to launch the upwellers every year for at least the next three years.

If Simmons and Melvin have their way, the Medomak River will remain a bountiful wild clam fishery. And Waldoboro clammers will prosper.