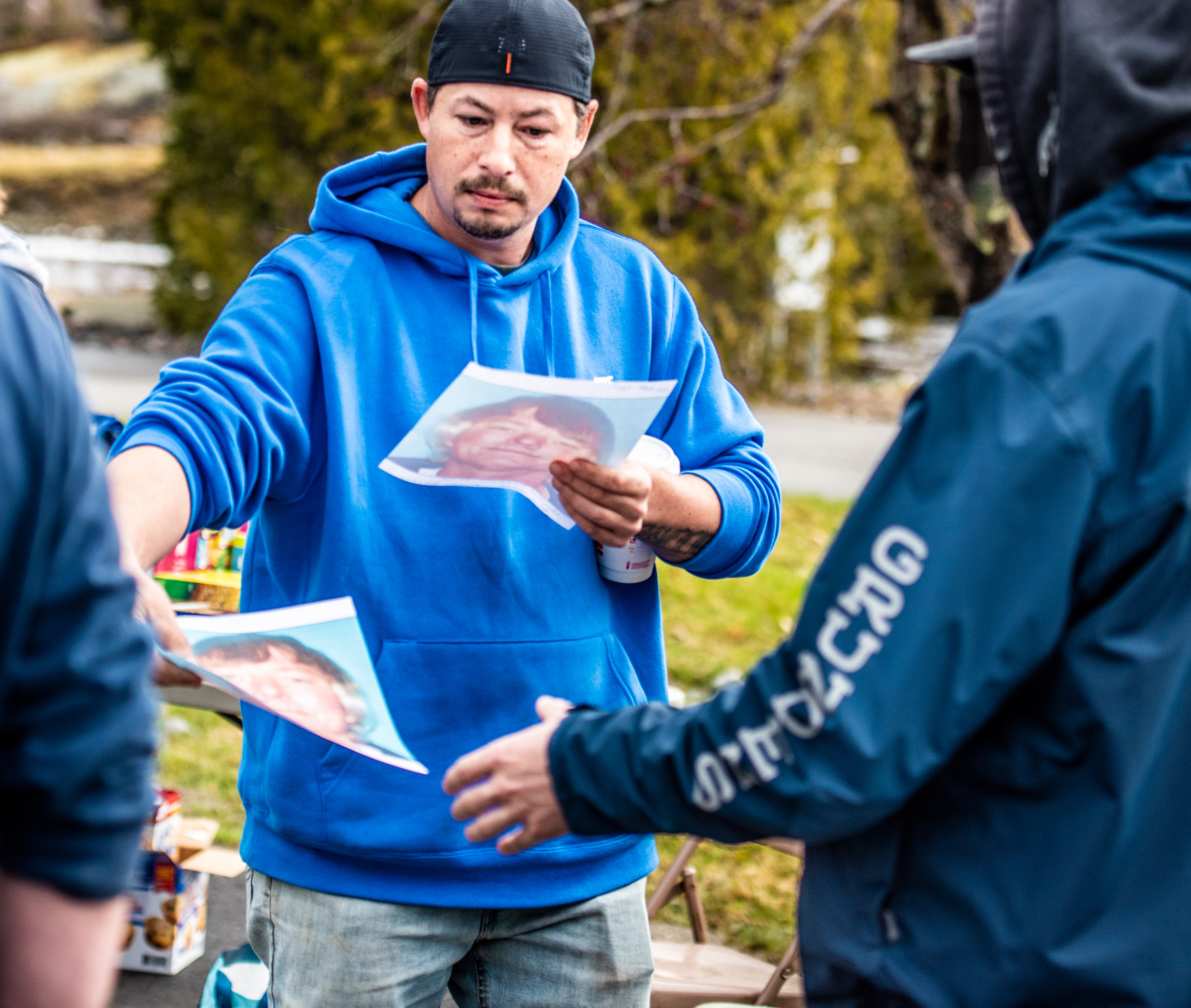 Jimmy Wellman hands out fliers with photos of Doug Barter during a search for the missing man in Waldoboro on April 9. (Bisi Cameron Yee photo)

The Waldoboro clamming community gathered at the town’s Pine Street Landing on the morning of Saturday, April 9, to search for one of their own.

Douglas Barter, 54, has been missing since Nov. 8, 2021, when he left the Miles campus of LincolnHealth against medical advice according to a Nov. 16 interview with Waldoboro Police Chief John Lash.

Police and volunteers searched the area around the hospital at the time but were unable to locate him. And a marine search by boat and plane came back empty, leaving local law enforcement with little to go on.

“We’re all family,” said Saturday’s organizer Brian Bennett, who grew up with Barter.  “Everybody here knows Doug very well. (We) all worked together, dug clams together,” he said.

Bennett and his brothers have been searching since Barter disappeared. “Every time I’m in Damariscotta, I pull in that hospital and I walk the shores,” Bennett said.

Barter did not drive, according to Bennett. He liked to walk and was known to make the trip from Waldoboro to Damariscotta by foot, often cutting through wooded areas.

“We’re going to try to cover everything from here to there,” Bennett said. “A radius around the hospital, one around the trailer park, and then everything between.”

David Fields recited the Lord’s Prayer as the searchers bowed their heads and Jack Wallace, pastor of the West Waldoboro Community Church, said a quick prayer before the crowd headed out to search for anything that might help provide an answer to Barter’s disappearance.

Several of the planned areas had already been searched, some multiple times, but recent rains caused the state to suspend clamming so more volunteers were available.

And “with the storm in the air there’s so much water coming out of the woods, coming down the rivers right now, it’s going to flop everything up,” Bennett said. “Everything we have searched is getting searched again today.”

If anything suspicious were to be found, search teams were directed to stop, step back, mark the spot, and not touch anything.

“We’re not looking to disrupt anything the police are doing,” Bennett said.

Sheldon Sanborn also grew up with Barter, and remembers going to concerts with him. “He was one of the boys,” he said.

According to Sanborn, Barter endured a lot of tragedy in his life, but “he wouldn’t have left his mother or his cat.”

Barter’s mother still lives in Waldoboro, and she is at the forefront of many of the searchers’ minds.

“We just wanted to help his mother find some peace…” Lee Bennett said.

“He’s just a clam digger, we’re all like a family, us clam diggers,” Norman Carter said. “… There’s quite a few of us who’ve come up amongst the missing throughout the years.”

Carter rattled off several names of clammers and fishermen, some of them found in community searches like this one in clam flats, or quarries, or swamps.

“(We’re) the ones who done the searching to find them,” he said. “We just fan out and go and hope and pray.”

Angie Arnold called Barter “an outgoing, funny, caring guy. He was always dancing around and hollering some rock and roll song.”

“I’ve known Doug since I was in fourth grade – we all dig clams with him,” said Israel Harvey, who was among those who helped search the woods.

“I think it’s a pretty good idea,” Clint Collamore said of the search. Collamore knew the whole Barter family and when he heard about the search he showed up to help.

Abden Simmons, chair of the town’s select board and a lifelong clam digger, was also on hand. He and wife April brought drinks and snacks to ensure the searchers stayed energized and hydrated.

Kelly Delano had been friends with Barter since junior high. She ran into him about a month before he disappeared.

“I hadn’t seen him for a long time,” she said. “It was like we never parted – he came up and gave me a big hug, told me he loved me. I’ve just been praying… he’s still with us and if not, that they find him today.”

“I think a lot of these guys just need to do something and find that closure for the friends and the family. It’s been a while,” Shawna Simmons said as she checked in volunteers.

The day after the search, Bennett said that while they covered “quite a bit” of the area, they didn’t turn up anything. “We’re going to continue searching,” he said.

As will local law enforcement. In an April 11 email, Lash said, “As of right now, the plan is to do an official search which will involve the Warden Service, Damariscotta PD, and Waldoboro PD within the next couple of weeks. An exact date has not been set yet.  We do not suspect anything suspicious at this time.”

Reached by phone on April 6, Damariscotta Police Chief Jason Warlick said, “We want people to know we have not forgotten about Doug Barter – I promise you that.”

“He was just a local fisherman; he loved his rock and roll …” Bennett said. “We can’t leave him behind. Lost. That’s not an option.”

Barter was last seen wearing blue jeans and a navy-blue sweatshirt with a marijuana leaf on the back. He is 5-foot-7-inches and weighs around 150 pounds. Bennett said he usually wore white gym shoes and carried a gray and brown bandana in his pocket.