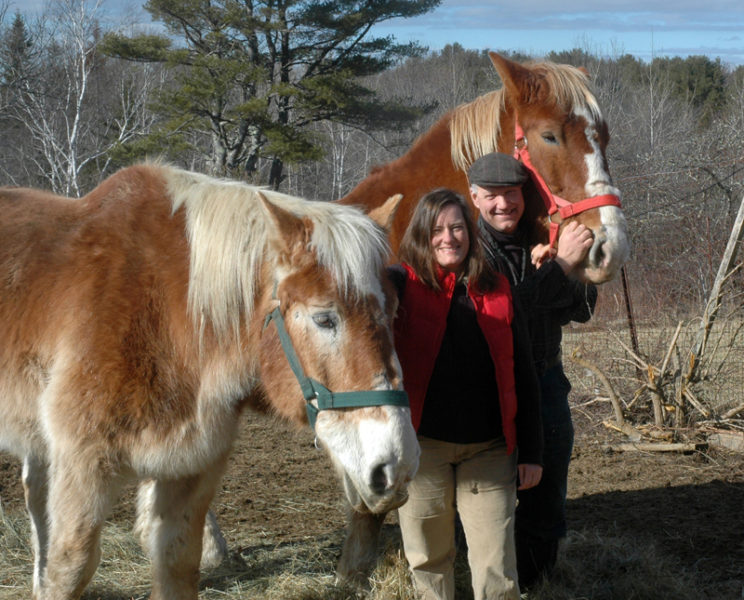 Allison Lakin and Neal Foley with their draft horses at East Forty Farm and Dairy on Friendship Road in Waldoboro. (Alexander Violo photo)

Allison Lakin and Neal Foley moved to East Forty Farm and Dairy in October 2016, looking to utilize the property to house and expand Lakin’s cheesemaking operation and Foley’s sawmill business.

According to Lakin and Foley, the property has been used as farmland since the late 18th century and has only been dormant for the past six years.

Lakin, who makes fresh and aged cheese using organic cow’s milk, first got involved in the process of cheesemaking in 2002, launching Lakin’s Gorges Cheese in 2011.

Foley, a farmer and chef, has 15 years of experience teaching cooking skills.

Additionally, Foley runs a sawmill at the farm, which has the capacity to mill logs up to 36 feet long. Foley also offers a mobile sawmill service that can conduct custom milling operations at locations away from the farm.

Lakin and Foley are using sustainable practices on their new farm, keeping the number of animals at a manageable level and using byproducts, such as whey from the cheesemaking process, to feed some of the animals the pair hopes to raise for meat. 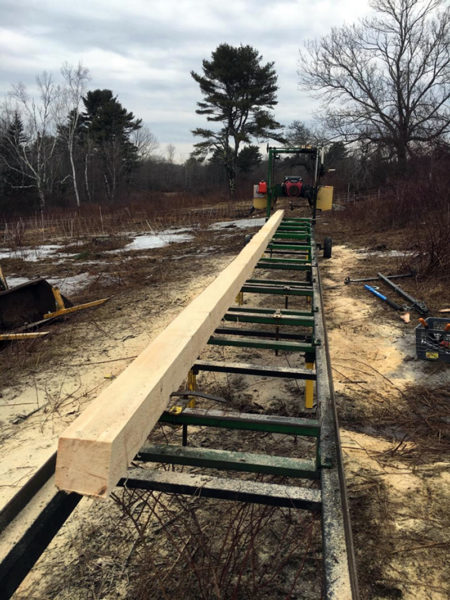 The sawmill at East Forty Farm and Dairy in Waldoboro cuts beams up to 36 feet long. (Photo courtesy Allison Lakin)

“We want the farm to be feeding itself as much as possible. And we want to share the things we produce here with the community,” Lakin said.

Foley said the farmers have been clearing pasture, while maintaining portions of the farm’s woodlands, especially apple and oak trees, whose apples and acorns can provide sustenance for farm animals in the fall.

Foley said that in order to mitigate the impact on the site and maintain the health of the forest, he has used a team of draft horses as he works to connect pasture on the farm and harvest logs from the property’s woodlands.

Both said that after speaking with their neighbors, there seems to be a lot of excitement around the property’s return to its traditional use as a dairy farm.

In addition to a Jersey cow named Darla, the farm has two Gloucestershire old spot pigs, Jig and Jag, a number of chickens and ducks, and two Belgian draft horses, Tony and Jack.

“I feel like I’m living in a children’s book,” Lakin said.

Lakin and Foley said they want to keep the farm at a level where it is not overburdening, projecting 12 cows as a ceiling for the farm’s herd.

They hope to breed the pigs and use the voracious creatures as part of the farm’s pasture reclamation process, employing rotational grazing to keep the property healthy.

Since starting her business several years ago, Lakin has leased creamery space from the State of Maine Cheese Co. in Rockport. She makes 150 gallons of milk into cheese each week.

Lakin has experienced a sustained uptick in sales growth and needed more space for her business.

She said roughly 90 percent of her customers are in Maine, and she spends every Thursday traveling Route 1 from Camden to Kennebunkport, delivering her products.

Lakin sells cheese online at lakinsgorgescheese.com and sells it wholesale to local restaurants, shipping cheese to Bangor and Blue Hill, as well as to customers in Boston and New York.

“I would like to expand the market beyond what I have been able to distribute myself. The biggest challenge for any food producer in Maine is distribution,” Lakin said.

She said the use of the space at the State of Maine Cheese Co. has been integral to her business’s success.

“It allowed me to build up the reputation of my brand without a big capital investment,” she said.

Lakin said she plans to convert the farm’s garage into the home of her new creamery, complete with aging caves.

She said the new space will allow her to expand aging space for her cheese, with two cheese caves in the new creamery for different types of cheeses.

“Cheese doesn’t become what you eat on a plate immediately. It goes through an aging process. You have to control temperature and humidity,” Lakin said.

She has a custom-built 10-by-10-foot cave in Rockport and a three-door reach-in fridge that is used for blue-mold cheeses and varieties that interact well with the type of strong cheese.

Though the creamery at East Forty Farm is not yet operational, the duo has opened a small shop at the farm, where cheese and handmade wooden cutting boards, crafted by Foley from lumber harvested on location, can be purchased.

Foley said that in the future, he wants to supplement the cheese and cutting boards with meat from pigs and steers raised at the farm.

The shop does not yet have regular hours, but is open for business if a pop-up sign at the end of the farm’s driveway is on display.

Lakin said she learned the art of cheesemaking at a facility with cows on site, and wanted to replicate this experience at the Waldoboro farm, being as close to the milk’s source as possible.

“From a cheesemaking perspective, I did it in reverse. Most people have access to milk and start making cheese. I was working at a museum, then started making cheese commercially on a large farm, and made the leap to start my business,” Lakin said.

In the future, Lakin hopes to use Darla’s milk in her cheese.

For now, Lakin uses cow’s milk from Tide Mill Organic Farm in Edmunds to make all of her cheeses, which are handmade and produced in small batches.

“As I’m expanding my business, I want to increase the amount of milk I can work with,” Lakin said. 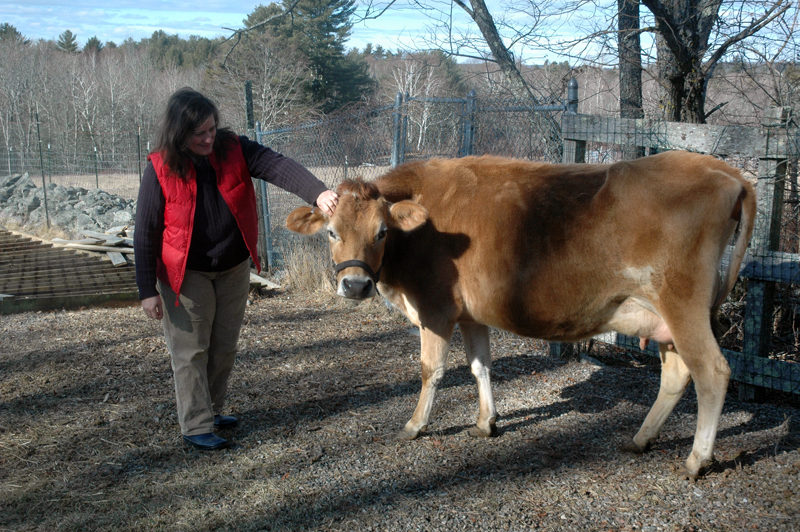 Some of the varieties Lakin makes include ricotta, Prix de Diane, Opus 42, and Cascadilla Bleu.

The ricotta is made with whole milk and unsalted, with a creamy and sweet flavor, whereas the Prix de Diane has full-bodied creaminess.

The Opus 42, a semi-firm cheese, is aged three to six months and has a sharp and nutty flavor, while the Cascadilla Bleu, a strong cheese, aged two months, has a peppery flavor.

Lakin said the taste of cheese, just like wine, can be impacted by “terroir,” factors in the natural environment, such as soil, topography and climate, where cheese-producing cows reside.

Additionally, Lakin said the characteristics of cheese can change based on the season.

She said the bulk of a cow’s diet in summer consists of foraged grass and clover, whereas their winter diet is made up of mostly hay, impacting the color and taste of the cheese made from their milk.

As they settle in at the farm, Lakin and Foley plan to host a number of on-site cooking classes, including a few upcoming cheese-themed workshops.

Lakin said she hopes the classes serve as a springboard for those looking to work with cheese.

“We don’t want people to be afraid of working with cheese,” Lakin said.

To reserve a spot in a class, go to shop.lakinsgorgescheese.com.

Lakin said she hopes the classes will be a year-long feature at the farm.

“We are excited for small classes to give people a hands-on experience,” Lakin said.

The couple has a nine-year lease with a purchase option at the end of the lease term, as well as an early purchase option after five years with Dirt Capital Partners, a group that invests in farmland in partnership with farmers throughout the Northeast, promoting sustainable land access and security.

Additionally, an easement purchased by Maine Farmland Trust, a nonprofit organization headquartered in Belfast, has helped secure the land’s usage as agricultural for years into the future.

The conservation easement, supported by the Medomak Valley Land Trust, permits ongoing agricultural and forestry activities on the property, but no future development, helping to protect 900 feet of river frontage and providing an approximately 7-acre buffer to the Medomak River.