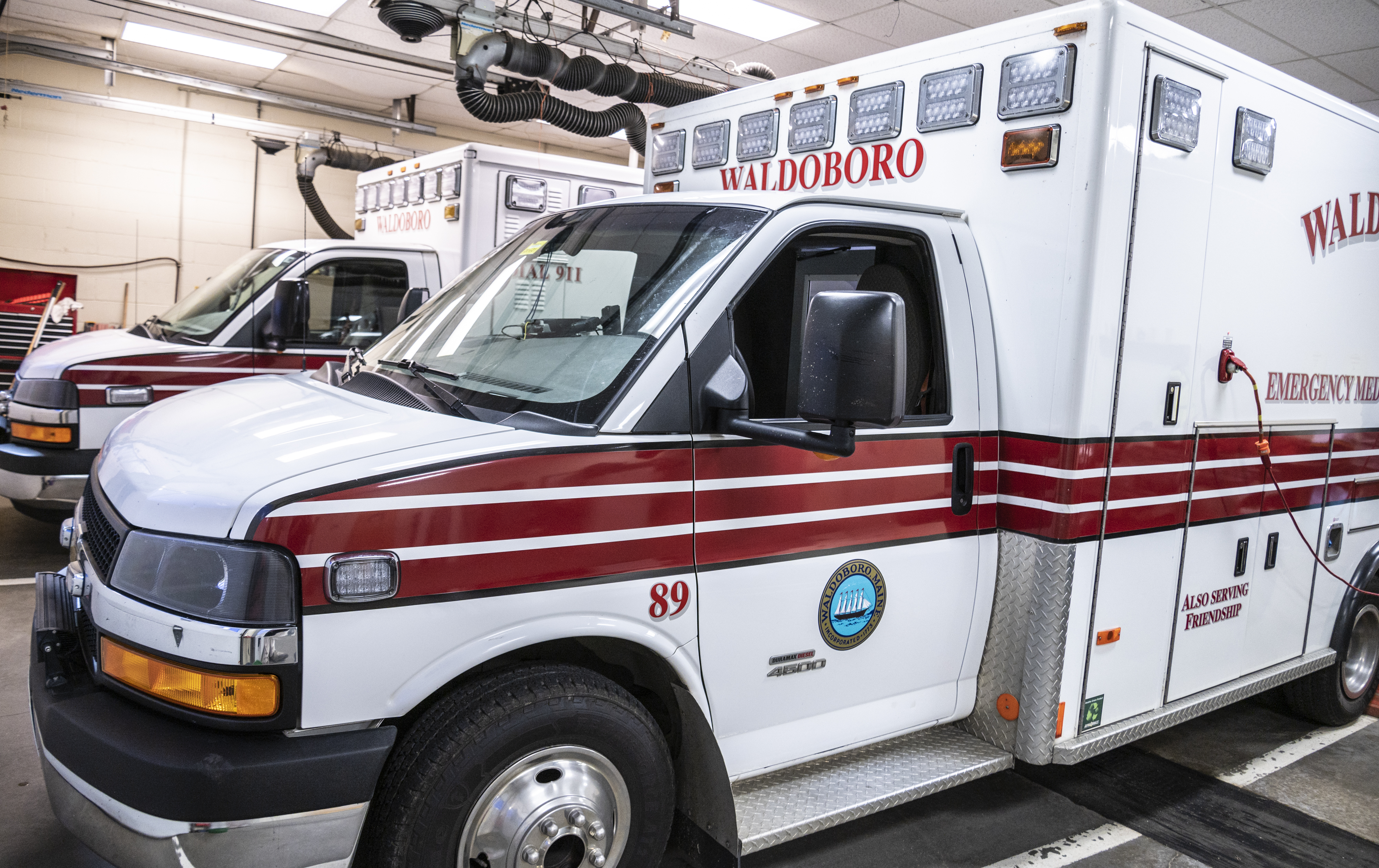 Two ambulances wait for a call in the EMS bays in Waldoboro on Tuesday, August 24. “I don’t know what the good answer is,” said EMS Director Richard Lash about staffing shortages that will hinder their ability to provide aid to residents in need of medical attention. (Bisi Cameron Yee photo)

Richard Lash, director of Waldoboro Emergency Medical Services, took the podium during the Waldoboro Board of Selectmen’s meeting on Tuesday, Aug. 24, to inform the board about staffing issues in his department.

Lash said that to be fully staffed, they need 10. Lash and Assistant EMS Director Derek Booker are recruiting on a daily basis.

Lash said the department is up 300 calls over last year with a higher acuity of 911 calls. He said their $938,000 budget helped some, but not as much as they had hoped.

“Derek and I are getting tired,” he said.

According to Lash, the department currently has 13 paramedics, 10 advanced EMTs, six basic EMTs and one driver, seven of whom are not very active and 22 of whom are somewhat active. Lash said that 11 Waldoboro EMTs work full time for other fire or EMS departments, and the rest all have full-time jobs.

Lash said the governor’s mandate that all EMT be vaccinated is also causing issues.

According to Lash, Wiscasset said they may lose six people if the government doesn’t back off the mandate; CLC may lose four. And Waldoboro is looking at losing three.

Lash said that not one person on the staff of the Waldoboro EMS that he knows of has contracted COVID since the beginning of the pandemic.

“Sometimes mutual aid to other towns in Lincoln County entails us leaving our town without a paramedic,” said Lash. But at the same time Waldoboro EMS is reliant on mutual aid themselves.

We need to pay them like they’re superheroes,” she said.

“I thought there was going to be a plan for someone to help us,” she said. But there is not. We’ve got to come up with these solutions ourselves.”

In other business, Karen-Ann Hagar, community navigator for Waldoboro, spoke to the board on issues around homelessness. She said the ban on evictions is lifting soon and Hagar said that those people who were given notice prior to COVID will be expedited and first on the list for eviction.

Hagar sees two to five families a week and she estimated that 85% of them have homelessness as a factor in their concerns, whether it’s repair to existing homes or the potential of eviction.

Hagar said that there are a lot of people currently living outside, in camp grounds, but once the weather gets cold, she said, “We’re going to be looking at a tsunami.”

“We’re not wanting to shift people out of our town,” Hagar said. There are currently no homeless shelters in Lincoln County. “The community needs to think outside the box about affordable housing.”

Other concerns Hagar is addressing include the need for school supplies and concerns around job retention, but housing is the number one issue.

Hagar said she’s seeing fewer people expressing a need for food. She said the food pantries have been stepping in effectively to combat hunger. But people still won’t ask for help when they’re hungry.

Fire Chief Paul Smeltzer passed out a schedule for the State Federation of Firefighters Convention coming up Sept. 9-12.

Smeltzer said there will be a 911 memorial service at the fire station, a parade, a banquet at the Samoset. And on Sept. 12, there will be a muster with a “Firefighter Olympics” on the town’s recreation field.

Smeltzer said that firefighters from all over the state of Maine are welcome and additional information is available on the town website.

The board approved the appointment of a new brown tail math committee with three members: Nancy Dail, Caren Clark, and Kaitlyn Puchalski.

The board also appointed three new members to the shellfish committee: Lee Bennett, Israel Harvey, and Selectman Will Pratt.