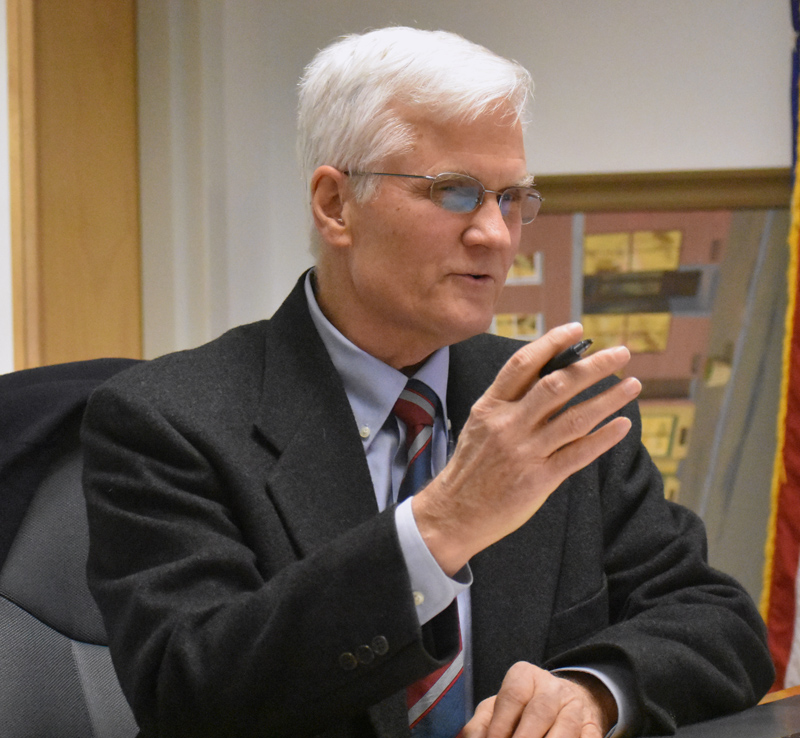 Waldoboro Board of Selectmen Chair Robert Butler speaks during a meeting Tuesday, Dec. 11. The selectmen voted to enter a lease-purchase agreement for a new ladder truck. (Alexander Violo photo)

The Waldoboro Board of Selectmen voted 4-0 to enter into a 15-year lease-purchase agreement for a new ladder truck Tuesday, Dec. 11.

The vote follows a joint meeting of the selectmen and the Waldoboro Budget Committee meeting on Monday, Dec. 10 and multiple presentations by Waldoboro Fire Chief Paul Smeltzer.

According to Town Manager Julie Keizer, the price tag on the lease is $1.024 million, however, the figure does not account for price reductions and other savings that will bring the total cost below $1 million.

“The amount in the resolution is not the amount we are paying,” Smeltzer said. In addition, the town would lose $30,000 if it waits until January.

The new ladder truck is a Pierce model, according to Keizer.

Prior to the board’s vote to enter the lease-purchase arrangement, the selectmen discussed the merits of a 10-year instead of a 15-year arrangement.

“My theory is, there are other things, in time, for the fire department, (self-contained breathing apparatus), other trucks need to be replaced, other issues, and I want to set a cushion,” Keizer said.

Smeltzer was in favor of the 10-year lease due to the better interest rate.

Board of selectmen Chair Robert Butler said the town would pay $127,000 less in interest with the 10-year lease.

The discussion of the ladder truck started after Keizer updated the board on the previous night’s meeting.

At Monday’s meeting, the selectmen and budget committee decided to proceed with the purchase, according to Keizer.

Regarding the question of whether such a purchase needed to go before voters, Keizer said the town’s attorney and auditor each said a lease-purchase agreement does not require a town vote, whereas a bond would.

Keizer said the ladder truck will be acquired via the Houston-Galveston Area Council purchasing program.

According to the council’s website, the program helps local governments reduce costs through a government-to-government procurement service.

Keizer said state law allows the practice and several Maine cities and towns have used it.

The program can also be used to acquire police cruisers and the town could have saved $10,000 on a cruiser purchase.

In addition to the board’s vote to enter the lease-purchase agreement, the board voted 4-0 to approve a resolution to participate in the cooperative purchasing program. Selectman Abden Simmons was absent.

Keizer spoke highly of the time and effort put in by the fire department to gather information on the purchase.

“This is something the fire department and Paul (Smeltzer) specifically agonized over. This is not a case of wanting a new truck. A lot of thought and care went into this. It has been an interesting process for sure,” Keizer said.

Budget committee member Craig Lewis asked about the availability of federal grant funds for the purchase.

Smeltzer said the town applied for a $500,000 federal grant.

Keizer said the town does not know whether it will win the grant and said the grants are difficult to win, but praised the work by planning consultants Bill Najpauer and Max Johnstone on the grant application.

“If we have a shot, they helped us quite a bit,” Smeltzer said.

Lewis asked if the lease could be refinanced if the grant is awarded.

Keizer said that would be an option and the agreement has no pre-payment penalty.

“This is time-sensitive for interest rates. Three years ago, if we bit the bullet, it would have been $70,000 cheaper and an easier lift in some ways,” Keizer said.