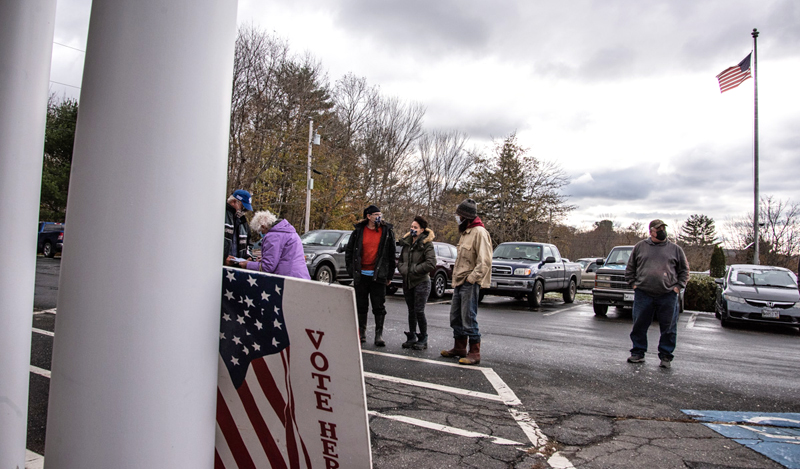 Voters wait in line at the Waldoboro municipal building Tuesday, Nov. 3. Waldoboro had 10 questions on a local ballot, including a much-debated referendum regarding the sale of A.D. Gray School. (Bisi Cameron Yee photo)

Waldoboro voters favor the transfer of A.D. Gray to Volunteers of America for redevelopment as affordable senior housing, indicating as much in a nonbinding referendum by a more than 4-to-1 margin.

In other nonbinding votes, voters supported the construction of a community center and improvements to the municipal building, although they want the town to spend as little as possible; indicated that they want the town to accept a donation of the Sylvania site and the nearby Hoffses homestead; and said they would like to see LincolnHealth build a new medical facility on town property.

The Sylvania vote was 1,794-1,017. The land has restrictions on its use due to industrial pollution.

The Waldoboro Recreation Committee will hold public forums to discuss the community center in detail, the town said in a comment on its Facebook page.

The town released partial results of the 10-question referendum Wednesday evening, after saying earlier Wednesday it did not expect to have results until late Thursday or early Friday. The town’s “amazing” ballot clerks were able to hand-count the six questions earlier than expected, the town said in a Facebook post. The rest of the results came out late Thursday afternoon.

The town had prioritized tabulation of national and state races after polls closed on Election Day and reported those results at 10:38 p.m. Tuesday, despite a hiccup with a vote-counting machine.

One of the town’s two machines was “spitting the paper back out,” but it was quickly repaired and “ran flawlessly” for the rest of the count, according to Town Clerk Marcus Benner.

The local ballots are not compatible with the machines, so poll workers had to count them by hand.

In a phone interview, planning consultant Max Johnstone said the town achieved its goal for the nonbinding questions, particularly in terms of gauging interest in the A.D. Gray and Sylvania proposals. Johnstone said the town did not want to spend time negotiating with Volunteers of America or Ledvance if voters did not support those proposals, but the strong positive response to both is a green light to explore them further.

Johnstone stressed that no transfer of land has taken place in either situation. “The next step is to negotiate to see if we can come to agreeable terms, followed by discussion with the town select board and public notice of proposals before any action is taken,” he said.

Town Manager Julie Keizer said that, “no matter what the answers were, we are happy to have guidance from the public.”

After sending a 2019 survey to 2,100 homes and only receiving 10% back, the referendum gave the town a unique opportunity to “gauge and engage” with 78% of registered voters participating. Both Keizer and Abden Simmons, chair of the board of selectmen, believe the tactic got people talking and gave town officials a good idea of how voters want the town to move ahead. “Hopefully people stay engaged,” Keizer said.

Tibby Kull, whose property abuts A.D. Gray, opposes the sale of the building. “VOA is a fine organization, but I’m not crazy about turning the building into senior housing,” she said, citing the steep hill seniors would have to negotiate and difficulties in providing services to potential residents.

“I would love to see the town turn it into a park,” Kull said. She wants the town to reap a financial benefit from the property.

“We need to attract some younger families who will stay, raise their kids, pay taxes,” she said, and she does not see the financial benefit in the Volunteers of America plan.

Sumner Richards, who at one time owned and operated S. Fernald’s Five and Ten in Waldoboro, is in favor of the A.D. Gray sale, saying, “We need housing, period. Quite desperately.”

Johnstone said the town and Volunteers of America will enter into an agreement that the town will not sell or demolish the building for a year, giving Volunteers of America time to acquire funding and flesh out its plan to see if the project is feasible. “We’ve been waiting years for something to happen. I don’t mind waiting one more year to get it done,” Johnstone said.