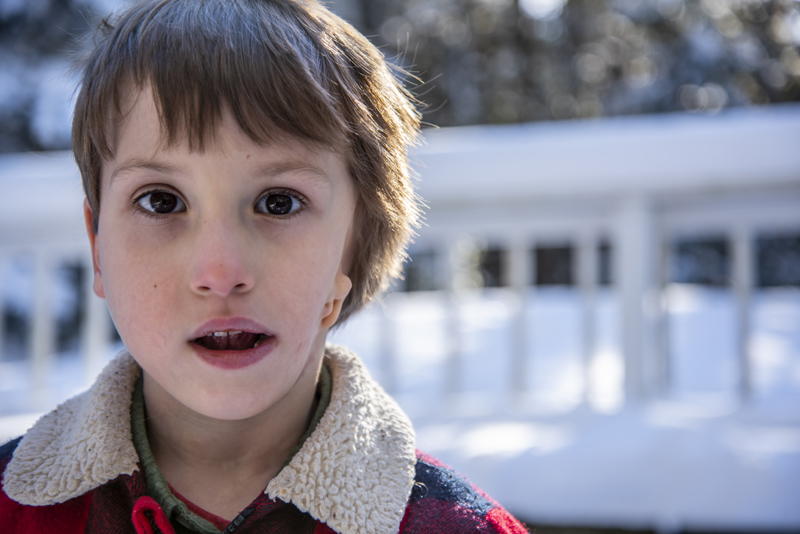 Hayden Libby poses for a photo at his home in Waldoboro on Saturday, Dec. 19. Libby was born with hemifacial microsomia, a genetic defect that caused the left side of his face to be less developed than the right. (Bisi Cameron Yee photo)

Sheila Libby remembers listening to the beeps. Those sounds in the hospital after the birth of her son Hayden were audible symbols of his condition.

Hayden Libby was born only 28 weeks into his mother’s pregnancy. He would spend the first 6 1/2 months of his life in the hospital. Much of that time was spent addressing the host of problems resulting from his premature birth. But those weren’t the only challenges he faced.

Hayden was also born with hemifacial microsomia, a genetic syndrome in which one side of the face is underdeveloped. The bone, cartilage, and fat on the left side of Hayden’s face, from his neck to his eyes, are affected. 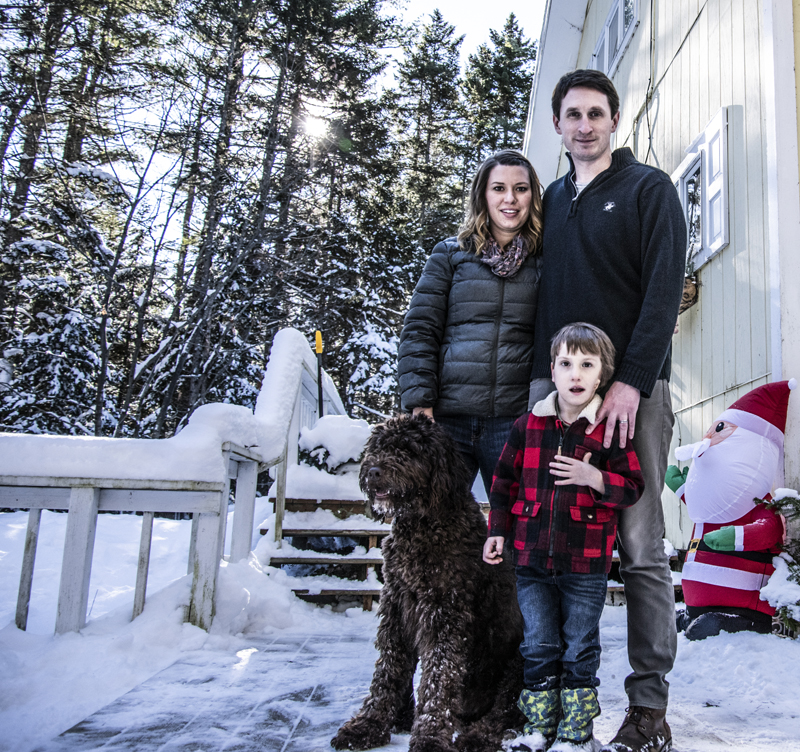 Hayden Libby poses for a family photo with parents Sheila and Ross, and best friend Hershey. Hershey is a Newfoundland-poodle mix who became a member of the family last spring. (Bisi Cameron Yee photo)

As a result of hemifacial microsomia and its impact on his airway and jaw, Hayden suffered from severe sleep apnea. Ross and Sheila Libby described listening to Hayden breathe at night, holding their breath when he stopped, breathing again when he started.

When he was in the hospital as a baby, the nurses had to come in multiple times a day because he had stopped breathing. “I don’t know how many times he was on a ventilator and got off just to be intubated again within a day or so,” Sheila Libby said.

“It was traumatizing — for him and for us,” Sheila Libby said. But it was necessary in order to move his jaw forward and open his airway.

Between his premature birth and genetic syndrome, Hayden has already had 10 surgeries in his five years of life. He has reached a point where the riskiest surgeries are over and his parents no longer worry that he will stop breathing.

But there is one more surgery they want for their son — to reshape his left ear and engineer a way for him to hear from it. 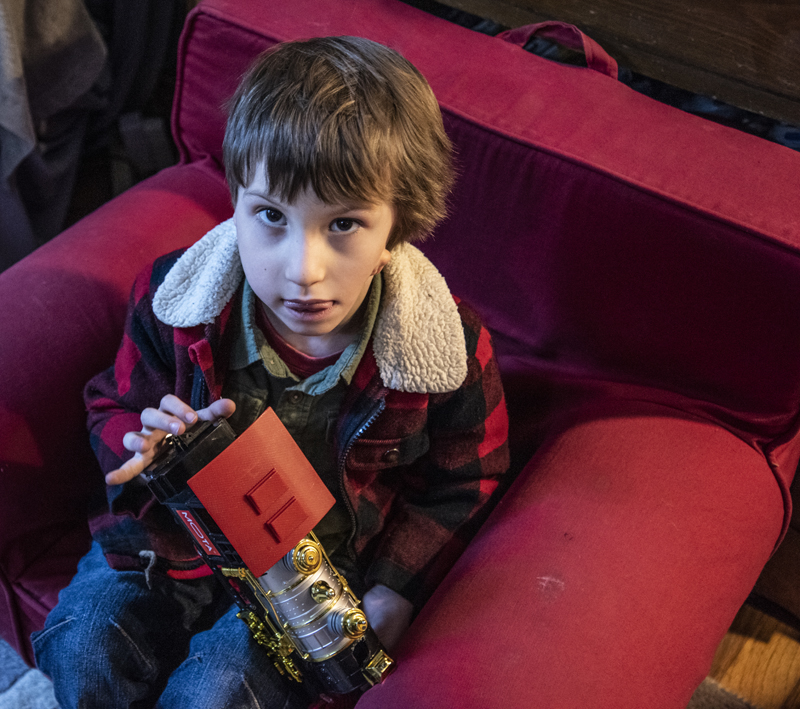 As a result of his genetic syndrome, Hayden is affected by microtia (an underdeveloped ear) and atresia (no opening for his ear canal). A doctor in California developed a solution that could help Hayden in a single surgery.

MEDPOR ear reconstruction uses synthetic material instead of harvesting rib cartilage to reshape the ear. And a bone-anchored hearing system could be implanted at the same time. But the procedure is expensive and insurance won’t cover it. 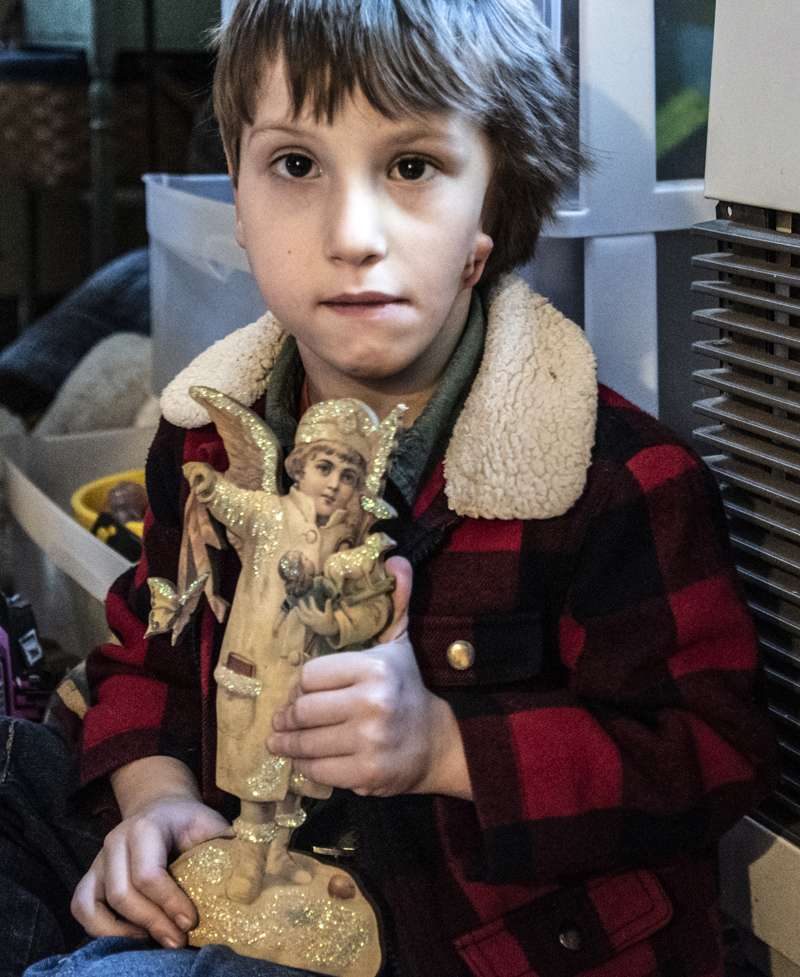 Hayden Libby holds a Christmas angel at his home in Waldoboro on Saturday, Dec. 19. Hayden’s parents started a fundraiser for a surgery that would reconstruct his left ear and allow him to hear from it. (Bisi Cameron Yee photo)

After years of tackling their son’s health issues on their own, Ross and Sheila Libby made the hard decision to ask for help in raising the $70,050 required for the surgery. They had shared Hayden’s story with friends and family, but had never turned to social media.

At the end of November, Sheila Libby wrote a heartfelt introduction to a GoFundMe page for Hayden. It took her two weeks to post it. “It’s what my child needs,” she said, “and if that’s what we need to do for him, that’s what we do.”

“Hayden understands it means more doctors, it might mean more hospitals,” Sheila Libby said. “He understands as much as a 5-year-old can — he says, ‘I’m nervous.’”

But he struggles with his favorite activities — playing soccer, hide-and-seek. He has trouble hearing through background noise or pinpointing the direction of a voice.

“It’s exciting to think about how he will be able to hear the coaches and play with other kids — not wait and watch and guess,” Sheila Libby said.

Hayden wants a “big ear — like Mom and Dad” — and “a lot of people who don’t know him and he doesn’t know are helping,” Sheila Libby said.

The Libbys have been overwhelmed by the kindness of their community, including unexpected donations from the Searsport First Congregational Church, the Nobleboro Fire Department, and their community on Dutch Neck Road in Waldoboro. Between community donations and a $15,000 grant from the Small Wonders Foundation, the Libbys are almost halfway to their goal.

To make a donation toward Hayden’s surgery, go to gofund.me/2b893da3 or give to the “Sheila Libby for Hayden” account at a local branch of First National Bank.