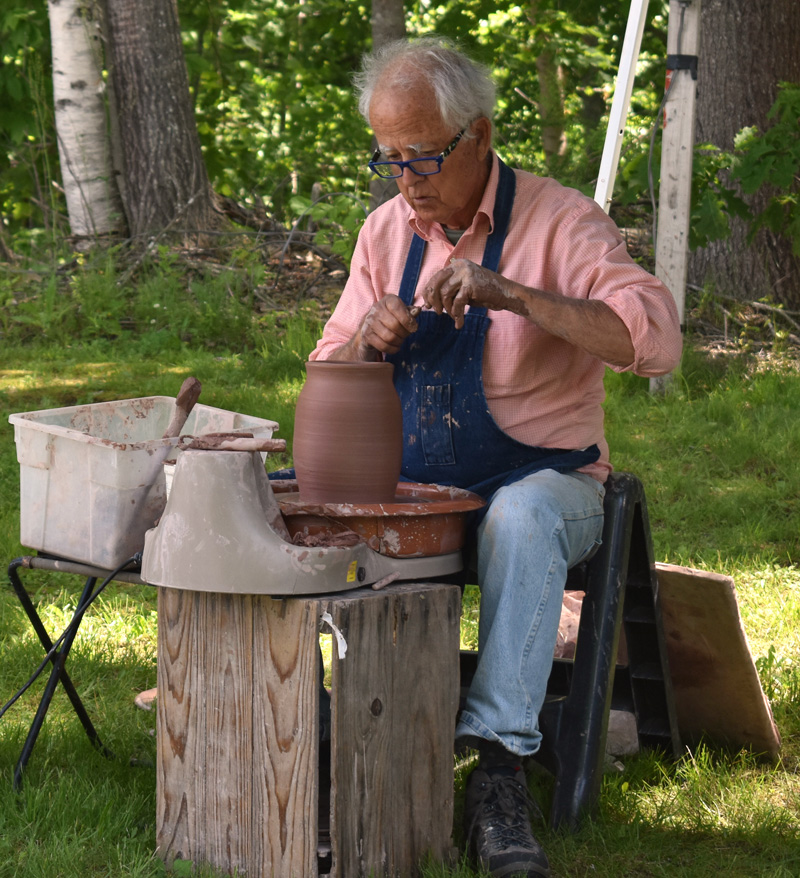 McCabe Coolidge, a potter based in South Thomaston, works at the Waldoboro Farmers Market on Saturday, June 22. (Alexander Violo photo)

Last year, the Waldoboro Farmers Market moved from Cider Hill Farm, on Main Street, to the lawn of the municipal building on Route 1. This year, the farmers market is open on Saturday mornings for the first time, instead of Wednesday evenings.

The farmers market opened for the season on the sunny, warm morning of Saturday, June 22. The market will be open from 9 a.m. to noon every Saturday through Sept. 14.

The Waldoboro Farmers Market provides residents and visitors with access to local produce and other farm products, while contributing to the community, according to President Steve Warren.

Warren said last year’s move to the municipal building was prompted by a desire to take advantage of the high volume of traffic on Route 1 during the summer.

“There’s a lot of drive-by traffic in this location,” he said.

Warren, a vendor himself, said the more recent change to Saturdays is another effort to increase exposure for the market and its vendors.

Warren said last year’s farmers market had a better June than in previous years before traffic slowed down in midsummer. Business picked up again at the end of the year.

“We decided there was potential for the weekend and heard 6 p.m. wasn’t always feasible, so we changed to mornings,” Warren said.

Warren sells a variety of plants through his business, Pine Street Gardens, and believes vendors will benefit from the change.

“I think everyone has a little better feeling about it,” he said.

Warren said Camden also has a farmers market on Saturday, but besides that, there isn’t a lot to compete with during the time slot.

“I think there was a much better turnout. … There are more people out and about and I think it was a good change. I like the day and the time,” Price said.

Price’s first year as a vendor was last year, the market’s first at the municipal building.

While she is selling baked goods at the moment, she may add her own artwork and fleeces from her sheep as the summer progresses.

“We welcome anyone interested in selling something they made or produced,” she said.

Warren said the market would have opened a week prior, but a lot of vendors were busy with Waldoboro Day, leading to the June 22 opening.

The opening farmers market of 2019 featured nine tents: pottery from McCabe Coolidge, of South Thomaston; poultry and produce from Three Duck Farm in Warren; snacks from Sweet Morning Bakery; sustainable and organic goods from Switchback Farm in Nobleboro; vegetables from Alna’s Sealyon Farm; soap from Almost Edible Soaps, of Waldoboro; Pine Street Gardens, of Waldoboro; Midcoast Conservancy, of Edgecomb and Waldoboro; and a tent collecting donations for a town gazebo, in addition to distributing information on local organizations, such as the Waldoborough Historical Society.

“We have nine today and we are looking to be in the nine to 12 range this year,” Warren said.

In addition to vendors, the grounds of the municipal building feature two children’s gardens, started by Kathleen Cartwright when the market was at Cider Hill Farm.

The gardens grow a number of vegetables, including cabbage, peppers, pumpkins, and squash. “It gets kids into a garden,” Warren said.

Selectman Katherine Winchenbach was at the farmers market to collect donations and feedback on the gazebo, a proposal she wants to continue discussing at selectmen’s meetings.

Looking forward to future seasons, Warren said his hope is for the farmers market to grow.

“We are looking to expand. There are 15-18 local farms in the area that have expressed some interest, in addition to craftspeople. The switch to this location and the weekend is to make us more attractive to vendors. It’s a little bit of wait and see,” Warren said.