A new food truck in Waldoboro serves fresh seafood with flavor, with fish and chips, fish tacos, and lobster rolls among its most popular selections. 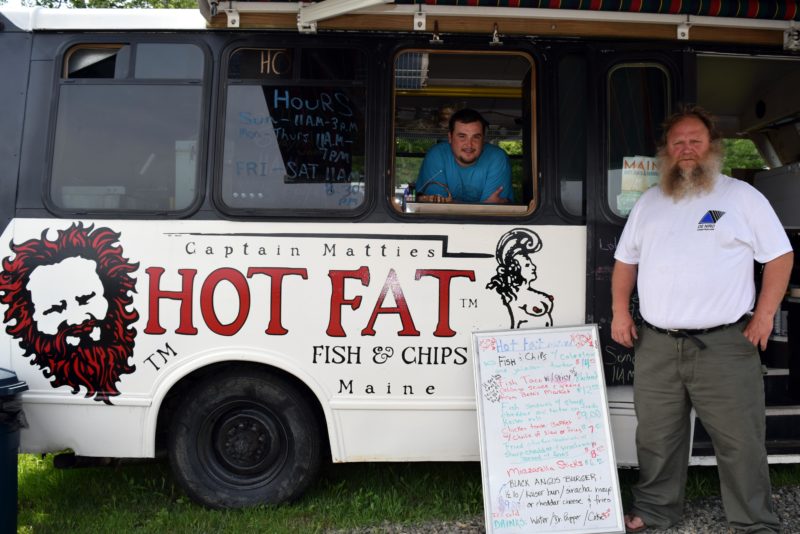 Business partners Justin Barker and Matthew “Captain Mattie” Thomson make up the team behind the truck.

Thomson, of Monhegan, started Hot Fat about a decade ago in a trailer next to his house on the back side of the island.

Thomson captains two fishing boats – the groundfishing vessel Fairwind and the lobster boat Saretta – and Hot Fat was originally an experiment in selling his own fish.

Several years later, Thomson met Barker when both worked on the research vessel Shearwater out of Boothbay. The boat was conducting research for Statoil, a Norwegian energy company then planning an experimental offshore wind farm.

Thomson was the second mate and Barker was the cook. After the job ended, Thomson offered Barker a job fishing and running Hot Fat. Barker arrived on the island in September 2012 and has been working with Thomson ever since.

Last year, the duo decided to expand and bring the business inshore. Thomson found a truck in Biddeford through Craigslist. Eric Sawyer, of Warren, a designer who specializes in stickers and “vehicle wraps,” gave the truck its distinct look.

The new Hot Fat food truck opened for the first time at Warren Day the weekend of June 24 and 25, opened in Waldoboro on July 1, and traveled to Thomaston for the Fourth of July.

Thomson and Barker chose the Route 1 location through a connection with the Delano family. Dustin Delano, a grandson and nephew of Delano Seafood’s owners, worked as a fisherman out of Monhegan for two years. 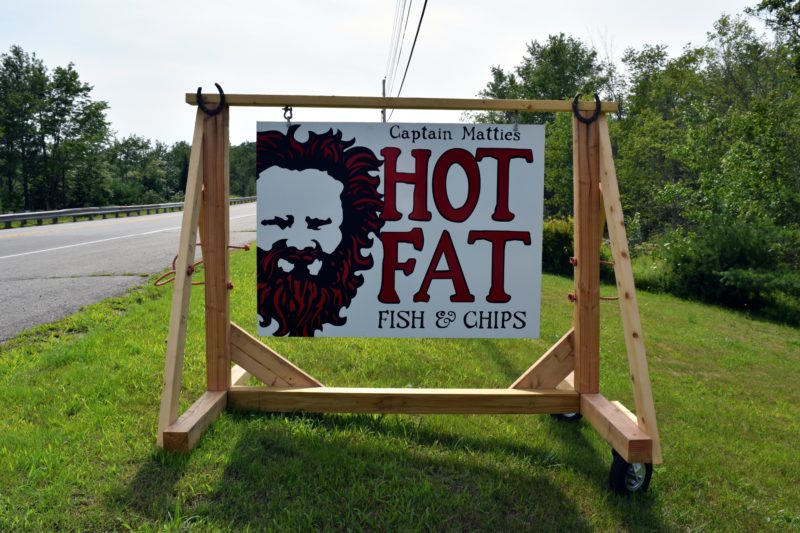 The food truck also continues to travel to special events. It will be at the Maine Boats, Homes, and Harbors Show in Rockland from Aug. 12-14, and has some private events at Warren’s Harmony Hill Farm on the calendar.

Barker runs the day-to-day operations at the food truck. Thomson assists Barker at special events, but he has other interests to manage, like a kayak rental business on Monhegan.

“Justin pretty much runs everything in here. He’s the chief cook and bottlewasher, head chef, sous chef, dishwasher – a man of many hats,” Thomson said.

Barker, originally of Pensacola, Fla., now splits his time between Monhegan and Warren. He has been a cook since he was a teenager, often in fine-dining establishments, but he likes the direct interaction with the public at Hot Fat.

“Dealing with customers face to face and cooking is more enjoyable for me,” he said.

Barker aims to use fresh, local ingredients as much as possible. He and Thomson would eventually like to catch most of the seafood themselves. In the meantime, they buy much of their seafood from the market next door.

The menu includes a fish sandwich with sharp cheddar and tartar sauce – regular or jalapeno – on a fresh kaiser roll ($9) and a fish taco with spicy red cabbage sauce and fresh greens from Beth’s Farm Market in Warren. “If you have to ask how spicy, it’s too hot for you,” according to the hand-written menu.

Other items include a lobster roll with fries ($15), fried shrimp ($9 or $12 for a basket with fries and coleslaw), and, of course, fish and chips with tartar sauce and coleslaw ($14). The potatoes for the french fries also come from Maine.

Hot Fat has more than seafood: the menu also offers a fried chicken sandwich with sharp cheddar and Sriracha mayo ($8), a grilled chicken sandwich with Swiss cheese and tzatziki sauce ($8), a half-pound black angus burger with cheddar and Sriracha mayo on a kaiser bun ($9), and a hot dog ($5). Sides include fried mushrooms ($6), mozarella sticks ($6), and sweet potato fries ($4). Several of the meals come with fries.

Barker makes all the sauces himself: the spicy red cabbage sauce, the Sriracha mayo, and the tzatziki sauce, as well as a dijonnaise sauce and a cocktail sauce with extra horseradish for the shrimp. “It’s tangy,” Barker said. “It’s got a nice bite.” 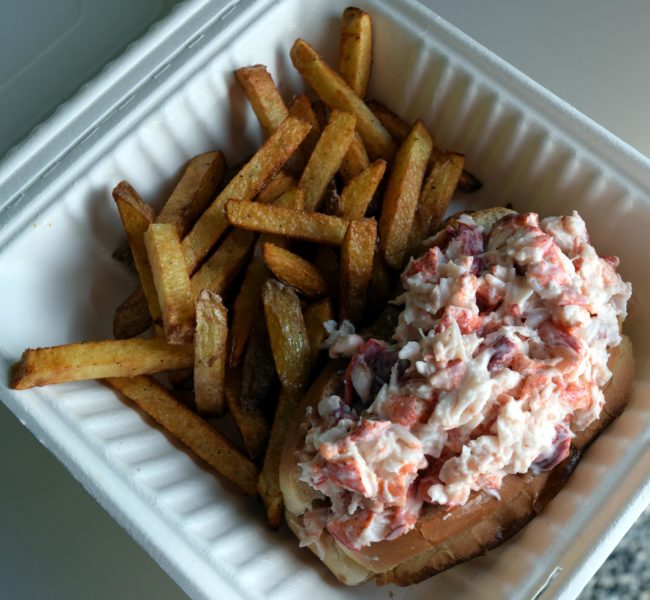 The “best lobster roll in five counties” is among the most popular menu items at Hot Fat. (J.W. Oliver photo)

Hot Fat’s fish tacos were its most popular menu item on Monhegan, according to Barker, while mainland customers seem to like the fish and chips and the lobster rolls.

The lobster rolls were the choice of a handful of customers during the late afternoon of Thursday, July 28. “It’s the best lobster roll in five counties,” Barker said to one inquiring customer.

For more information, follow Captain Mattie’s Hot Fat Fish & Chips on Instagram and Twitter. As a one-man show, Hot Fat accepts takeout orders as long as the chef can reach the phone. To place an order, call 850-382-1765.