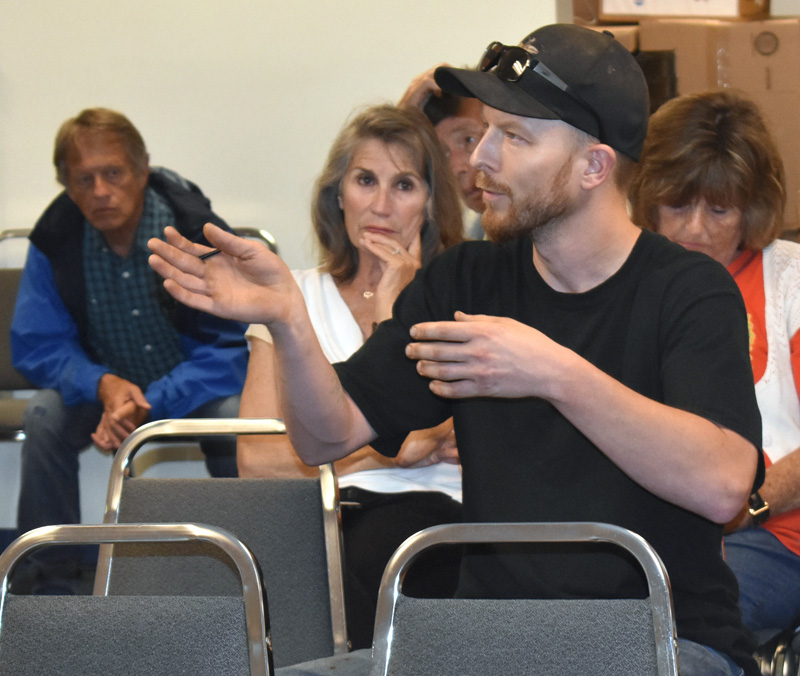 A public meeting about plans to improve and rebuild the boat landing at Dutch Neck Marine Park drew a full house of neighbors and others to the Waldoboro town office Monday, July 22.

The hearing is an early step in the design phase of the restoration project.

The Waldoboro Board of Selectmen authorized Gartley & Dorsky Engineering & Surveying Inc. to develop a plan for potential improvements June 25.

The hearing allowed the public to chime in on facets of the town’s request for proposals, which directs the engineering firm to plan for replacement of the concrete slabs, widening of the launch, stormwater drainage, and the reconciliation of the commercial and recreational uses of the landing.

William Lane, vice president of Gartley & Dorsky Engineering & Surveying Inc., was on hand to solicit ideas from the public.

The first comment was from John Grotton, resource and production manager at Atlantic Laboratories Inc., of Waldoboro, a processing facility for rockweed.

Grotton said the company uses the landing as an extraction location for rockweed and the landing’s current layout is difficult to navigate for the trailers they use to load the rockweed.

“Right now you end up tracking off the corner and your back wheels can end up in the ditch,” Grotton said.

Grotton said the current angle and grade of the landing also present difficulties and removing trees from the center island of the landing could make the landing more accessible for commercial harvesters.

“Leaner angles going in and coming out would be best for us,” Grotton said.

Elaine Abel asked about the purpose of the request for proposals.

“The purpose of this is to get an engineering design from Gartley & Dorsky. That’s the whole point of this,” said Max Johnstone, a planning consultant to the town.

Johnstone said the process for the Dutch Neck landing will be similar to the process during the Pine Street Landing project, and another request for proposals will go out for the construction phase.

According to Lane, the intent of the project is to preserve the commercial and recreational uses of the facility.

“We expect to have the current users, some clammers, some fishermen. Ostensibly we aren’t changing the character of the existing commercial use,” Lane said.

Nadine Gerdts said she is interested in a space that accommodates both commercial and recreational users. 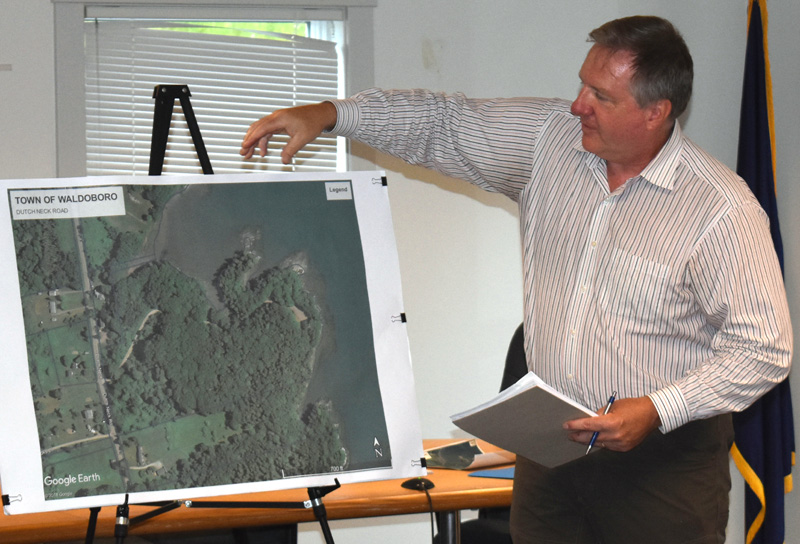 Scott Simpson, chair of the town’s planning board and a resident of Dutch Neck Road, said most of the conflict between commercial and recreational users occurs when low tide coincides with optimal kayaking times.

Simpson said there has been discussion on widening the landing in the past, while also mentioning the possibility of dividing the landing with a stripe down the middle.

Ralph Johnston, of Dutch Neck Road, asked about the current condition of the landing and if work at the landing has to go through the U.S. Army Corps of Engineers or state regulatory agencies.

“For projects under the annual high-tide line, we serve many masters, the Army Corps and (the Maine Department of Environmental Protection),” Lane said.

Lane said the work also falls under the purview of the Maine Department of Agriculture, Conservation, and Forestry.

Regarding the landing’s condition, Lane said the town’s public works director determined it was in need of replacement.

“I don’t anticipate reusing any of the materials,” Lane said.

Simpson elaborated on the landing’s condition.

“The upper part is really nice, but the lower part is starting to fall apart. There is rebar coming out and you can trip launching a kayak,” Simpson said.

Additional public comment favored adding signage to inform recreational users of the commercial use of the landing.

Elaine Johnston, of Dutch Neck, said parking on the landing’s ramp should be avoided, as it complicates the loading and unloading process.

Abel asked about adding a small path to the south of the landing where kayakers could drag their watercraft in.

Lane said he could look into creating a secondary launching area for kayaks.

“I’d have to research the tides. There could be another alignment where a hand-carry zone could work,” Lane said.

James Russo, a member of the planning board and resident of Butter Point Road, off Dutch Neck Road, asked about a redesign or improvements to the road around the landing.

“The road really is in rough shape. It would be a shame to create a beautiful park down there and have to go through hell to get to it,” Russo said.

“I don’t know if the town is committed, but if there is interest, I will add it to the list,” Lane said.

The town received a $24,000 Shore and Harbor Grant from the Maine Coastal Program for the engineering work. The town will provide a $6,000 in-kind match.

The town sent a request for proposals to four engineering firms, according to Johnstone. Only Gartley & Dorsky responded.