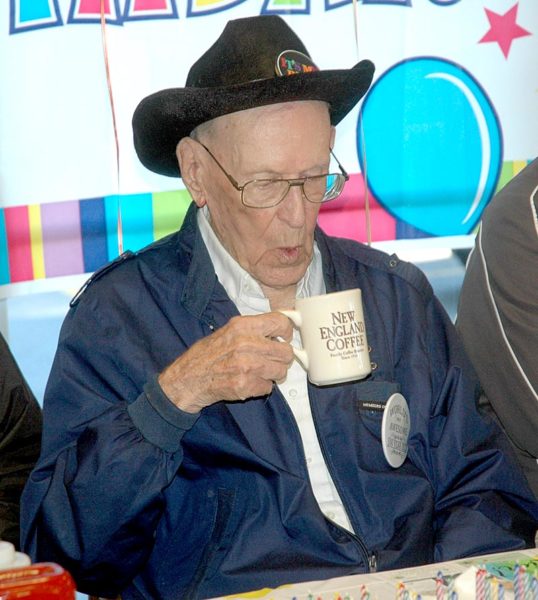 Woody Verge, of Waldoboro, enjoys a cup of coffee during his 100th birthday breakfast at Moody’s Diner. (Alexander Violo photo)

A Waldoboro man celebrated his 100th birthday with more than 20 family members and friends at Moody’s Diner on Monday, Sept. 25.

Woodrow J. “Woody” Verge was the center of attention Monday morning at his birthday breakfast.

Verge can often be found at the iconic Waldoboro restaurant in the morning, with family members describing him as a fixture of the diner’s breakfast crowd, making the local hangout a logical choice for the location of his birthday party.

“It gets him out of bed every morning,” Verge’s granddaughter, Sonia Bates, said of the local diner.

For his birthday, the new centenarian was joined by five generations of family.

Bates described Verge as a jack of all trades. He attended school in Thomaston and later lived in Friendship and Waldoboro.

Verge retired from working as a bus driver for Georges Valley High School in Thomaston when he was 88. At the time, he was the oldest bus driver in the state.

He then continued working for a couple years, completely entering retirement after a stint working maintenance at Coles Hill Apartments in Waldoboro. 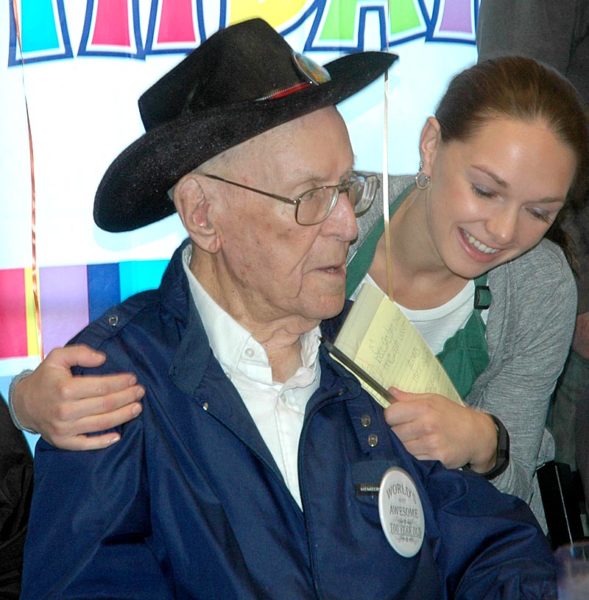 Woody Verge gets a birthday hug from Shannyn Soule at Moody’s Diner the morning of Monday, Sept. 26. (Alexander Violo photo)