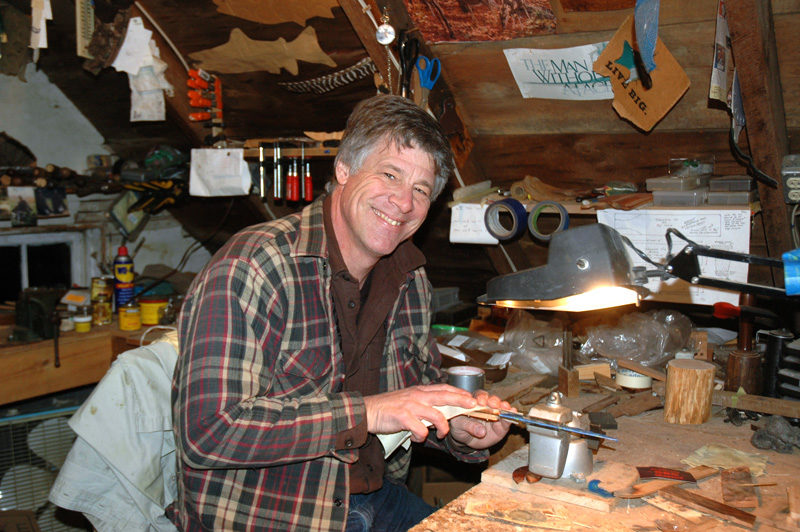 Michael Stenstrom works on one of his custom knives in his workshop in Waldoboro. The outdoorsman makes the knives from scratch, even milling the wood for the handles. (Alexander Violo photo)

A Waldoboro resident uses his passion for the outdoors and his expertise as an outdoorsman to make custom knives, turkey calls, and other tools for his fellow fishermen and hunters.

Michael Stenstrom, a registered Maine guide and junior high science teacher at Great Salt Bay Community School in Damariscotta, spends time in the Maine wilderness whenever the opportunity presents itself.

“I just like being outdoors as much as I can. It’s what really grounds me,” Stenstrom said.

Stenstrom said his experience in the outdoors sparked his interest in founding his business, Outdoorsman’s Edges, which creates custom knives and box calls for turkeys.

He works to find the blade style and wooden handle his customers desire and will even shape a knife’s handle to fit a person’s grip. His clients can also help choose the pins and guards that work best.

“You get to pick out the blades. The exact length and size is up to you,” Stenstrom said.

Stenstrom said he strives to create tools, whatever they are, that are both meaningful and functional, with the ultimate goal to enhance the outdoor experience for outdoorsmen and women.

He emphasized the sentimental value of outdoor experiences, noting hunting and fishing techniques are often passed from generation to generation. In this spirit, he makes heirloom-quality products that can be passed from parent to child.

“For lots of hunters and fishermen, it’s a tradition. The places they hunt and fish have meaning and memories, and this is a way for them to hold onto them,” Stenstrom said. 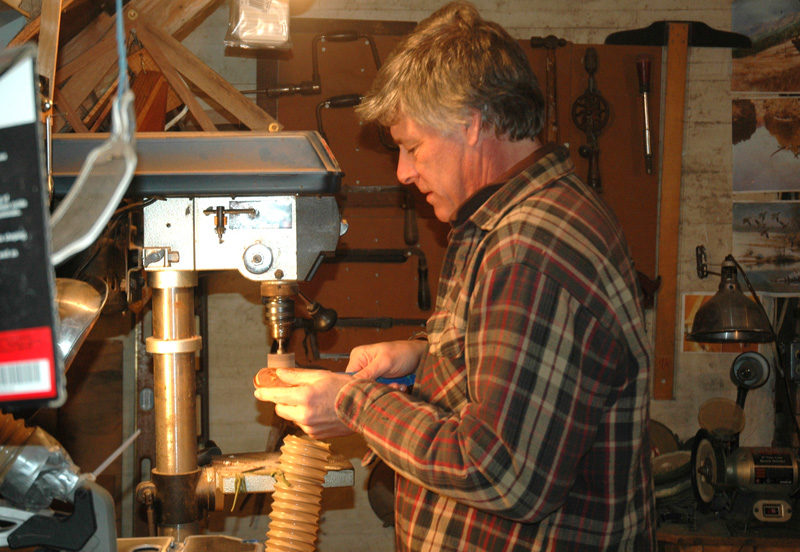 Michael Stenstrom uses a drill press as he works on one of his custom knives in his workshop on Goshen Road in Waldoboro. He modifies the handles of his knives to ensure they fit the user’s hand comfortably. (Alexander Violo photo)

Stenstrom’s passion for his craft is readily apparent to those who enter his workshop, a space above his garage adorned with woodland-inspired décor, full of the rich smell of wood shavings.

“Working with the wood is the fun part for me. How the different types of wood smell when you are working with them is great,” Stenstrom said.

Stenstrom said the work gives him freedom and connections, as he forms friendships with many of his clients.

He said he has been making knives for about 12 years.

He said he preferred to make knives by hand initially to gain a proper feel for the process, and only had a few tools at his disposal anyway. Now he has several machines to assist in the process.

The process starts from scratch, with Stenstrom ordering the blades from a supplier and milling and drying the wood for the blade’s handle. 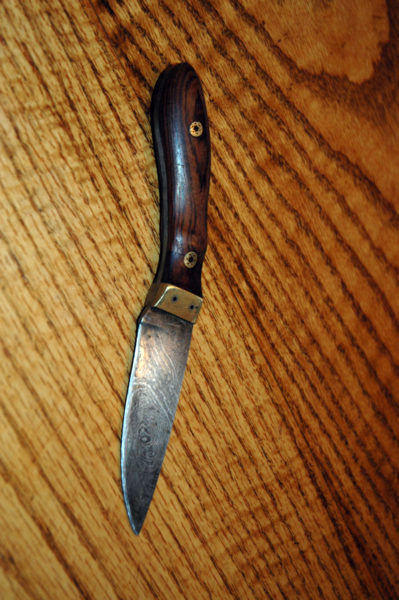 One of Michael Stenstrom’s handmade knives. He said he has used the knife for years and it features a Damascus steel blade, composed of two different types of metal. Unlike stainless steel, Damascus steel changes tone with repeated use. (Alexander Violo photo)

Stenstrom cited his love of traditional archery hunting, a style of the sport utilizing wooden bows, as the impetus for creating natural wood-based products.

“I like the feel and body of a wood knife,” Stenstrom said.

Stenstrom said he has more experience making small knives, but will work with customers to make what they need.

“If someone wants a knife with a 9-inch blade, I will work with you,” Stenstrom said.

Stenstrom said he has made or is making knives from a variety of different materials, from birch to antlers, as well as blades created from the same wood used in a particular  rifle stock or bow.

He said each knife takes a different amount of time to make. The project includes a number of tasks, from hand-sanding the wood to metalwork that usually takes a substantially larger time commitment.

“It varies, but it usually takes four to five hours a knife to put it together and get it to the spot I really like,” Stenstrom said.

The craftsman grew up in a suburb of Springfield, Mass. and discovered his love of hunting and the outdoors through an archery class at the University of Massachusetts Amherst.

“When I started shooting a bow, I totally fell in love with the sport. When I graduated, I got a dog to bird-hunt with and kept expanding my hunting experience,” Stenstrom said.

He said hunting was not something he was brought up with, but something he learned by studying animals. He made his own decoys when he first started bird hunting.

Though he hunts primarily in Maine – he said 99 percent of his hunting occurs in Lincoln and Knox counties – he has taken hunting trips to Montana and Texas, and even appeared on an ESPN 2 hunting show, “Wayne Pearson’s Ultimate Outdoorsman,” that was shot in South Carolina.

After school, he worked in construction before getting his teaching certificate.

Stenstrom spent the next 23 years teaching – the first year as an ed tech at Nobleboro Central School and the next 22 as a seventh- and eighth-grade science teacher at GSB, where he also coaches archery.

Currently he crafts knives and calls part-time. He uses the income to keep his business’s website running, while also earning some extra spending money and enough funds to keep his hobby going.

He said he also sees the business as a means to provide himself with a source of income in retirement.

Though most of his knives are used for hunting and fishing, Stenstrom also crafts kitchen cutlery, from the set of kitchen knives his wife uses, made from a black walnut tree from her family’s home in Ohio, to new sets of stainless steel utensils available at Riverside Butcher Co. in Damariscotta.

Stenstrom also uses his own knives, and showed off one well-used piece he has hunted and fished with for years.

He explained the knife has a bocote handle and a Damascus steel blade, a style that originated in the Near East and is made by taking different types of metals and heating, folding, and pounding them in a manner that creates flowing patterns.

Stenstrom offers a variety of different types of knives for outdoor use, working with both big-game and small-game knives, in addition to specialty blades and pocket knives.

For more information, go to Stenstrom’s website at outdoorsmansedges.com or find Outdoorsman’s Edges on Facebook. Gift certificates are available.