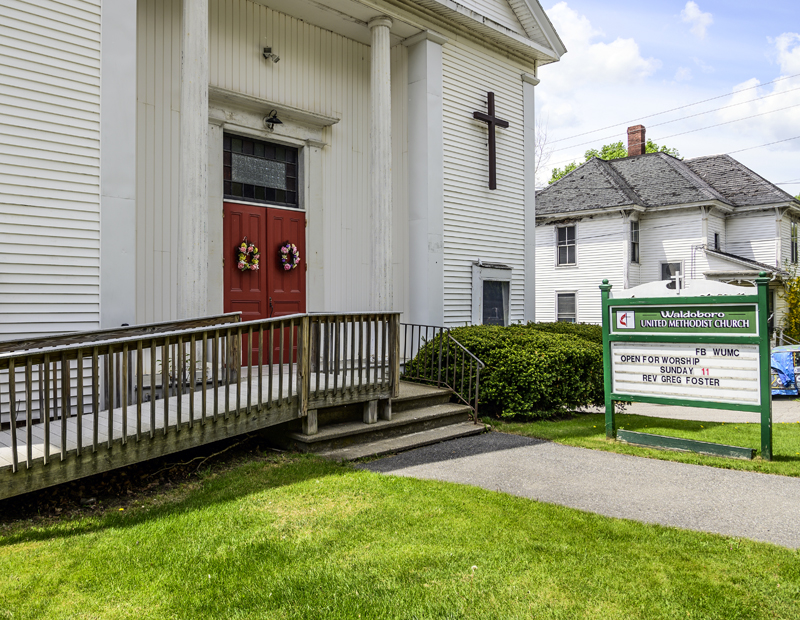 A ramp leads to the doors of the Waldoboro United Methodist Church on Tuesday, May 18. Sunday services will continue at 11 a.m. until the church closes for good June 30. (Bisi Cameron Yee photo)

The Waldoboro United Methodist Church, a fixture on Friendship Road since 1857, will close effective June 30.

The final service will be Sunday, June 27. Minister Greg Foster, who has led the church for the last three years, said it will be a gathering where people can share memories of the church community and how the church has been a blessing to them. “I look forward to that in a way,” he said.

Foster said the church has been an important place of worship for Waldoboro residents, including many leaders in the community, from town managers to school principals, fire chiefs, and state legislators.

He said the dwindling church population could not keep the church going. Many of the church’s core members are older and COVID-19 reduced attendance further. He said that having no young families with kids was a detriment to the congregation. 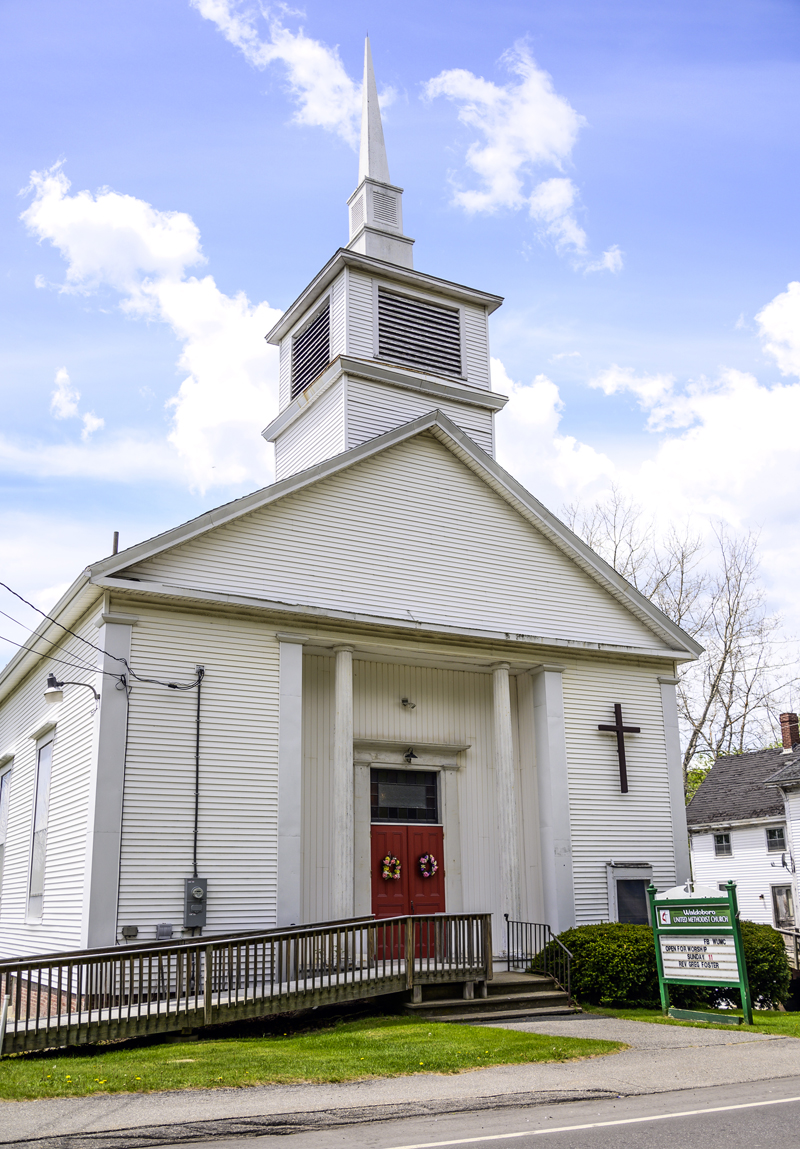 Blue skies frame the Waldoboro United Methodist Church on Tuesday, May 18. Built in 1857, the church has been a place of worship for residents and town leaders for 164 years. (Bisi Cameron Yee photo)

The church went remote for a while due to COVID-19, but when it went back to in-person services, only about five to 10 people were attending.

There is still work to be done in Waldoboro, according to Foster. “A lot of poor people in the community are not touched by any church — there’s a real need there,” he said.

“We look at it not as a building, not as a steeple — the church is the people and the community of God, and that will go on,” Foster said.

Congregants will shift to other churches in the area, and Foster will continue his ministry through social media and email until he finds another position.

According to Waldoborough Historical Society President Jean Lawrence, the roots of the church go back as far as 1793, when Methodist circuit rider Jessie Lee ministered to seven Christian communities, including one in Waldoboro. Group meetings were held mostly in private homes until the church was built in 1857 on a 67-foot-by-120-foot strip of land on Friendship Road.

Lawrence said the land cost $650 and the building cost an additional $4,000. Several members of the church mortgaged their farms in order to contribute to the building. Construction began on March 4, 1857 and was completed by Oct. 8 of the same year.

Lawrence said that over time, some of the smaller Methodist churches in the area began to close, and church records were consolidated at the Waldoboro church.

Rev. Charles Kinney was the first pastor appointed by the conference. Lawrence was a member during Kinney’s tenure. “He made that church grow,” she said.

According to Lawrence, in its heyday during the 1970s and 1980s, the church was well attended and had a 30-member choir. There were church sales and fellowship suppers in the large vestry.

“It was a part of the vibrant activities of the town,” Lawrence said. “It had wonderfully large Christmas Eve services. The church bell rang for the servicemen during World War I, for the end of wars. Graduations were held in the church.”

Children were always part of the congregation and the church had an active Sunday school until the mid-1980s.

Lawrence thinks societal changes contributed to the church’s decline and that there was not enough effort to attract new families. “Once you start losing your youngsters, it’s very hard to keep a church going,” she said.

“We went as a family to that church and made friends. It was a wonderful place for us to raise our boys. I hate to see it go. I really do,” Lawrence said.

Linda Pease, principal of Medomak Valley High School in Waldoboro, has attended the church since she was a child.

“I have witnessed the most beautiful people move through that church,” she said. “To have it close during COVID is even more poignant because it doesn’t give me a chance to say goodbye.”

Waldoboro United Methodist Church, at 85 Friendship Road, will continue to hold Sunday worship at 11 a.m. until it closes. For more information, call 832-5556 or email walumc@gmail.com.