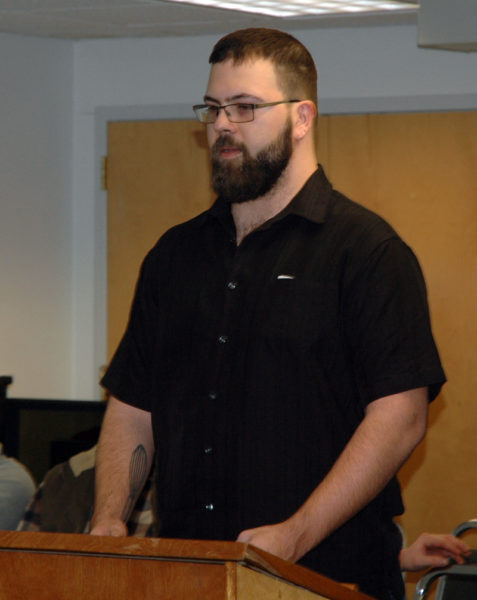 Noah Rosen speaks to the planning board during a site plan review regarding his caregiver storefront and high-end glass boutique at 21 Winslow Mills Road. (Alexander Violo photo)

The Waldoboro Planning Board voted unanimously to approve an application for a medical marijuana caregiver storefront and “high-end functional glass boutique” during a meeting the evening of Wednesday, Feb. 8.

The board’s decision followed public comments from several residents concerned about the facility, and a presentation from the applicant detailing the scope and purposes of the business.

The applicant, Noah Rosen, of Jefferson, is looking to repurpose a vacant building at 21 Winslow Mills Road (Route 32) as a boutique and medical marijuana caregiver storefront. The boutique will sell glass pipes.

Rosen has five years of experience in the industry. He started his business, Herban Cannoisseur, in 2012 while living in Warren.

Rosen said the business has thus far been a strictly mobile enterprise, in which he brought medical marijuana directly to patients.

He said his business operates under a different tax bracket and with a limit on its number of patients, who can possess up to 2.5 ounces of marijuana at a time.

Rosen first appeared before the planning board in January for a site plan review, but the board determined that it needed additional materials before voting on the application.

According to Waldoboro Planning and Development Director Emily Reinholt, the applicant provided those materials.

The property’s abutters have been notified of the applicant’s plans, and a letter from Waldoboro Police Chief Bill Labombarde indicated he does not oppose the business, noting that it is in the applicant’s best interest to follow all state guidelines in order to preserve his business, which has been in existence for several years.

Rosen said he is open to inspections at any time from the police department and applicable state agencies.

Running through a site plan review checklist, Waldoboro Planning Board Chair Seth Hall asked about parking, signage, and an apartment in the building.

Rosen said he plans to utilize an existing signpost. He said the signage would not be something characteristic of a back-alley head shop.

He said there are 10 parking spots on location and the apartment above the business would either be occupied by himself or would remain vacant.

One of the residents who expressed concern about the business was Dr. Marcia Smolin, a psychiatrist, who recommended that the board vote against the application.

Smolin said she feels the business will be too close to Miller School, the local public school for pre-kindergarten through grade six, and could affect the image of the town.

“I don’t think this is an image we want in Waldoboro. It’s just very concerning to me, the proximity to children. They are very vulnerable,” Smolin said.

“It’s way too close to the kids,” Winchenbach said.

Another concern focused on the fact that marijuana remains illegal under federal law, although Maine voters have approved it for both medical and recreational use.

Voters in Waldoboro narrowly voted against the legalization of recreational marijuana during the November election.

Reinholt said state law requires marijuana-related businesses to be 1,000 feet away from a school.

Planning board member Ted Wooster, a retired pharmacist, spoke of the need to further understand the chemical impacts of marijuana, while talking of the potential medical benefits.

“We need much deeper understanding of marijuana than in the past … it’s a potentially very valuable medical product,” Wooster said.

In response to concerns about the application, Wooster said alcohol and tobacco products are available at multiple locations in town.

“Tobacco and alcohol are highly addictive and highly available in many locations. We’ve learned to get along with both, maybe not always well, but we have,” Wooster said.

Hall said he appreciated the concerns raised by residents, but reminded those in attendance that the planning board must base its decision solely on ordinances and statutes.

“The site plan review is guided by existing land use ordinances and state statute. If it’s not found in regulations or ordinances, it’s not legal for us to consider,” Hall said.

Rosen said he wants to set a new standard for upscale glass boutiques, while also offering topical products, salves, and other forms of medical cannabis.

In response to concerns from the planning board, brought forth at the January meeting, about the storage of marijuana on site, Rosen said the building has a walk-in freezer that could be converted into a safe.

Rosen said he intends to employ a security company to ensure the safety and security of his business.

Rosen plans to lease the property from Zafiris Soldatos, of Rockport.

According to the planning board, the building has previously housed a gym, a restaurant, and a hair salon.