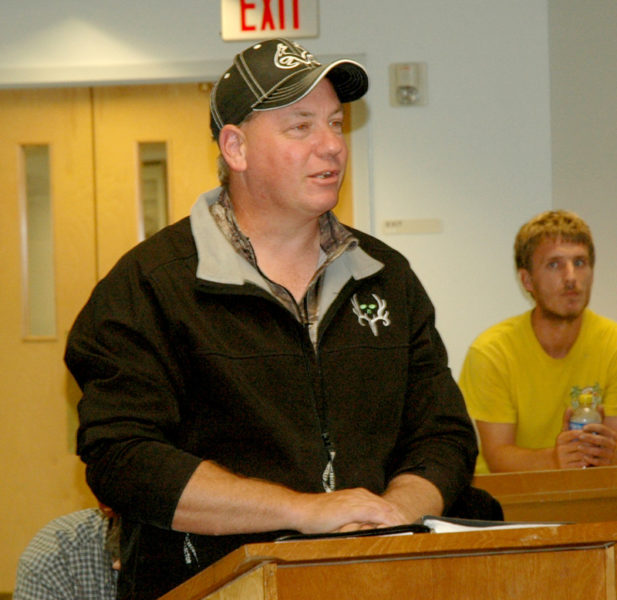 Abden Simmons, co-owner of A & A Shellfish Inc., discusses his plans for a multiple-use building at 19 Jefferson St. in Waldoboro. (Alexander Violo photo)

After a site plan review Wednesday, Oct. 11, the Waldoboro Planning Board unanimously approved an application from A & A Shellfish Inc. for the construction of a multiple-use building at 19 Jefferson St.

The Simmonses said the purpose of the project is to expand their business to incorporate clam shucking and processing. The business has been run out of the Simmonses’ home on Jefferson Street since 1996.

Abden Simmons said the building will be critical to the company’s growth and will help A & A Shellfish add value to its products and reduce shipping costs.

“We don’t have the room, but we have plenty of room next door and want to expand into the possibility of doing a shucked product,” Abden Simmons said.

Waldoboro architect Charles Campbell presented the application to the board.

Campbell said the property is in the town’s Route 1 commercial business district.

During the portion of the review set aside for public comment, a series of questions focused on odor and shucking byproducts.

Abden Simmons said the process will not create any more odor than the business’s current operation. The business will dispose of the shell byproducts at a property he owns in North Waldoboro.

Abden Simmons said the expansion would allow the business to hire three to four more people. He said the new building would not result in an increase in traffic. About 20-25 pickup trucks go to the business on a daily basis.

Abden Simmons said the property is on town water and Campbell provided the board with a letter from the utility district regarding the project.

Regarding public concerns about cleanliness at the site, Abden Simmons said the facility would be subject to Maine Department of Marine Resources regulations and inspections.

In August, Abden Simmons appeared before the Waldoboro Board of Appeals to request a variance to enable construction of a commercial building on Elm Street, but after a public hearing, he pulled the variance request and changed his plans, deciding to propose the building for Jefferson Street. He owns both properties.

Campbell said the parking area at the Jefferson Street property would be substantially bigger than the business’s existing parking area.

Ted Wooster, a planning board member, said the new parking format could clear up some of the current parking issues on Jefferson Street.