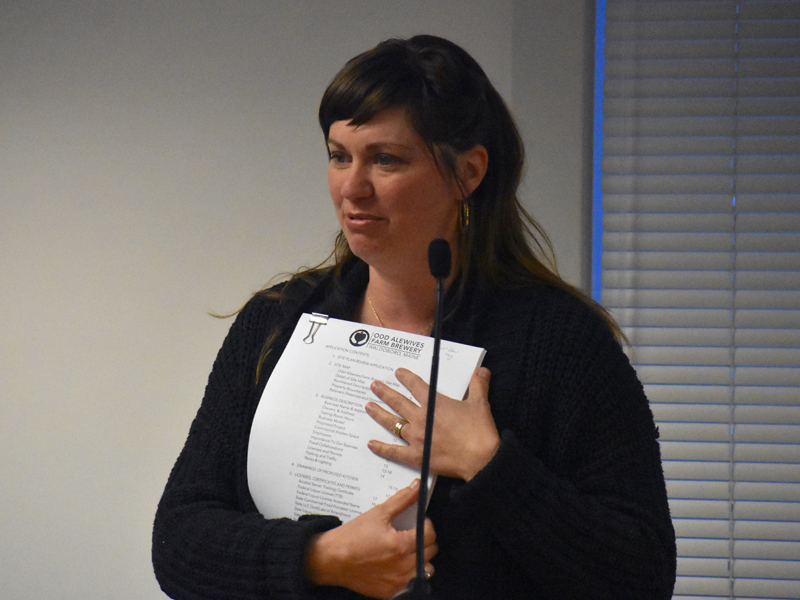 Sarah McNeil, of Odd Alewives Farm Brewery, presents the brewery’s plans to add a small commercial kitchen with a pizza oven to the Waldoboro Planning Board. (Alexander Violo photo)

The Waldoboro Planning Board approved plans for a takeout stand near the junction of Route 1 and Route 220 and the addition of a pizza oven at a local brewery Wednesday, March 13.

The first matter to come before the board was a change of use from retail to restaurant at 14 Washington Road.

Vickey and Ralph Jones plan to bring Ollie’s back to Lincoln County as a takeout stand at the former location of Burnham’s Bloomers, a florist shop.

The planning board unanimously approved the change of use.

Ollie’s Place operated in Jefferson at the current location of Lakeside Diner, 39 Washington Road, from 2010 until July 2014.

“I couldn’t find a place in Jefferson and we happened to be having dinner at Moody’s (Diner) and the waitress who owns the property offered it to us to rent,” Jones said in a phone interview in February.

Addressing the Planning Board, Jones said she and her husband often encounter customers who ask about their former business. The availability of the Waldoboro property facilitated the new venture.

Board member Tara Pelotte asked how the business plans to mitigate crowds, particularly customers looking for ice cream, during the busy summer months.

“We plan to be fast, keep turning people over,” Jones said.

Jones said that although board documents indicate 10 parking spots, if people park reasonably, 12 cars could fit in the parking lot.

Board member Barbara Boardman asked about points of entry and signage.

Jones said the business will have a sign made by Diane’s Signs and Services, of Gardiner. The entrance to the parking lot will be near the railroad tracks and the exit by a traffic island.

Board Chair Scott Simpson asked how power would reach the food stand.

Jones said there is a plug underneath a greenhouse on the property that can provide power to the takeout stand.

Board member Sara Hotchkiss expressed concern about safety at the nearby intersection. 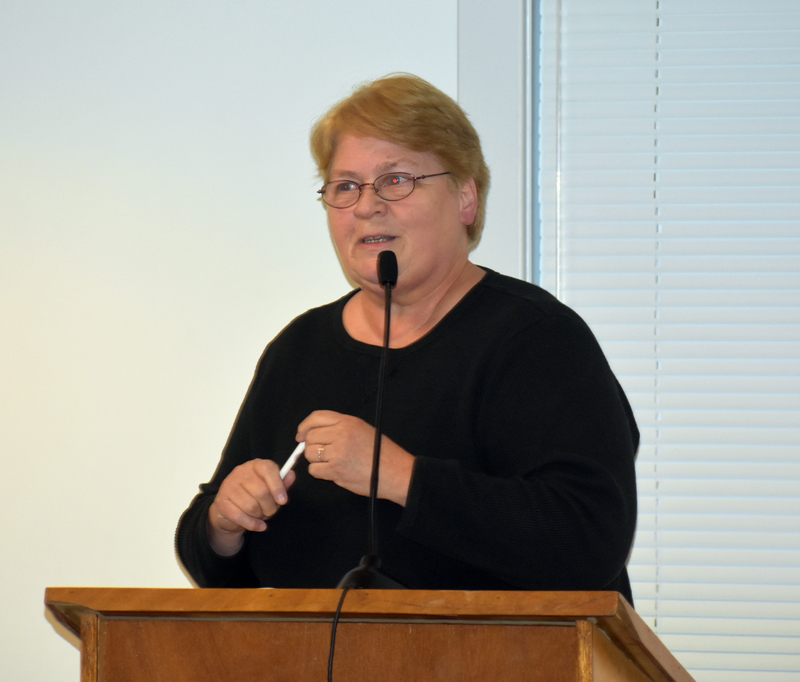 Vicky Jones talks to the Waldoboro Planning Board about her plans to open a takeout stand near the junction of Route 1 and Route 220. (Alexander Violo photo)

“I am not sure if the issues there have been resolved or not,” Hotchkiss said.

Max Johnstone, a planning consultant with the town, said traffic arrows have been added to the intersection’s traffic lights, but he could not say for sure if traffic issues there have been fully resolved.

Jones suggested repainting the traffic lines to avoid confusion at the intersection.

Jones said the decision to deliver was based on a perceived need in the area.

A letter of permission for the portable lunch wagon from property owner Dianne Burnham was included with board documents.

Sarah McNeil, who owns Odd Alewives Farm Brewery with her husband, John, was in front of the board to discuss adding a small commercial kitchen to the brewery at 99 Old Route 1.

The planning board unanimously approved the application.

According to McNeil, the brewery opened nine months ago and the property includes a small farm and house where the couple lives.

“We are looking to expand our operations by putting in a wood fire oven,” McNeil said.

The pizza would be available for sale Friday, Saturday, and Sunday, according to McNeil.

“We already do pizza night, where we purchase pizzas, and we want to sell our own and grow ingredients on our farm as well,” she said.

McNeil said the brewery does not plan to expand to accommodate the wood-fired oven.

“We’re planning on it to be small, for people who are having a beer in the tasting room to have something to snack on,” McNeil said.

According to McNeil, the brewery would continue its bring-your-own-food policy.

Boardman asked about the number of people the brewery could accommodate.

McNeil said the tasting room has 34 seats, in addition to five picnic tables out front during the warmer months.

Board member Ted Wooster asked about the total size of the property.

Hotchkiss asked if the pizza oven would require a firewall or exhaust system.

“The oven will have a pipe with a ceramic floor. It is heavily, heavily insulated and sealed. It is self-containing,” McNeil said.

Simpson asked about widening the entrance to the business’s driveway, saying board approval was not contingent on this, but it would be a good safety precaution. She asked if two cars could pass each other in the driveway.

“My only concern is people sitting on Old Route 1 waiting to get in,” Simpson said.

McNeil said a space near the entrance could be opened up to allow vehicles to pull to the side in the event of traffic leaving the driveway.

Simpson said the hill where the tasting room’s parking lot is located provides good lines of sight for traffic leaving the brewery.

“It’s at the apex of the hill. The sight lines in both directions are very good,” Simpson said.

Pelotte asked if serving pizza would produce an uptick in traffic at the brewery.

“If anything, I think it will stabilize business. With free pizza night, everyone comes at once. Now it will be from 3-8 p.m. on weekends,” McNeil said.