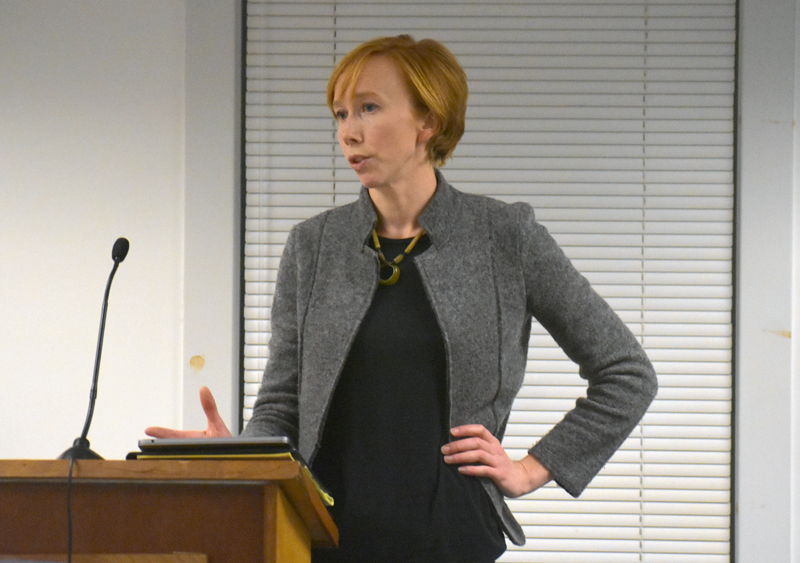 The Waldoboro Planning Board signed off on an entrepreneur’s plan to build a 27,000-square-foot facility for her eel aquaculture business at the Waldoboro Business Park on Wednesday, Jan. 9.

The board’s approval of a site plan review application for American Unagi LLC is contingent on the approval of permitting from the Maine Department of Environmental Protection for the business’s stormwater management and water discharge plans, according to board Chair Scott Simpson.

Sara Rademaker, president of American Unagi LLC, attended the meeting to explain her business and her plans for construction of the new facility at the business park.

“We are taking Maine-harvested glass eels and growing them out to market size using land-based aquaculture,” Rademaker said. She raises the eels without hormones or antibiotics and primarily sells them to restaurants.

The inner workings of the Waldoboro facility will be designed by a Dutch firm with experience designing similar facilities around the world, according to Rademaker.

The advantage of land-based aquaculture lies in the ability to control a variety of variables, according to Rademaker.

She said land-based aquaculture techniques have been employed throughout Europe since the 1980s.

Rademaker, who has recently raised eels at the Darling Marine Center in Walpole, said she got her start in the industry in 2014. She used her Thomaston basement to grow glass eels before spending time at a Waldoboro facility previously used for shad, then moving to Walpole, where she was able to demonstrate the commercial viability of her product.

“I grew eels at a small-scale commercial density, demonstrating the product could work in the U.S.,” Rademaker said.

Maine is one of only two states with a commercial harvest of elvers, along with South Carolina, according to Rademaker.

Rademaker said the elvers are often sent to China and imported back into the U.S. for use in the restaurant industry.

“We’re importing 5,000 metric tons and they come back worth five to seven times more than they are when they leave,” she said.

Her business “is a way to keep value in the U.S. and to grow a safer and higher-value product for consumers,” she said.

Rademaker said an attractive aspect of the business park is its proximity to the old town well, owned by business park owner George Seaver, allowing for a reliable supply of a large quantity of water.

“With the well and the high density of elver fishermen, looking for a place to locate this commercial eel facility, I found Waldoboro to be ideal,” Rademaker said. 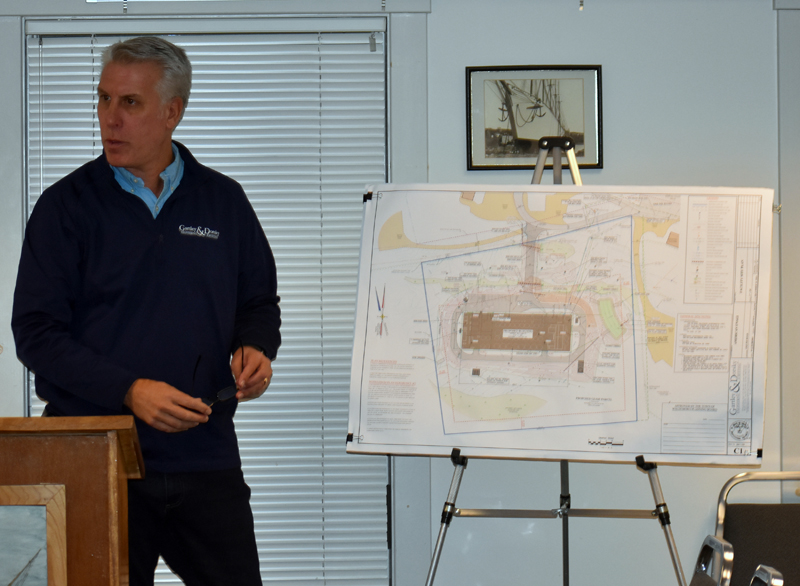 Rademaker said the new facility would employ seven to eight people. It will focus on the production of live eels, but will have a small area devoted to a processed product.

William Gartley, president of Gartley & Dorsky Engineering & Surveying Inc., said plans for stormwater management and water discharge have been submitted to the DEP.

Gartley said the facility will have 13 parking spots for employees and visitors.

According to Gartley, the proximity of the large well is critical for the facility.

“The well is a big item on this project. It has been used previously and provides us with more water than we need,” he said.

Gartley discussed plans for the safe discharge of water from the facility to the Medomak River, saying the water will travel to the river via an existing pipe under Route 32 after an extensive treatment process.

Board member Ted Wooster asked how much water would be discharged into the river.

According to Rademaker, the facility will discharge 95,000 gallons of water per day.

Rademaker spoke in detail on the water treatment process, saying water will be sterilized with ultraviolet sterilizers before leaving the facility, while going through secondary and tertiary treatment steps.

Board member Barbara Boardman asked what types of water testing will be done at the facility to ensure the health of the river.

“How does the town know the water going into the river is in good shape?” Boardman said.

Rademaker said the operation is contingent on DEP permitting and associated testing.

“Within the system, water quality is a huge part of our day-to-day operations,” she said.

Gartley said the facility will have to report information on water quality to the state.

“They are required to report water quality to the DEP and the DEP has right to inspect at any time,” Gartley said.

Board member Sara Hotchkiss asked how the facility would cope with a large number of eels getting sick or dying.

Rademaker said that in the past four to five years, she has not had a serious problem.

“With a land-based system, maintenance and health of the organisms is key to the business’s success,” Rademaker said.

The park is currently home to other aquaculture enterprises, including Acadia Harvest Inc., which raises soldier flies for aquaculture feed, and Ocean Organics Corp., which produces marine-based natural and organic fertilizer.

The business park is in the town’s industrial zone, according to Max Johnstone, a planning consultant with the town.