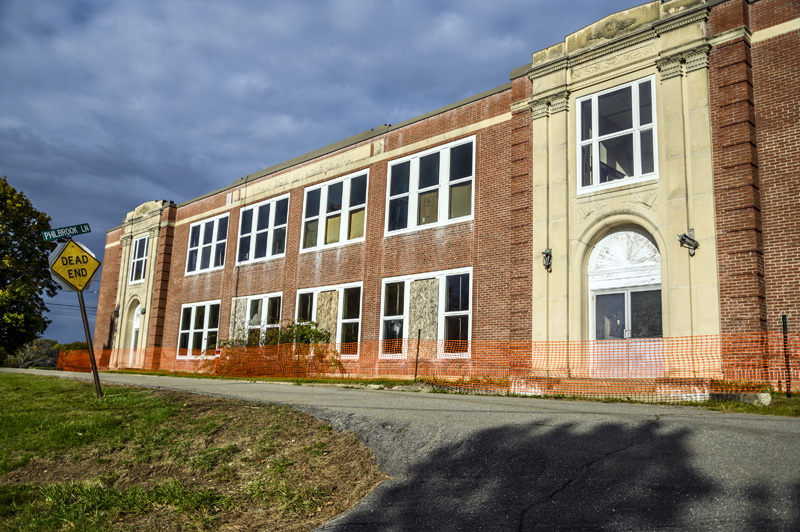 A temporary fence surrounds the A.D. Gray School in Waldoboro on Oct. 18. An engineering report determined that the brick facade is not attached to the front of the building and there is a risk that bricks could fall. (Bisi Cameron Yee photo)

“I think you have to go to a vote,” said Town Manager Julie Keizer regarding the once again unresolved fate of Waldoboro’s A.D. Gray School.

Based on an engineering report, representatives from Volunteers of America on hand at the selectmen’s meeting on Tuesday, Oct. 12, said they could not preserve the building despite their best intentions.

The previous vote on the June 2021 ballot in which senior housing won out over a planned park, was informed by residents’ desire to save the historic building.

The engineering report found issues with the building’s facade and interior structure that made the original plan to remodel the building not cost effective.

Sites was disappointed by the report.

He said, “I think what was close to our heart is we really looked at this as preserving a historical building which brings a  lot of emotion and feeling to the project… If we have to dismantle the building and put in something new does it make the site as special?”

Volunteers of America remains dedicated to Waldoboro and wants to do a project in the town. “We hope it’s on this site, but if not, let’s continue talking and figure it out,” Sites said.

“The ballgame has changed now, of course,” said Selectman Bob Butler.  The town might be forced to send out a new request for proposal regarding the A.D. Gray building.

“In that new competitive scenario, are you still interested?” Butler asked Sites. 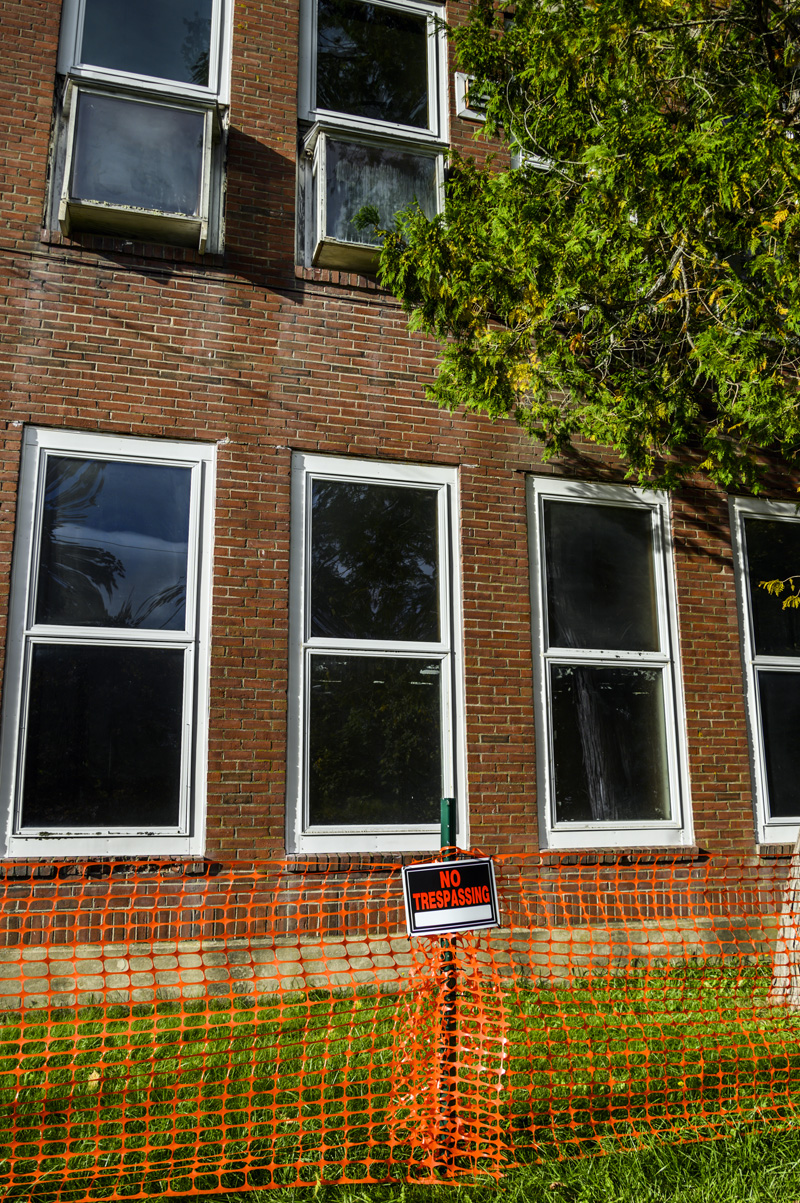 A no trespassing sign is posted on a temporary fence enclosing the A.D. Gray School in Waldoboro on Oct. 18. Structural issues may eventually require the historical building to be torn down. (Bisi Cameron Yee photo)

Sites said he had not thought through that scenario.

Freeman Zausner, a resident of Waldoboro said the engineering report and the report on historic preservation “seem to have made this project not really doable,” but letters in The Lincoln County News in favor of the senior housing project demonstrated “tremendous emotional attachment” to the school.

That attachment was a decisive issue in both the non binding vote and in the proposed park vote.

“This changes the concept of the development of the site substantially,” he said, regarding the possibility of tearing down the building.

He asked VOA to consider an alternate location in Waldoboro. “We certainly have a great need for senior housing, and VOA is certainly the right (organization) to do it… You’re the right people.”

Selectman Jann Minzy asked Sites and Foster how a new building might be reminiscent of the original building, and what parts of the building could be reused.

Foster said there is no reason VOA can’t try to mimic the scale of the original building and introduce architectural features in the design that would meet the town’s approval.

Butler said he is in favor of finding an alternative spot for senior housing to “maximize the economics we could realize from the current site.”

Regarding VOA, he said “I don’t want to lose them as partners, I really don’t.”

Minzy said she thinks the A.D. Gray site is the best property for senior housing in Waldoboro because residents could walk to the downtown area.

“I’m very disappointed we can’t do that with that building,” she said. “We need to see what plan B or C would be. I don’t think I know what the people would think. I think they need to let us know.”

The fate of the A.D. Gray building will have to go to a vote and that waiting until June makes the most sense to avoid accusations that the timing of a special election might favor a particular group, Keizer said.

“I think you have to wait til June… I know nobody wants to hear that,” she said.

Butler was in favor of proceeding with a request for proposals to get options on the table for voters to consider. He said the town should use the same parameters and standards they developed in the memorandum of understanding with VOA.

Butler said any proposal should include a performance bond, a completion bond, and proof of financial capacity.

“I think those three elements are critical for sorting out the wheat from the chaff,” he said.

Waldoboro’s Public Works Department boarded up several broken windows in the A.D. Gray building, and placed a temporary fence around the perimeter in response to safety concerns caused by the unsecured façade, Keiser said.