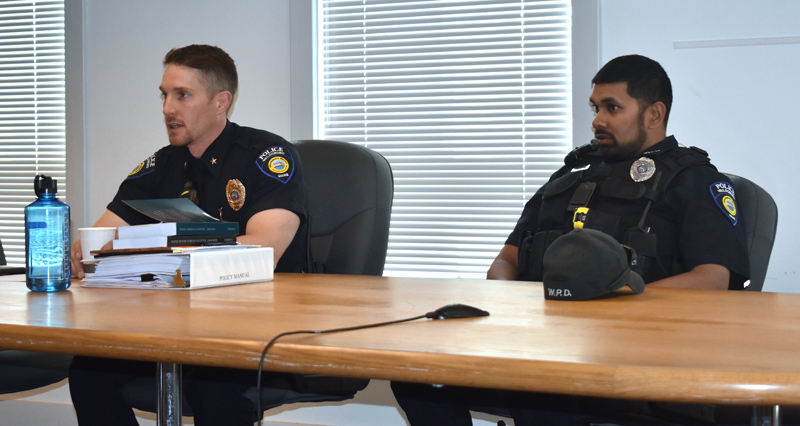 Waldoboro’s police chief and two officers fielded questions on drugs, littering, and speeding during question-and-answer sessions at the municipal building May 22.

The public forums, at 10 a.m. and 6 p.m., gave residents an opportunity to discuss community policing and raise concerns.

Lash, who took over the job as police chief in November 2018, has emphasized the importance of community policing, including the potential for public education as a means of positive interaction between law enforcement and the public.

The U.S. Department of Justice defines community policing, in part, as a philosophy “to proactively address the immediate conditions that give rise to public safety issues such as crime, social disorder, and fear of crime.”

Prior to the forum, Lash said that after six months as police chief, he wanted to update residents on department activities and hear from them about what they want to see.

One concern raised at the evening forum was about speeding, specifically in the village, near the intersection of Main Street and Route 220.

Caren Clark, of the Waldoboro Business Association, said she is concerned about speeding, motorcycle noise, and traffic noise in the village.

“I think the speeding issue is something that concerns me … I would love to see some plan or strategic thought put into it,” Clark said.

“It’s scary to see all the people walking, trying to cross the road,” Clark said.

Lash said traffic enforcement is a critical task for the department, but explained that Waldoboro’s size presents a challenge.

“We have 100-plus miles of roads and we can’t be everywhere at once,” he said.

However, Lash said the 2019-2020 municipal budget would add another officer.

“I view it as a swing shift, focusing on traffic, while the other officer takes service calls,” Lash said.

“Depending on the curvature of the road, a vehicle can appear faster. Size also is a factor. Bigger vehicles look a lot faster than they are,” Jack said.

Public inquiries were also made about fines for littering.

According to Jack, littering fines are set by the courts and the amount varies in relation to where the littering occurred.

Lash said he believes the police department cannot solve addiction issues on its own.

“I don’t believe we can solve the addiction issue. It’s a community issue. It’s a sickness. These drugs are very powerful,” Lash said.

According to Lash, new marijuana laws have impacted searches of motor vehicles that often led to the discovery and seizure of drugs in the past.

“For trafficking, prior to the new marijuana laws, we could search any vehicle if marijuana could be detected. A lot of other busts came from these vehicle searches, but the scope has narrowed,” Lash said.

Lash and Jack discussed social media issues the department deals with on a daily basis.

According to Jack, Snapchat is equally popular for these activities. The platform has no age requirement and messages disappear after viewing unless the recipient takes a screenshot, at which point the person who sent the message is notified.

Jack, the department’s D.A.R.E. officer, said he talks to students about how to use social media when he is in the classroom.

Hills urged residents to call 911 in lieu of the department’s Facebook page if they observe a crime or are attempting to report an emergency.