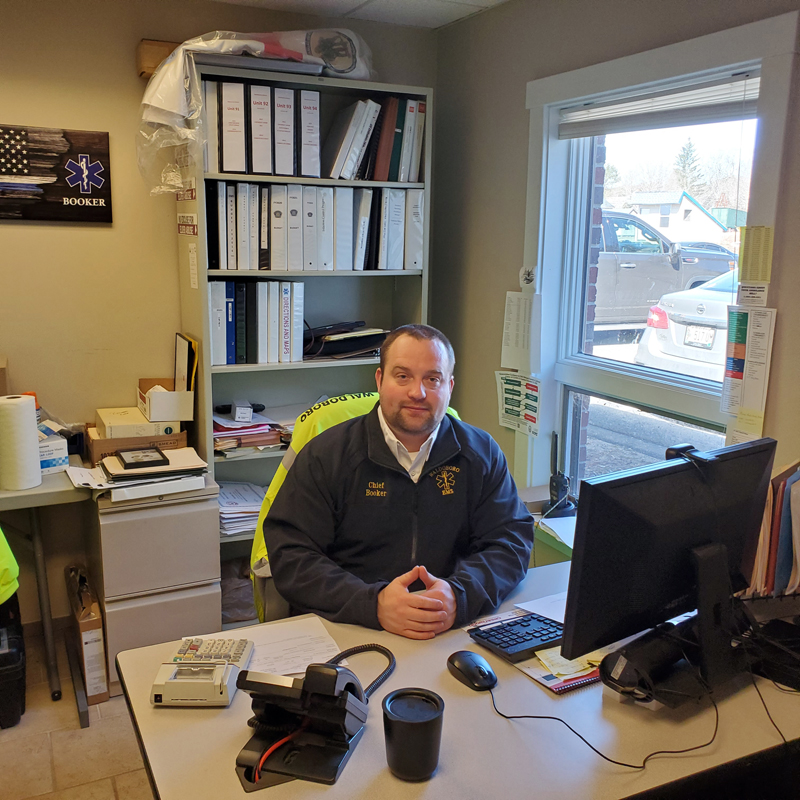 Booker was the town’s assistant EMS assistant director, and has been serving Lincoln County since 2009.

He started ambulance ride-alongs with his uncle in Jefferson at the age of seven and has been in love with the profession ever since.

“You get to work with some of the best in the field. Best part of this job is learning something new every day,” said Booker.

Booker will replace Director Richard Lash. Despite the title change, Booker will have the same responsibilities and duties as chief.

The first order of business for Booker will be to address staffing shortages former EMS Director Lash mentioned during a selectmen’s meeting last August, according to previous Lincoln County news reports. At the time, Lash said Waldoboro EMS had three full-time staff members and was looking to have a total of 10.

“Right now we just had wage increases and benefits that are attracting more workers” Booker said. “We have four full-time employees and are still looking to grow to 10.”

“While we absolutely do not have a full schedule, we are seeing less burnout and fatigue among our staff,” said Booker.

“The mandate took it out of our hands. Regardless of my or anyone’s personal belief, the line has been drawn,” said Booker.

But he added, “I have not seen someone’s personal decision to not get vaccinated impact their ability to provide the quality care we expect,” said Booker.

In the past, Booker spoke to The Lincoln County News about the stigma surrounding mental health issues in the medical field and simply acknowledging them can be seen as a sign of “weakness.” Now as EMS chief, he is in a position to change that.

“Burnout is a real issue in the EMS profession. Pay increases have helped. The first way to solve a problem is to recognize it. I have an open door policy that allows staff to come to me. Talking about these issues among each other and with professionals is the first step,” said Booker.

“I don’t know if it can be taught in a classroom setting,” said Booker of school training on mental health.

Booker received his paramedic training at the United Ambulance Training Center in Lewiston from 2019-2020.

Booker hopes to educate the public on the cost of providing EMS services and exactly what the community is getting for it.

“There is a silent agreement that when you call 9-1-1 the person coming will provide the best quality of care to you and that care comes at a cost,” said Booker.

“As we hire more staff we will see less overtime which will help offset the cost of wage increases and more staff,” he added.

Waldoboro Town Manager Julie Keizer said, “With Booker, you know what you are getting. He is a man committed to the EMS service. Ask anyone that has been in is care.”

Booker will be officially sworn in at the Waldoboro Select Board meeting at 6 p.m. Tuesday, April 12, at the town office.