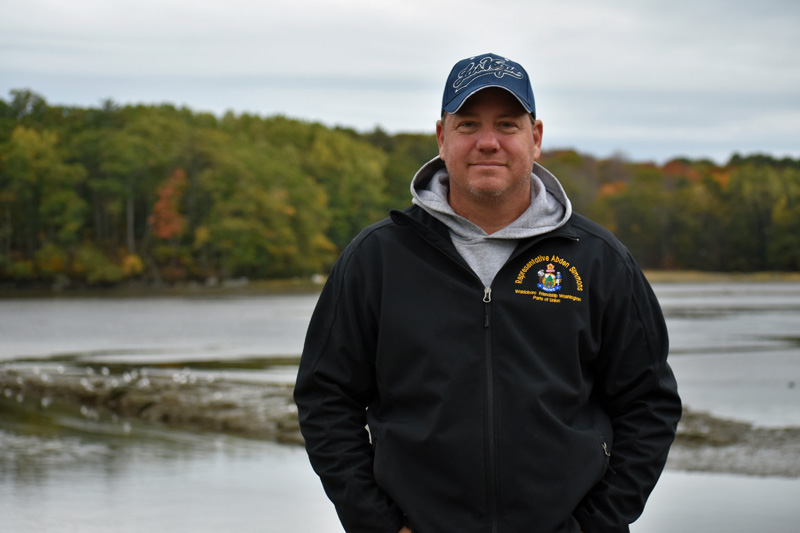 A Waldoboro businessman, selectman, and shellfish harvester is running for a second term as representative of House District 91: Friendship, part of Union, Waldoboro, and Washington.

State Rep. Abden Simmons, R-Waldoboro, is a lifelong resident of Waldoboro. He is serving his second term on the Waldoboro Board of Selectmen and seeking a return to Augusta because he believes he still has work to do on the Marine Resources Committee.

Simmons said he feels strongly that he needs to work to resist regulations that harm the livelihoods of commercial fishermen.

“I feel as though I need to be up there in Augusta to do that. It’s not an easy business to be in and to be unnecessarily hampered by regulations is very frustrating,” Simmons said.

Simmons chairs the Waldoboro Shellfish Committee and sat on the Waldoboro Planning Board for six years. He graduated from Medomak Valley High School in 1989.

After high school, he spent his summers on the mudflats of the Medomak River, harvesting clams by depuration digging, and his winters cutting wood.

Simmons said he started digging clams more and more and started harvesting elvers during the spring months, in the years before the license lottery.

Simmons has harvested shellfish for a living for the last 27 years and has operated a buying station for clams, A & A Shellfish Inc., since 1996.

Simmons is the executive director of the state association for elver fishermen and has sat on the state’s shellfish advisory council and the governor’s task force on invasive European green crabs.

Simmons and his wife and business partner, April, have one son, Dalton, a former Marine who now works in cybersecurity for Dead River Co., a fuel company.

Simmons has chaired the Waldoboro Shellfish Committee for nearly 20 years. His work on the shellfish committee led to his attending public hearings and workshops in Augusta as far back as 2008, sparking his interest in entering state politics.

Some of Simmons’ proudest accomplishments have come from his work with the Medomak River Task Force and the shellfish committee.

“I’m proud to be on a committee that brings in $2 million annually. The river is this town’s largest employer,” Simmons said.

Simmons said the task force has helped to open 400 acres of the Medomak flats to shellfish harvesting over the last five years, and the techniques employed in Waldoboro to eliminate pollution are now being used in other parts of Maine.

Simmons said the Medomak harvesters land more clams than those in any other area in Maine, and unlike those in some other towns, the Waldoboro Shellfish Committee is completely funded by license fees.

There are 172 shellfish licenses in Waldoboro, according to Simmons.

Simmons said Waldoboro is not the only town in House District 91 reliant upon commercial fishing. Friendship boasts the third-highest lobster landings in the state.

According to Simmons, there are 650 commercial fishing license holders in Friendship and Waldoboro.

Simmons said that as a selectman, he has worked with the neighboring town of Washington to help restore alewife harvesting on the Medomak.

“We used to harvest alewives here and I would like to see that happen again,” he said.

Simmons expressed concern about offshore wind development around Monhegan Island due to its potential impact on commercial fishermen.

Simmons said the cables associated with the turbines could have a negative impact on fish migration and cause lobstermen to avoid setting their traps around the lines for fear of getting gear tangled or losing traps.

In addition to fishing, Simmons said he wants to see more vocational job opportunities. He proposed keeping the Mid-Coast School of Technology in Rockland open throughout the year.

“It is a $25 million investment. Why can’t we have it open all summer? That would give taxpayers a bang for their buck,” Simmons said.

Simmons said that in order to keep high school graduates in Maine, there needs to be training for the jobs available here, not preparation for jobs offered out of state.

“If you want kids to stay in Maine, you have got to start training them for the jobs Maine needs,” Simmons said.

He said it is important for area students to know they don’t have to go to college and can pursue other training to make a living in the area.

On the topic of the ongoing opioid crisis, Simmons said he supports treatment centers in combination with some form of job training to help people make a living after treatment.

“If you really want to be successful, you need to teach them a trade so they can avoid falling in the same rut,” Simmons said. He said he believes people want to get better and want to get treatment and that a plan for after treatment is critical to any program’s success.

The recent and ongoing increases in the state’s minimum wage is an area where Simmons feels changes could be beneficial. He said a training wage could be a good way to increase pay without hurting small businesses.

“Businesses can’t afford to pay someone who is only producing $8 worth of product $12 per hour. It doesn’t work. You need to start with a training wage. It’s a fine margin for a small business, and losing $4 per hour is a hit,” Simmons said.

Simmons said he believes the citizen’s initiative process should include a requirement to hold public hearings on potential ballot questions.

“It should go to a public hearing before it goes on to a public referendum so the wording does not misrepresent what people are voting for,” Simmons said.