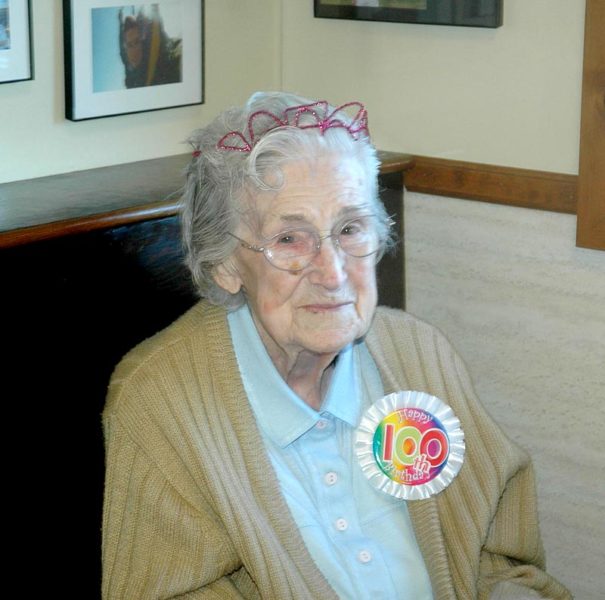 Lifelong Waldoboro resident Martha Boggs celebrated her 100th birthday by going out to breakfast with friends at Moody’s Diner the morning of Monday, Sept. 12.

Boggs said a lot has changed in town since she was younger, especially after the work on Route 1 was completed.

On Monday she was looking forward to enjoying a breakfast of pancakes, maple syrup, and bacon – the latter she insisted on including with the meal.

Boggs’ booth was decorated for the occasion. As Boggs’ contingent was waiting for breakfast, a couple came by to wish her a happy birthday and sang an impromptu version of “Happy Birthday” for her.

Boggs held several different jobs during her time working in Waldoboro, at Moody’s Diner, a local bank, an insurance agency, and at A.D. Gray School.

She reflected on her time at Moody’s, where she worked in the early years when the establishment’s founders, Percy and Bertha Moody, were around, and at the time when Route 1 was re-routed to its present course through Waldoboro in the 1930s.

“There was just one place you could sit at by the counter then,” Boggs said.

Jessica Kozlowski, a friend of Boggs’ who was in attendance at the birthday breakfast, commented on the different ages of patrons at the Waldoboro diner.

“You could see a 2-year-old or a 100-year-old celebrating their birthday,” Kozlowski said.

Kozlowski said at the end of breakfast a piece of cake was brought out for Boggs to enjoy.

“The whole staff of the restaurant came out and sang,” Kozlowski said.