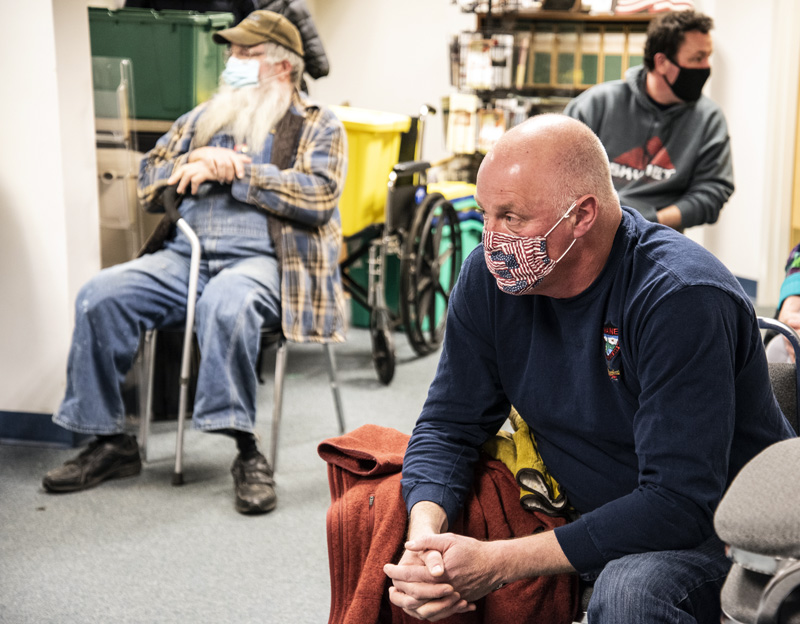 Members of the Waldoboro Board of Selectmen defended plans to transfer the A.D. Gray property to Volunteers of America on Tuesday, Feb. 23.

During the meeting, Surran Pyne, spokesperson for the A.D. Gray Park Coalition, urged the board to cease all negotiations with Volunteers of America immediately in favor of the coalition’s plan to turn the property into a park. “We are offering a different path,” Pyne said.

Pyne wants to see the property benefit the whole community with space for concerts, a farmers market, sports, and other gatherings. “This park is not a Band-Aid,” she said. “This park is transformative.”

Pyne said suggestions have been made to combine senior housing with a park, but the coalition does not consider that a viable plan.

According to Pyne, the coalition estimates that it will cost $300,000 to raze the building, remove the obsolete tennis courts, fill the foundation with dirt and loam, seed the property, and restore a wetland and buffer. The group has received pledges for half that amount.

Additional amenities would be chosen and managed by the town.

Selectman Bob Butler asked about the timing of the park proposal, after the referendum and years of deliberations about the property.

“Does it really matter?” Pyne said.

Butler said it did matter to him. “We’ve been in good faith discussions with a quality organization. It’s a perfectly good building. It would be a shame to tear it down,” he said.

Butler said he has received emails from 10 or 11 people and several calls, but no groundswell of support for the park idea.

“We do have momentum,” Pyne said, pointing to the amount raised.

Butler asked if the donors live in Waldoboro.

“I am not at liberty to identify the donors, but that they are residents and nonresidents, all with money pledged to support the park,” Pyne said.

Selectman Jann Minzy said the town “has a lot of green space.”

“What other areas have you looked at?” Minzy said.

Pyne said she had not researched other locations for an in-town park.

Abden Simmons, chair of the board of selectmen, said there are 20 unused acres across from the Friendship Street School.

He said the town’s negotiations with Volunteers of America include “some discussion” of the nonprofit paying property taxes or making a payment in lieu of taxes. “That’s way better than it being a drain on the treasury,” he said. 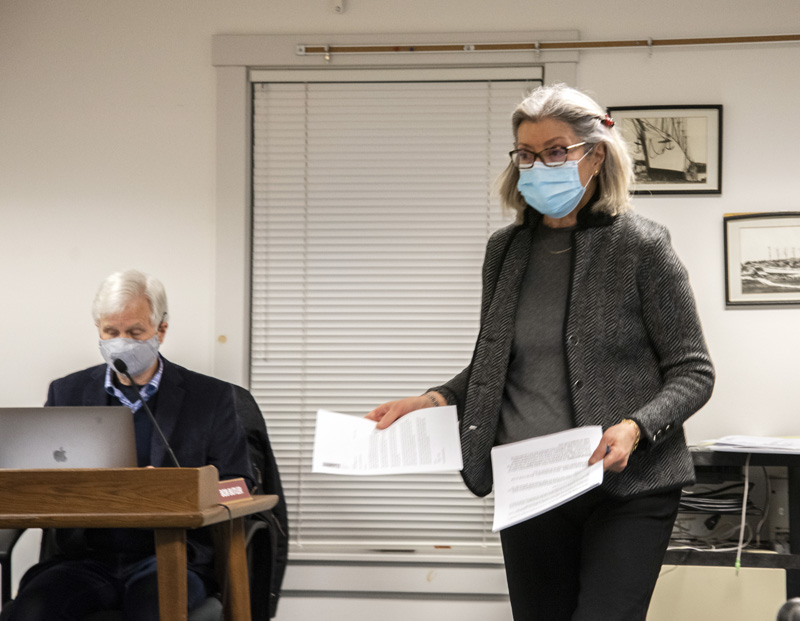 Surran Pyne, representative of the A.D. Gray Park Coalition, passes out information on the coalition’s proposal during a selectmen’s meeting in Waldoboro on Tuesday, Feb. 23. (Bisi Cameron Yee photo)

While Butler is not in favor of revisiting the Nov. 3, 2020 vote, Pyne and Butler found common ground in a discussion of the wording for a ballot question if the issue does go before voters again. They agreed that detailed proposals for both the park plan and the Volunteers of America plan should be presented. Butler said that the combined plan should be a third option.

Pyne then asked Butler if the board intended to go back to the voters on the issue, but Butler said “the nonbinding vote spoke volumes to me.”

Ben Vail, the last principal of A.D. Gray School and an abutter and member of the town’s A.D. Gray committee, said he supports the Volunteers of America proposal for three reasons: he believes money would probably come back to the town, he believes the project would provide homes for people in need, and he believes the board should “uphold the will of the people.”

“They had a choice between this or anything else. And they chose this,” Vail said.

Resident Chris Jones asked what harm there would be in gathering more feedback from the public.

“What’s in it for the entire town, besides a quick fix to get rid of the building?” Jones said. “Why not let it go to the voters?”

Daniel Martone, owner of Broad Bay Cafe and an abutter, moved to Waldoboro a year ago. Martone said he would like to see Volunteers of America guarantee that Waldoboro residents would live in the building.

Reuben Mahar, a resident, asked how many members the A.D. Gray Park Coalition has.

Pyne said she had not taken a count.

Mahar asked if state Sen. Chloe Maxmin still supports the project. Pyne had said Maxmin supported the project at a previous meeting, but a legislative staffer told The Lincoln County News that Maxmin was reviewing the project.

Pyne said that Maxmin “has asked us to not use her name.”

Minzy said the residents of the housing units would contribute to the community.

“Senior citizens benefit the town — they’re members of the board, of the garden club. They’re volunteers. Many of the volunteers in Waldoboro are people of that age. If they don’t have money, they give their time,” Minzy said.

Simmons said he was “worked up.”

“I’m a lifelong resident and to sit here and listen to this crap that we don’t need senior housing, sending our older residents who can’t afford taxes away instead of letting them live here, sending them elsewhere is wrong,” Simmons said. “People who move here from away don’t think we need the people of Waldoboro.”

Waldoboro Recreation Committee Chair Troy Smith said, “If you take out the anger in the room, both projects are positives. One just came before the other. It’s a tough choice.”

Keizer said the majority of calls she receives reflect Simmons’ point of view.

“It’s hurtful. People feel like they’re not wanted, not valued. It’s been the most heart-wrenching thing,” she said. “These are our own people. To be a prosperous community, we have to have a serious conversation about poverty. It’s a tough perception to get over when people feel marginalized.”