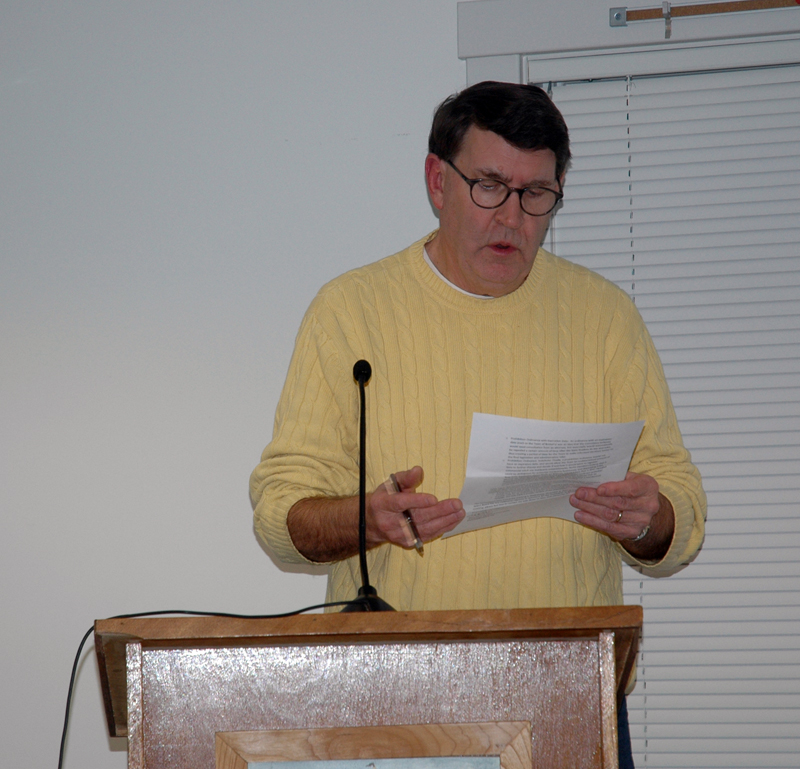 Waldoboro Marijuana Committee Vice Chair Andrew Zulieve reads the committee’s recommendation to adopt a prohibition on retail marijuana to the Waldoboro Board of Selectmen on Tuesday, Nov. 28. (Alexander Violo photo)

The Waldoboro Board of Selectmen will pursue a moratorium on recreational-marijuana businesses rather than an indefinite ban, contrary to the Waldoboro Marijuana Committee’s recommendation.

The board made the decision during its meeting Tuesday, Nov. 28.

The selectmen will further discuss a moratorium during a workshop prior to their next meeting, Dec. 12.

The workshop to finalize the moratorium will take place at 5 p.m. The matter will then proceed to a special town meeting at a later date, when residents will vote on whether to enact a moratorium.

Selectman Jann Minzy said she preferred a moratorium to an indefinite ban, because the latter would indicate that the town was done wrangling over the issue.

“When I hear moratorium, I hear a continued discussion,” Minzy said.

Minzy said a moratorium will give the town more time to discuss the matter.

“I’m all in favor of a moratorium. A prohibition says it’s prohibited and a moratorium says we are still thinking about it and not going to do anything now until we know more. That’s my feeling,” Minzy said.

Selectman Robert Butler also voiced support for a moratorium, saying it will give those in town who support retail marijuana a chance to contribute to the dialogue and will give the town an opportunity to further discuss the matter.

“I’m leaning toward a moratorium. I feel a prohibition infringes on the rights of people in the minority in this town. A moratorium would encourage discussion, give the minority an opportunity to make their views known,” Butler said.

“A prohibition shuts it right off without any discussion,” Simmons said.

Selectman Katherine Winchenbach said she would support a moratorium and wants to ensure the town has something in place to regulate retail marijuana.

“We do need to protect ourselves as a town, but need more time to research this,” Winchenbach said.

Waldoboro Marijuana Committee Vice Chair Andrew Zulieve presented a report from the committee to the selectmen. In the report, the committee recommended the adoption of an ordinance to prohibit recreational-marijuana businesses, such as retail shops, social clubs, and cultivation, manufacturing, and testing facilities.

Zulieve said the vote in favor of prohibition was four in favor, two opposed, and two abstaining.

The committee initially voted on recommending a moratorium, but the motion failed with three votes for, four against, and one abstention.

“With a prohibition, you don’t have to come back, as you do with a moratorium, to keep renewing it,” Zulieve said.

Butler said that while most moratoriums last 180 days, with the option for the selectmen to extend the length an additional 180 days, it is his understanding that this moratorium could stay in place as long as necessary if there is no action from the state on retail marijuana.

“As long as the conditions of the moratorium persist, it can extend as long as it is needed,” Butler said.

At the conclusion of the meeting, the board voted to accept a harassment and dating policy.

Keizer said there are a few more hoops to jump through with the department, but the process is proceeding smoothly.

“We are moving ahead and it should be completed by year’s end and we should save the town some money. It seems to be on target,” Keizer said.