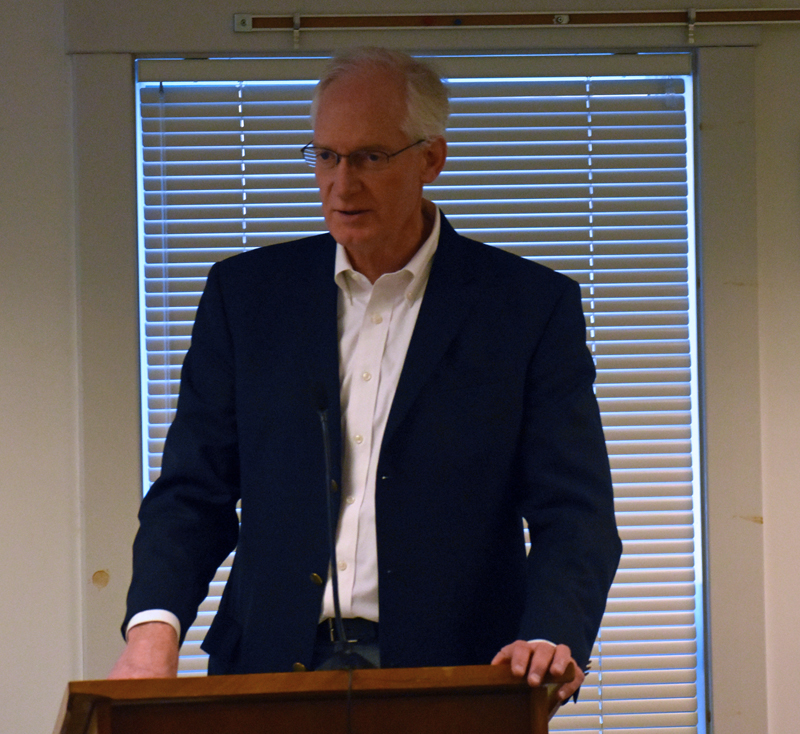 Maine Water Co. President Rick Knowlton addresses the Waldoboro Board of Selectmen during a meeting at the municipal building Tuesday, March 12. The selectmen agreed to discuss the sale of its water utility to the company. (Alexander Violo photo)

The Waldoboro Board of Selectmen has voted unanimously to start the process necessary to increase water rates and to sit down with the Maine Water Co. to discuss the sale of the town’s water utility.

The president of Maine Water Co., the contractor that runs the Waldoboro Water Department, attended the selectmen’s meeting Tuesday, March 12.

Robert Butler, chair of the board of selectmen, said he is in favor of starting both processes, regardless of what the town ultimately decides to do with the water department.

“My feeling is we are delaying the inevitable. Whether we sell it or not, there will be an increase in water rates. We have done nothing for over 13 years. The facts are the facts. You can’t operate with negative cash,” Butler said.

Selectman Abden Simmons said he is in favor of spreading the rate increase out over the course of a few years.

“Nothing has been done going on 14 years now. It drives me crazy no one paid attention to it,” Simmons said.

Rick Knowlton, president of Maine Water Co., said the company is willing to work with the town on the rate increase.

“It’s an option. The rate increase is not for operation, it is for what we need to fix or replace. We helped you get here, we can help you get out as long as we are in agreement on the facts of what you want to do,” Knowlton said.

Town Manager Julie Keizer recommended setting up a subcommittee of the board of selectmen to work with the water company moving forward.

“I like the idea of a subcommittee. If we need help, we can get it in terms of a rate increase, in massaging the numbers to get to the point where we are comfortable we aren’t hitting people over the head,” Butler said.

In addition to the subcommittee, Knowlton said the water company is open to working with the town attorney and auditor.

The board voted unanimously to have Butler and Simmons make up the membership of the new subcommittee.

Knowlton said utility revenue from current rates is inadequate and Waldoboro has not raised water rates since 2005.

According to documents from the Waldoboro Water Department, the closure of the Sylvania manufacturing plant and water conservation efforts have reduced the utility’s total revenue by $40,000, while loan payments have increased by $33,000 and operating expenses have remained flat.

Additionally, Knowlton said a projected cash shortfall of $200,000 over the next five years is anticipated with minimum levels of capital spending, indicating Drinking Water State Revolving Fund money through the U.S. Environmental Protection Agency is available if an unanticipated major project comes up.

With these projections in mind, Knowlton recommended increasing water rates in 2019 to recover $40,000 in base revenue, a move that would change the average customer’s bill from $68.52 per quarter to $80.51 per quarter, or $1 per week for 100 gallons per day.

The town’s public fire protection charge would go from $80,160 annually to $94,200 annually, according to water department documents.

The town’s public fire protection charge would go from $94,200 annually to $105,200 annually, according to department documents.

Even with those rate increases, the town’s quarterly base rates would still be well below rates in neighboring water districts, including the Great Salt Bay Sanitary District in Damariscotta and Maine Water Co.’s Camden and Rockland division, according to Knowlton.

This discussion was followed by a conversation on the sale of the utility.

According to Knowlton, Maine Water Co. would purchase Waldoboro’s water system assets for $1.3 million to $1.5 million with the intent of integrating Waldoboro into its Camden and Rockland division, which covers several Midcoast towns. The sale would allow the company to provide consolidated rates and service to Waldoboro residents as part of the company’s Midcoast service area.

Knowlton said the sale would eliminate the Waldoboro Water Department’s outstanding debt, approximately $1.2 million, and would provide the town with the added benefit of receiving $50,000 in annual property tax payments, in addition to a reduction in administrative and audit costs.

Keizer said the sale of the water system would also lead to a reduction in insurance costs for Waldoboro.

Keizer said she supports the sale.

“As a town, we shouldn’t be in the water business,” she said.

The Maine Public Utilities Commission would have to approve the sale, according to Knowlton.

Knowlton said that if 10 percent of residents petitioned the PUC, the department would begin an investigation into the proposed rate increase and the Maine Office of Public Advocate would get involved in the process.