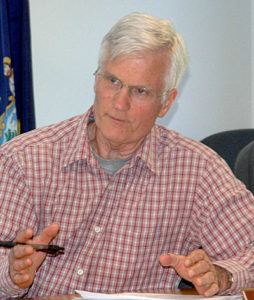 Waldoboro Selectman Bob Butler speaks in favor of a special town meeting to address the budgets for the town manager’s office and the fire department. (Alexander Violo photo)

The Waldoboro Board of Selectmen voted 3-1 in favor of holding an open special town meeting to address the budgets for the office of the town manager, rejected at the annual town meeting; and the fire department, incorrectly printed in the town warrant.

During the first meeting of the board since the town meeting by referendum Tuesday, June 14, the selectmen agreed that an open meeting would be the more effective and cost-efficient way to resolve the issues.

Town Manager Linda-Jean Briggs said a secret-ballot vote would cost the town about $1,500 and the town would have to wait 45 days to meet various requirements.

The selectmen will meet with the Waldoboro Budget Committee on Tuesday, June 28 and could schedule an open town meeting for as soon as Wednesday, July 6, according to Briggs.

Selectman Jann Minzy said the benefits of an open town meeting include cost, speed, and the opportunity to understand voters’ concerns. However, Minzy said more people would likely partake in a referendum vote.

After initially voicing support for an open town meeting because of the low number of articles, Selectman Katherine Winchenbach expressed support for a referendum vote.

“I agree with the referendum voting. If you want to gain the trust back from the people, you have got to give them what they want, and I think this would be a good step in the right direction. Let the people vote on it,” Winchenbach said.

Budget committee member John Higgins also said he would prefer a election to turn down the budget of the town manager … this is important feedback and we need to take this into account,” Butler said.

He said personally he would like to see the budget approved and the town manager’s contract extended beyond a recent one-year renewal.

“If the contract with the current town manager is not extended in accordance with its terms, I’d also like to see the appointment of a search committee no later than January of 2017. If we are to hire a new town manager, we must begin the search to ensure we have someone available to start on July 1, 2017,” Butler said.

Prior to the discussion on the office of the town manager’s budget, the board voted to reconsider the fire department’s budget and voted to increase the figure in the article by $1,991 to $160,081 to address a mistake in the warrant.

Fire Chief Paul Smeltzer asked if the article would address the error in the town warrant.

“When (voters) see it, I don’t want them to think we are coming back asking for more money,” Smeltzer said.

Briggs said there are restrictions on what language can go on the warrant, but she would look into the matter and provide information to voters when they pick up their ballot if the language cannot be added to the warrant.