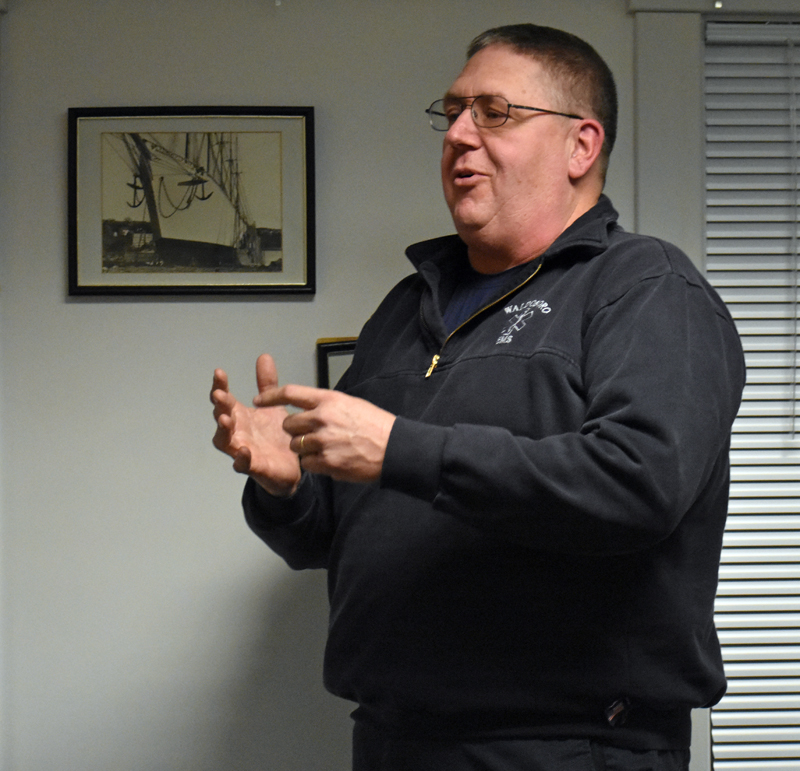 Kyle Santheson discusses the concept behind a recreation committee during a meeting of the Waldoboro Board of Selectmen on Tuesday, Feb. 27. (Alexander Violo photo)

The Waldoboro Board of Selectmen voted unanimously to form a recreation committee Tuesday, Feb. 27.

After a discussion about the former A.D. Gray School, community support for the development of a community center, and the need for community input on future recreational projects, the board unanimously voted to form a nine-member committee.

Based on a motion by Selectman Abden Simmons, the committee members will include the town’s recreation director, Marcus Benner; a board member of the Medomak Valley Community Foundation; and seven residents.

Keizer said that at the foundation’s meeting, foundation board member and former Waldoboro Recreation Director Kyle Santheson came with an outline for the town and the private organization to move forward together, centered upon the formation of a recreation committee and a renewed spirit of cooperation.

“I think there was a real sense we have to be cooperative in this effort, open lines of communication, establish a committee, and garner public support for it,” Keizer said.

Keizer said A.D. Gray is not the only potential location for a possible community center and the committee could look at different sites and develop plans.

“I sensed there was disappointment the A.D. Gray plan didn’t move forward with the select board, but I couldn’t support it at this time,” Keizer said.

Keizer said the town is still considering the future of A.D. Gray and the town’s planning consultants, Bill Najpauer and Max Johnstone, of the Midcoast Economic Development District, will present plans for the site at the selectmen’s next meeting.

Keizer said the new committee’s purview could extend beyond a community center.

“This might have a scope larger than a community center and could include Marcus (Benner) with other aspects of recreation,” Keizer said.

Addressing the board, Santheson said the town had a recreation committee before, around 1996, when the land near Miller School, now home to the recreation complex, was acquired.

Santheson said the Medomak Valley Community Foundation was formed in 2003 and the foundation and the committee worked to complete the recreation complex in the following years.

Santheson said the development of the Miller ballfields was part of a three-phase plan, the final portion of which was bringing a community center to Waldoboro.

“I think it’s important the town is involved in the planning process. It needs to be a partnership like what we had when the Medomak Valley Community Foundation came on board. We ran down the track at the same speed and the same time and opened a beautiful recreation center in 2008,” Santheson said. 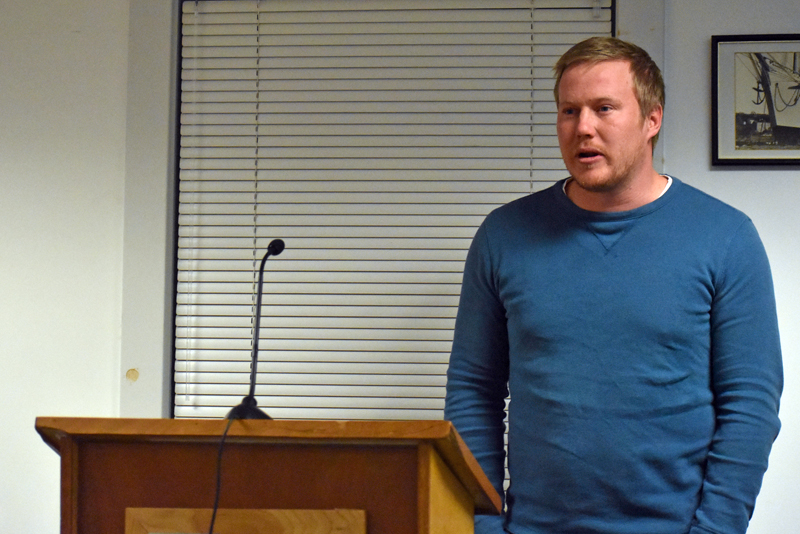 Santheson said he feels it is important to include the town in working toward a community center and such an effort needs to be grounded in grass-roots support.

“If we really are serious about a community center in the town of Waldoboro, the people have to want it,” Santheson said.

“They have a new charge now and maybe can come forward with a plan for your consideration,” Santheson said.

Santheson backed Simmons’ suggestion for the makeup of the committee.

“It needs to be a cross-section of the town to gauge what the people want and what that looks like,” Santheson said.

“I strongly encourage you to think of it that way. Something more broad than a recreation committee, but the final phase of the initial plan,” Hall said.

Hall said the community center would not have to be located at A.D. Gray. He said the former school emerged as a favorable idea due to its location in the heart of the village and its popularity during the annual Waldoboro Day event.

Benner said the new committee could be a useful resource beyond a community center project, and could provide the department with ideas and volunteers for future town events.

Santheson said the new committee could also look at other areas of community interest, including the creation of a dog park or a playground.

Town Clerk Eileen Dondlinger proposed that the new committee could be a recreation committee, but its first task could be to work on plans for a community center.

Selectman Robert Butler suggested that the committee create a mission statement once its membership is in place.

Selectman Clinton Collamore echoed Butler’s statements and said roles and goals would be a good place for the committee to start.

A petition to force the town to sell A.D. Gray, mulled by the Medomak Valley Community Foundation prior to the organization’s board meeting, was not discussed at the selectmen’s meeting.