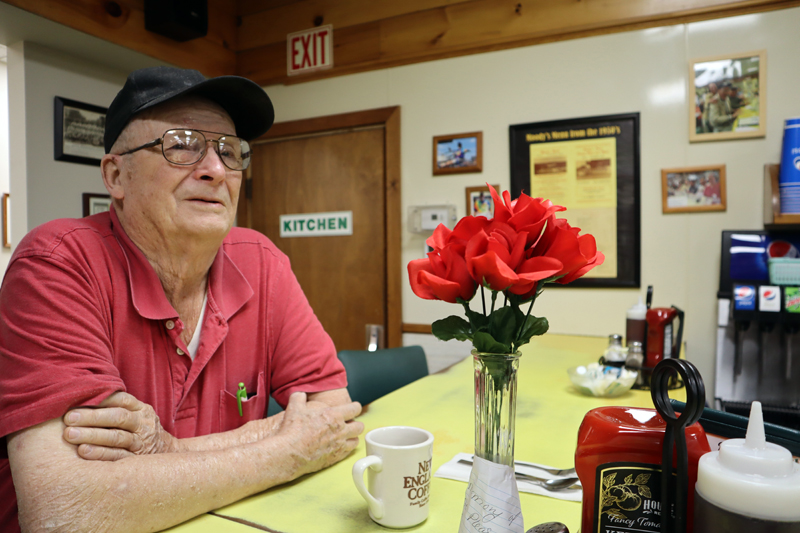 Paul Achorn sits at the counter of Moody’s Diner, waiting for the other regulars to arrive for dinner. The chair in the corner along the wall is Charlie Peters’ regular spot. (Emily Hayes photo)

Paul Achorn sits at the far end of the counter at Moody’s Diner in Waldoboro. Most days he arrives closer to 5 p.m., but he was already out of the house and decided to head over early. He sips a cup of black coffee, chatting with the waitresses when they have a break between customers, waiting for Carol Poulin and Eleanor Durgan to arrive.

Friends of Achorn, they drift in one at a time, taking their usual seats at the counter. But one chair in the corner along the wall remains empty.

Typically Charlie Peters sits in the corner seat for every lunch and dinner meal.

But a fire destroyed his camper trailer the week prior, and Peters lost everything. The town of Waldoboro and county YMCA quickly got involved, purchasing clothing, food, and organizing a hotel room for him.

The community navigator in Waldoboro, Karen-Ann Hagar, quickly learned that Peters had no family in the area. But he had his Moody’s family.

“A lot of them have reached out and asked how he’s doing, and taken him food and funding,” Hagar said.

Poulin signed Peters up for the food bank just days before the fire destroyed his camper, and others in the Moody’s family paid to have his truck worked on at Tyler’s Towing and Auto Repair while Peters works with the town to figure out his next steps. 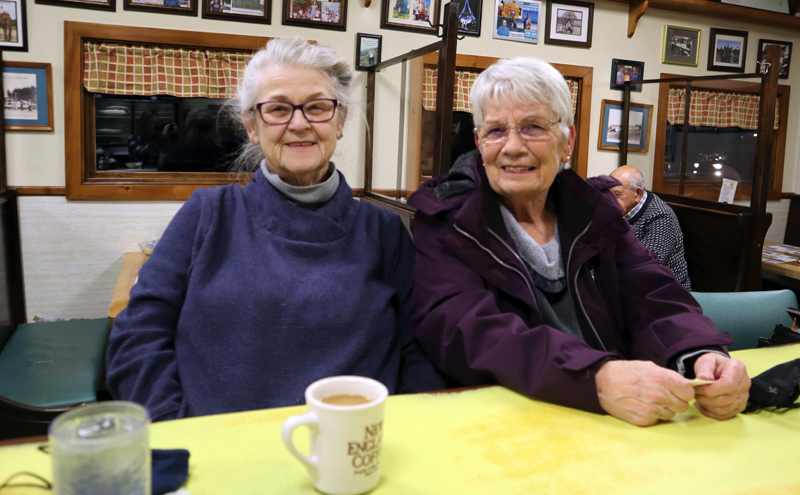 Eleanor Durgin, left, and Carol Poulin brought food and donated money to help Waldoboro resident Charlie Peters after his home burned down. They are part of his “Moody’s Diner Family.” (Emily Hayes photo)

“They’re friends, they sit together every night,” Beck said.

Peters has worked as a trash collector in Waldoboro for nearly 30 years, and amassed a number of friends, including Carl Cunningham, one of the Moody’s counter folks who started a GoFundMe page to raise money for clothes, a new place to live, and a reliable vehicle for Peters while the town searches for a suitable assisted living home.

Cunningham also created an account at The First National Bank to collect donations for Peters if people are hesitant to donate online.

“It’s a hard time of year to have to start all over,” Cunningham wrote on the GoFundMe page. “Even the smallest amount would be greatly appreciated.”

Even before the fire, the Moody’s family has taken Peters to get bottles of petroleum or out to dinner. Poulin drove clothing and debit cards for food between the town of Waldoboro and Peters’ hotel, along with donating to the fund at the bank.

“They said there are a lot of people stepping forward,” Poulin said. And on the GoFundMe page, 34 people have donated $1,860 collectively.

People in Waldoboro are doing what they can to help because Peters is “everybody’s friend,” Durgan said. “He doesn’t have much, but he’d be there to help you if possible.” 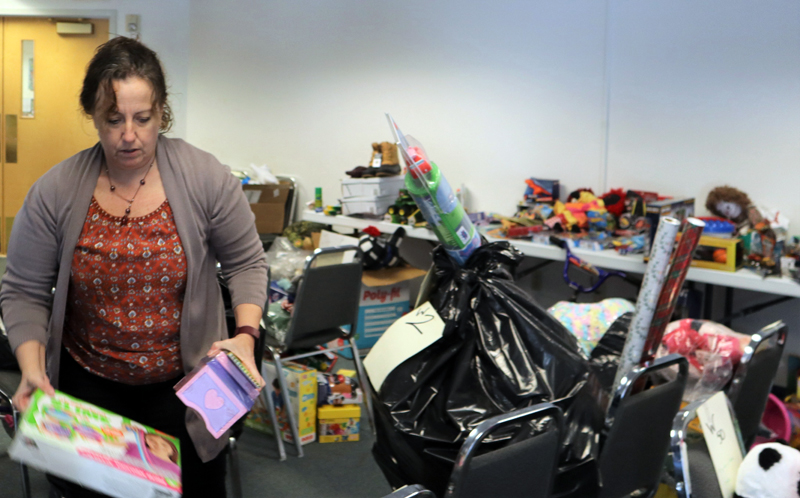 Karen-Ann Hagar, community navigator for Waldoboro, took time out of packing Christmas toy donations up for families to help Charlie Peters after his home burned down. (Emily Hayes photo)

“When a family doesn’t exist, then we partner up with resources such as the Tedford Housing shelter,” which is located in Brunswick, Hagar said.

As community navigator, she shines a spotlight on resources in Lincoln County and fills the gaps between the resources to ensure residents get what they need from each to achieve a full recovery from what they are going through, including providing everything from a microwave to underwear in the temporary housing space.

As the town works to place Peters in an assisted living home, the Moody’s Diner family is advocating for Peters to stay in a facility close to Waldoboro.

“He’s been here all his life,” Durgan said. “This is his family – the people at the counter.”

For readers interested in donating to help Charlie, the fundraiser on gofundme.com is entitled “Help Charlie get back on his feet.” The name on The First National Bank account for donations is Charlie Peters.