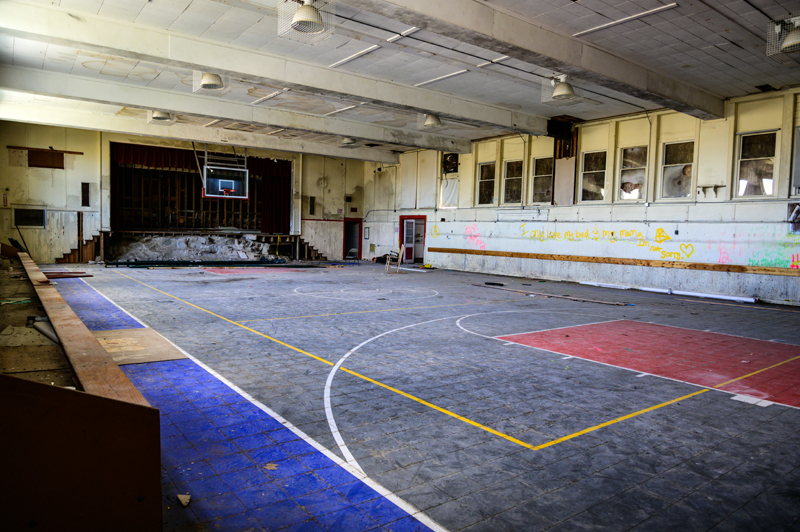 Graffiti mars the walls of the gym inside the A.D. Gray School building in Waldoboro on Saturday, May 1. (Bisi Cameron Yee photo)

Waldoboro will hold a forum Thursday, May 13 to provide information to the public regarding the two proposals for the former A.D. Gray School on the ballot for the annual town meeting by referendum June 8.

Built in 1935, the 30,000-square-foot building has been vacant since Medomak Middle School opened in 2009. Town officials have debated what to do with the 8.6-acre property, which includes the building, athletic fields, and tennis courts, ever since.

In 2012, the Central Lincoln County YMCA entered an agreement with the town of Waldoboro to repurpose the building as a YMCA facility, but the YMCA withdrew from the project in 2015.

The town put the property on the market in early 2018, but it has not sold. Suggestions for its use have ranged from elderly housing to a commercial kitchen to a community center to an upscale apartment building.

In November 2020, Waldoboro voters favored the transfer of A.D. Gray to Volunteers of America for $1 to be redeveloped as affordable senior housing, indicating as much in a nonbinding referendum by a more than 4-to-1 margin.

The national nonprofit has proposed a $6.2 million plan to turn the school into as many as 36 units of affordable housing for seniors.

Opponents of the Volunteers of America plan would prefer to demolish the building and use the property as a park. They brought their plan to the board of selectmen in December 2020.

According to spokesperson Surran Pyne, the A.D. Gray Park Coalition envisions a number of potential uses for the property, including sports, concerts, a farmers market, and other gatherings.

Pyne said the plan could be implemented at no cost to taxpayers. She said the coalition estimates that it will cost $300,000 to raze the building, remove the obsolete tennis courts, fill the foundation with dirt and loam, seed the property, and restore a wetland and buffer.

As of March 8, Pyne said that the group has received over $180,000 in pledges toward those costs without fundraising in earnest for the project.

“This park is not a Band-Aid,” Pyne said during a selectmen’s meeting in February. “This park is transformative.”

“I think it’s important that the public have the chance to ask questions of both sides of the argument with a moderator who can facilitate the discussion,” Waldoboro Town Manager Julie Keizer said during an April 27 selectmen’s meeting. “I know there’s a lot of misinformation out there and I get asked questions I truly do not know the answer to.”

There will be limited in-person seating at the town office, intended for residents without reliable internet service and those who want to ask questions, according to the town office. All others are encouraged to attend via Zoom or watch the recording when available on the town’s YouTube channel.

The Zoom meeting ID is 993 8590 5635 and the passcode is 1600. A link is available at waldoboromaine.org under the “Stay Connected” tab. Anyone in need of assistance should contact the planning department.

The town office encourages the public to submit written questions to planning@waldoboromaine.org prior to the meeting to ensure they will be asked during the forum.