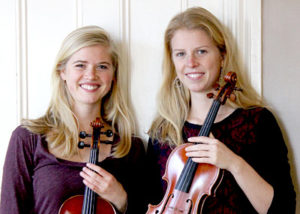 Many people, even those who are not classical music buffs, are familiar with the lively, beautiful strains of Antonio Vivaldi’s four-part musical masterpiece called “The Four Seasons.” More often than not, it is performed by a full symphony orchestra. At 7 p.m., Saturday, June 25, however, “The Four Seasons” will be performed by a talented young chamber sextet at the Broad Bay Congregational United Church of Christ in Waldoboro.

Presented by the church and the Medomak Valley Land Trust, the Celebration of the Watershed Through Music and Images will be a multimedia presentation, featuring a series of 140 images of the scenic Medomak River watershed through the seasons projected onto the right and left walls of the church while the musicians perform center-stage. Even more exciting, perhaps, is the fact that two of the six musicians involved are native daughters of Waldoboro, 24-year-old violinist Josie Davis and her 21-year-old sister, violinist Sophie Davis. 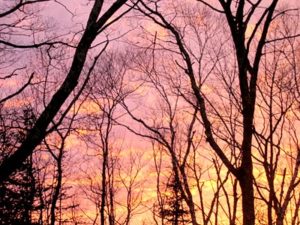 A photograph of a Medomak Valley sunset, one of 140 images to be featured at the Celebration of the Watershed Through Music and Images at the Broad Bay Congregational United Church of Christ in Waldoboro on Saturday, June 25. (Photo courtesy Sophie Davis)

“We’ve had a lot of concerts, but nothing like this,” said Ted Smith in a recent phone conversation. Smith is a member of the church who assists the pastor, Nancy Duncan, in planning events.

“This would be the most distinguished group we’ve ever had,” he said.

In addition to the Davis sisters, the accomplished group consists of their cousin, Maya French, of Belfast, who is also a violinist; viola player Colin Wheatley; cellist Jaime Feldman; and Nate Martin on upright bass. French, Martin, Wheatley, and the Davises are all on the faculty at Bay Chamber Music School in Rockport.

“They have been playing in our church since they were small kids,” Smith said of the Davis sisters. “Needless to say, the sisters are very close. They have played every violin duet they could get their hands on.”

In addition to playing violin duets with her sister, Josie Davis has also had a long-standing love for “The Four Seasons.”

“I have loved ‘Four Seasons’ my whole life,” she said in a recent phone interview from Rhode Island.

As for her idea to put together a concert pairing Vivaldi’s season-celebrating music with watershed images, Davis said, “It was something I have thought about for a while, and I really love presenting classical music that’s really accessible for everyone. And I want to celebrate the beauty that’s around us.”

The event is a collaboration between the musicians, the church, and the land trust, she said.

It is also a collaboration with members of the community. Davis put out a call for images and received a significant response. Everyone who submitted photographs, she said, will have at least one image in the show. The Medomak Valley Land Trust also supplied images, including aerial shots of Waldoboro and Peters Pond.

As for the six musicians, “We have all played together a lot, but not in this configuration” of all six of them together in the same concert, Davis said. “We’re really excited.”

Davis said she is very much interested in “cultivating awareness and appreciation for the environment” via the Celebration of the Watershed through Music and Images, “and hopefully (audience members will) come away with the desire to protect it.”

Davis agrees that what she and her sister are engaging in is a sort of musical environmental activism.

“We both have a strong interest in bringing together music and environmental activism,” she said.

The sextet will close the show with the second movement, the “Playful Pizzicato,” of Benjamin Britten’s “Simple Symphony.”

“It is totally uplifting and different from anything in the program,” Davis said, “and I always like to end with something fun. There are no bows in the piece – it’s all pizzicato.” Pizzicato refers to plucking the strings instead of using a bow.

“For the two of us having grown up in Waldoboro, we are always so humbled to come home and play,” said Davis of her and her sister’s upcoming performance. “It’s our favorite way to spend the summer.”

Representatives of the Medomak Valley Land Trust will be on hand at the event to answer questions about the land trust’s work.

Donations for the free event will be accepted at the door. For more information, call 832-6898 or email waldoucc@midcoast.com. The Broad Bay Congregational United Church of Christ is located at 941 Main St. in Waldoboro.