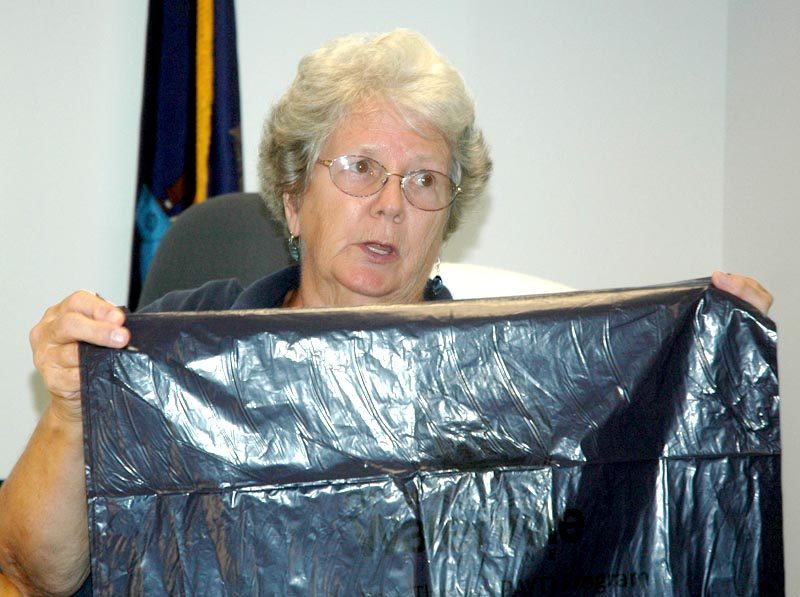 Waldoboro Selectman Katherine Winchenbach holds up one of the pay-as-you-throw bags used in Waterville during a public hearing on whether to send pay-as-you-throw to voters. (Alexander Violo photo) 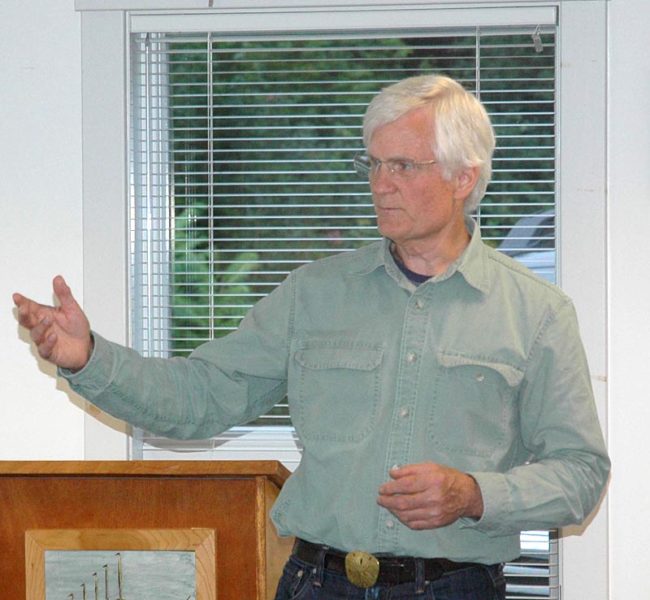 The Waldoboro Board of Selectmen voted unanimously to put the pay-as-you-throw disposal method on the November warrant, so voters will decide whether to adopt the waste management strategy.

The matter was discussed during a public hearing Tuesday, Aug. 16. The selectmen listened to a presentation on the disposal method.

Under the pay-as-you-throw method, everyone pays for what they throw away on a per-bag basis.

Selectman Clint Collamore expressed support for sending the matter to voters, giving citizens an opportunity to voice their support or opposition on the matter.

“I think going to the people is the way to go,” Minzy said.

The hearing opened with a presentation from the Waldoboro Transfer Station Committee, with Bob Butler, a selectman and chairman of the committee, reviewing details of the pay-as-you-throw model.

Butler said that with tipping fees likely to rise in the future, the committee feels it is necessary to explore options to lessen the tonnage of trash being shipped to solid waste disposal facilities.

“You are paying for only what you throw away. You are not paying for what your neighbors throw away. It’s a fair way of doing this and it encourages recycling … the idea is to encourage people to recycle more and throw away less. We ship less tonnage, we have fewer bags. That means less money to truck and tip at PERC or eventually at Fiberight,” Butler said.

He said currently roughly half of the transfer station’s budget goes toward transporting and tipping trash.

“Over the last six years, that’s $1.8 million just to tip and burn our garbage,” Butler said.

Butler said in the 2016 fiscal year $474,056 in taxes were paid to support the transfer station’s budget.

“In one sense, you are shifting the cost from the town as a collective to the individual, but you are doing something more than that. You are requiring each of us to think about what we are doing. The pay-as-you-throw concept requires us to change our habits,” Butler said.

Selectman Katherine Winchenbach asked how the pay-as-you-throw method would impact large local businesses that utilize dumpsters taken away by haulers as opposed to individual bags.

She was concerned the haulers who didn’t recycle would cost the town more money.

Public Works Director John Daigle said haulers who didn’t take the time and effort to recycle would be charged accordingly.

During the public comment portion of the meeting, opinions were expressed both for and against the proposed waste disposal method.

Concerns were raised over the proposed model’s impact on year-round residents and local businesses.

Additionally, support was voiced for the present state of the transfer station and quality of service offered under the current model of municipal waste disposal.

Marcia Drenzyk, a Waldoboro resident, expressed appreciation for the town’s willingness to have a discussion on recycling.

“I’m glad we are having this dialogue. I’m glad this is coming up in front of the board. I have no agenda one way or the other about pay-as-you-throw or doing it the way we are doing it right now. But I think if it raises the awareness of people that recycling will save us money, then perhaps it will encourage the rate of recycling just even having this discussion,” Drenzyk said.

Daigle voiced his support for pay-as-you-throw, said he has been in favor of the method for a number of years, and expressed frustration that the question of pay-as-you-throw has never been put to the voters.

With the decision to place the question on the ballot, the transfer station committee will begin a series of educational seminars to inform the community about pay-as-you-throw.

The Waldoboro Transfer Station also serves the municipalities of Cushing and Friendship, and Butler expressed willingness for those towns to be a part of the process, suggesting that they vote on the measure through their warrants to gauge the two towns’ support for pay-as-you-throw.