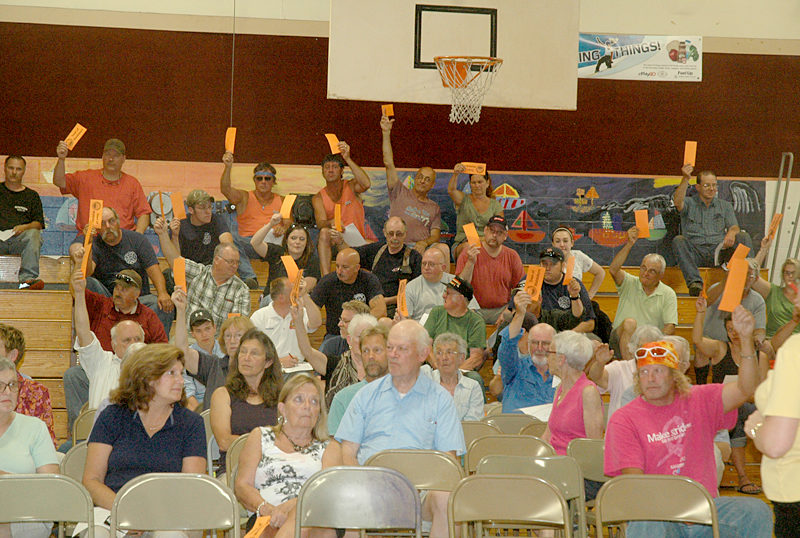 Waldoboro voters raise their cards in support of a secret ballot at a special town meeting in Waldoboro. (Alexander Violo photo) 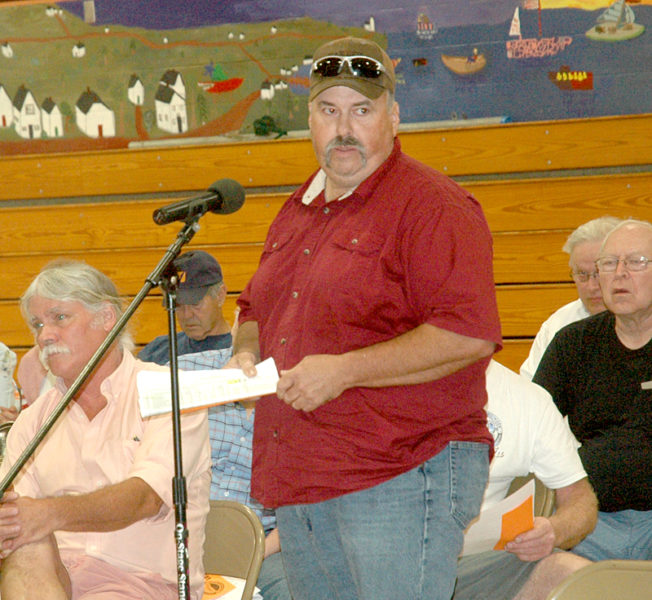 William Maxwell proposes an amendment to reduce the budget for the town manager’s office during a special town meeting on Wednesday, July 6. (Alexander Violo photo)

More than 80 voters in attendance at a special town meeting at the Miller School in Waldoboro approved the one article rejected at the annual town meeting by referendum in June, but not before reducing the recommended amount.

The vote runs contrary to the recommendations of the board of selectmen and budget committee, which voted 3-2 and 5-3-1, respectively, to raise and appropriate $148,438 for the article, the same amount rejected during the referendum.

In June, the article failed by a vote of 367-335. It was the second year in a row the budget for the office had failed to carry.

The budget approved during the special town meeting on Wednesday, July 6, is an increase of $3,371 or 2.5 percent. 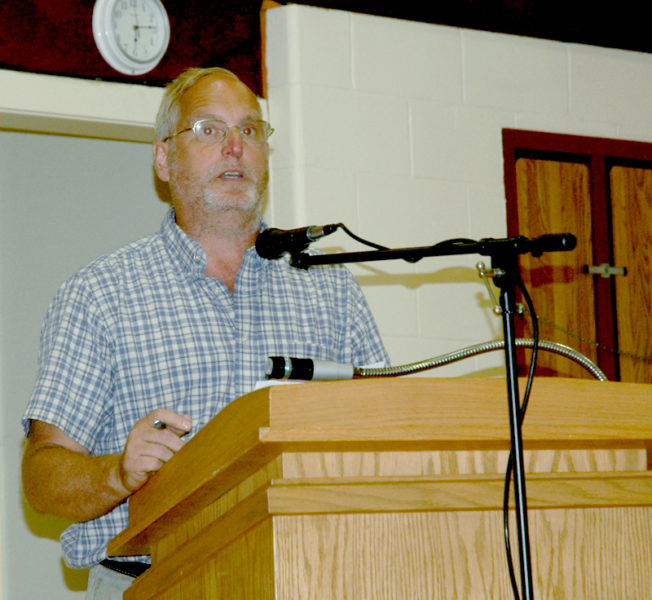 Not all in attendance at the meeting were in favor of reducing the budget as presented.

“We don’t pay our people enough around here,” former Selectman Steve Cartwright said. “We are very low on the scale. I think what we really should do is endorse and vote for the full amount. That is a reasonable amount. We are still paying our people below what other towns of our size pay their employees and I think this budget is well within reason.”

Voting at the special town meeting was conducted via secret ballot after a motion to forgo hand counting was approved at the outset of the open town meeting.

Before the vote, resident Nancy Noyes expressed her frustration about the vote taking place in an open town meeting instead of a referendum-style vote.

“This is really kind of a slap in the face of the voters who said we wanted to have referendum ballots … and not to have open meeting ballots, and here we are in an open meeting on something that was voted down yet again. I just don’t think it’s fair to the voters to be doing this again,” Noyes said.

Speaking on behalf of his amendment, Maxwell said the amount should be lowered since the budget did not pass at the annual town meeting.

“I feel the selectmen owe the citizens of this town a lower figure. I don’t care what the amount is, but they should come back with a lower amount,” Maxwell said.

Town Manager Linda-Jean Briggs said the budget contains $70,000 for her salary, as well as a percentage of two other town employees’ salaries and funds for office supplies, utilities, and other items.

“That total number is not my salary nor will it be the salary of any future town managers,” Briggs said.

The second amendment of the evening, to cut $10,000 from the request, was made by John Higgins, a member of the budget committee.

Butler said a reduction to the budget could hamstring the town moving forward if it needs to hire a new town manager.

“If you want a new town manager in June of next year, you have basically set the salary at $70,000, and we won’t be able to change that number if this amendment passes. We won’t be able to change this number until the next election in June, and if you want to do a good job of getting a new town manager in place, you really ought to start your search in January and have it completed by March, and what you are basically saying with this amendment is that this town is offering $70,000 for a position, and that salary is not competitive,” Butler said.

“I just think we should move on. We should get a grip and act like adults. Leave the personal issues behind and run the business of the town. Pay up what we have to pay up. It’s a couple of pennies on your tax bill. It’s not about the money. We just need to move forward and deal with important stuff,” Hall said.

Ellen Winchenbach, a member of the budget committee, expressed frustration with the negative attitude around portions of the evening’s discussion.

“It’s a shame that this article is being cut $10,000,” Winchenbach said. “I did serve on the committee to search for a town manager and I will say this publicly: the town manager that the selectmen hired was number one on our list out of all the resumes that we had, and believe me, I heard Rockland had four times as many candidates, and it’s sad the trouble that Rockland is having.

“I think we are very lucky to have this town manager and I think we need to be more respectful to our town officials and our department heads.”

Voters overwhelmingly approved the other question on the warrant for the special town meeting – a fix to an error in the warrant article for the Waldoboro Fire Department budget.

By a tally of 76-5, residents voted in concordance with the board of selectmen and budget committee, which voted 5-0 and 6-0-1, respectively, in favor of the fix.