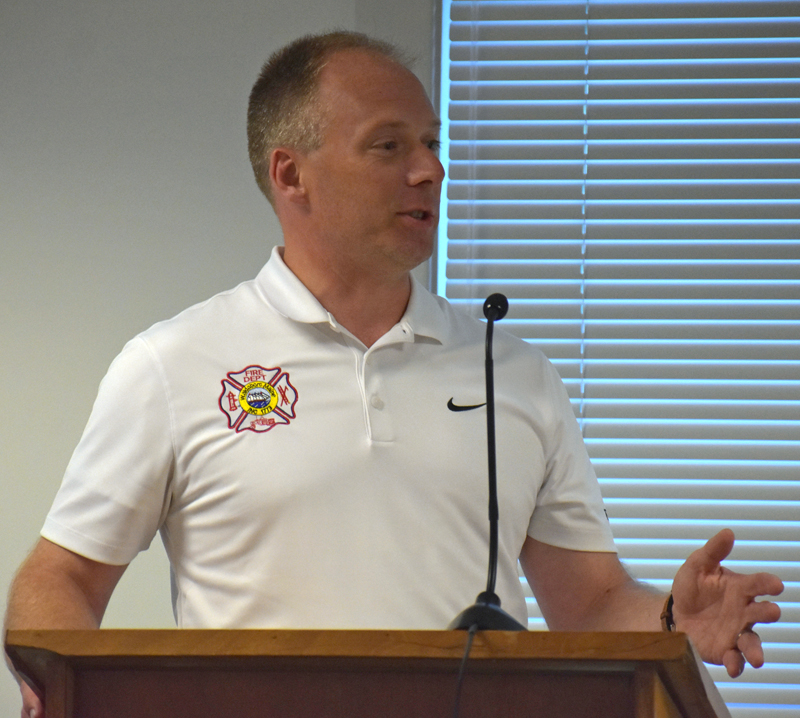 Waldoboro officials discussed the need to buy a new, nearly $1 million ladder truck during a well-attended Waldoboro Board of Selectmen’s meeting Tuesday, Aug. 28.

“We have known for a long time we needed to replace the ladder truck,” Waldoboro Fire Chief Paul Smeltzer said.

“The truck we are looking at is expensive. My greatest concern is how we are going to pay for it,” Smeltzer said. “The truck will service the town for 30-40 years, but that doesn’t make paying for it any easier.”

The department’s specifications for a vehicle do not include any extravagant options, according to Smeltzer. The department is recommending a model that costs $990,000.

Smeltzer said the town has not addressed the need because the department needed to replace three other trucks and he didn’t want to incur multiple loans at the same time.

“There has been no viable replacement plan in Waldoboro for decades. I have done my best to be frugal and responsible at the same time,” Smeltzer said.

The town’s current ladder truck is a 1981 American LaFrance. The truck did not pass certification two years ago, but the department still uses it to carry firefighters and equipment to emergency calls, Smeltzer said.

Without its own ladder truck, Waldoboro has had to rely on assistance from nearby towns with ladder trucks.

Smeltzer described the past two years as stressful and said the town has been lucky not to need a ladder truck’s services during this time.

Town Manager Julie Keizer said that if the town decides to buy a ladder truck, it will issue a request for proposals and look into financing options.

Keizer said the matter would go before the Waldoboro Budget Committee in late September or early October. The committee will discuss debt service and a 10-year capital plan. If the town buys a truck, it would likely do so early next year. 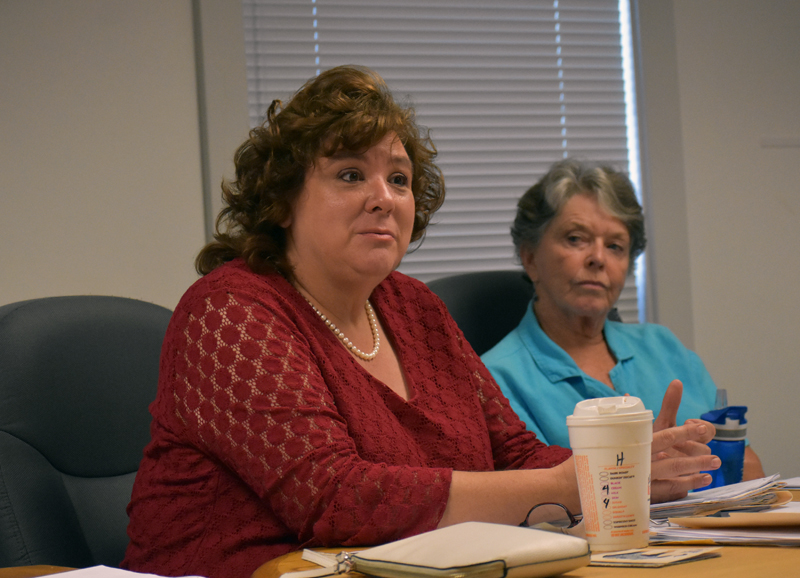 “When I got here a year ago, we needed to have this discussion,” Keizer said.

Smeltzer said other volunteer fire departments have staffing issues, as Waldoboro does, and nearby departments with ladder trucks are not required to come to Waldoboro’s aid.

“We may or may not get a response if we needed them. We hope they would come; we just can’t guarantee it,” Smeltzer said.

Smeltzer said any insurance savings from an improvement in the town’s  rating would not recoup the expense of a ladder truck.

Smeltzer said the town has an Insurance Services Office, or ISO, rating of 5 where the town has fire hydrants and a rating of 9 outside this area, with 10 being the end of the scale. Being more than 5 miles from a fire station leads to a rating of 10. 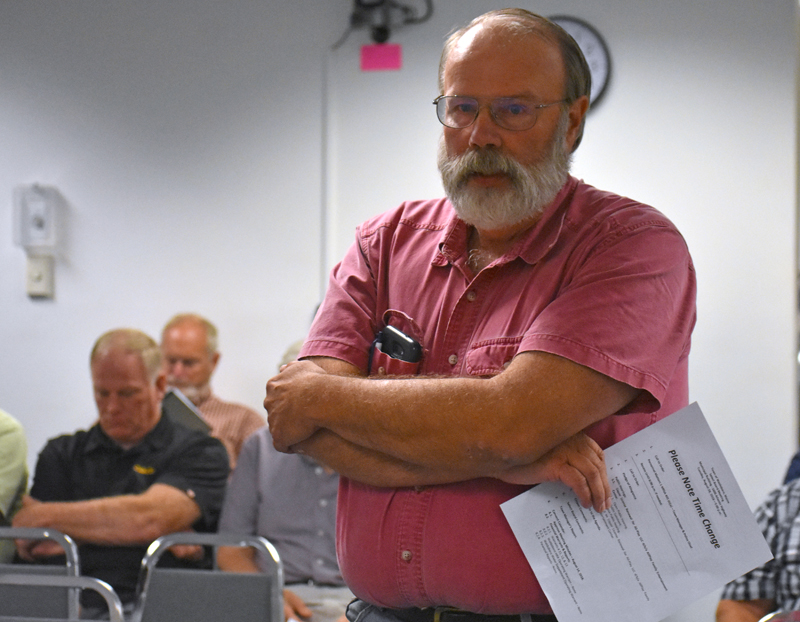 Carleton Johnson, of Waldoboro, expresses concern about the cost of a ladder truck during a Waldoboro Board of Selectmen’s meeting Tuesday, Aug. 28. (Alexander Violo photo)

“We get a lot of credit for having a ladder, but don’t know how to translate the credit to dollars,” Smeltzer said.

Smeltzer said his “intention is to have no impact on the mil rate based on what we put into capital reserve and with the debt service on Engine 4.”

Keizer said funds would come from savings from the last three to four years and the debt service payment on the last truck purchase.

“Historically, this town saves money to make capital purchases … when interest rates were lower and money was cheap, you should have borrowed money for capital and invested in infrastructure and capital improvements,” Keizer said.

Keizer said a new ladder truck would not result in an increase in the mil rate, but the same cannot be promised for other apparatus acquisitions if needs develop in the future.

“The mil rate won’t see an increase and that is something Paul needs to be congratulated for, because he thought ahead,” Keizer said.

Smeltzer acknowledged the age of the department’s overall fleet, saying one truck is a 1989 model.

“They’re not getting any younger. Realistically, in seven years we will be looking at an impact to the mil rate,” he said.

Smeltzer said the department looked into buying a used ladder truck, but the town’s need for modifications to the truck’s chassis for mobility and parking purposes means that option is not workable. 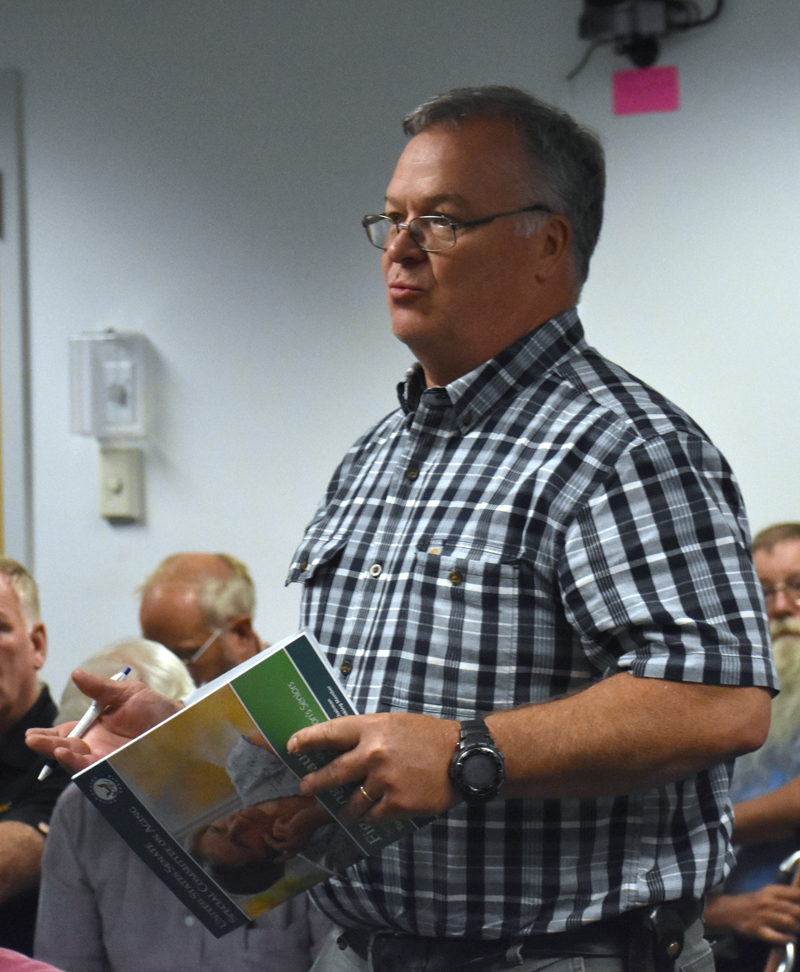 Waldoboro Deputy Fire Chief Dale Smith discusses the benefits of a new ladder truck, including the ability to rescue someone in the upper stories of a tall building. (Alexander Violo photo)

“The truck we are recommending has been manufactured less than 10 years and no used vehicles are available,” Smeltzer said.

Smeltzer thanked members of the fire department who put their personal vehicles and vacation time into finding the best deal for the town.

“They traveled all over the Northeast, as far as Pennsylvania, using their own vehicles and vacation time, so we could have the right truck,” Smeltzer said.

According to Smeltzer, the department is recommending a Pierce truck.

Carleton Johnson, a resident, raised concerns about the cost.

“You are embarking on a program that should have procedures and be studied before you purchase the most expensive equipment this town has purchased to date,” Johnson said.

“What I am asking for is a comprehensive report and review that backs the selectmen and the town embarking on this plan,” Johnson said.

Johnson said he is of the opinion that it is wiser to pay cash than to borrow funds for purchases.

“I am concerned with my perception of the lack of an outside study of the need for this before we spend $1 million. We need to make sure we need this, make sure it is truly a capital item,” Johnson said.

Keizer said the selectmen and budget committee would thoroughly review the matter.