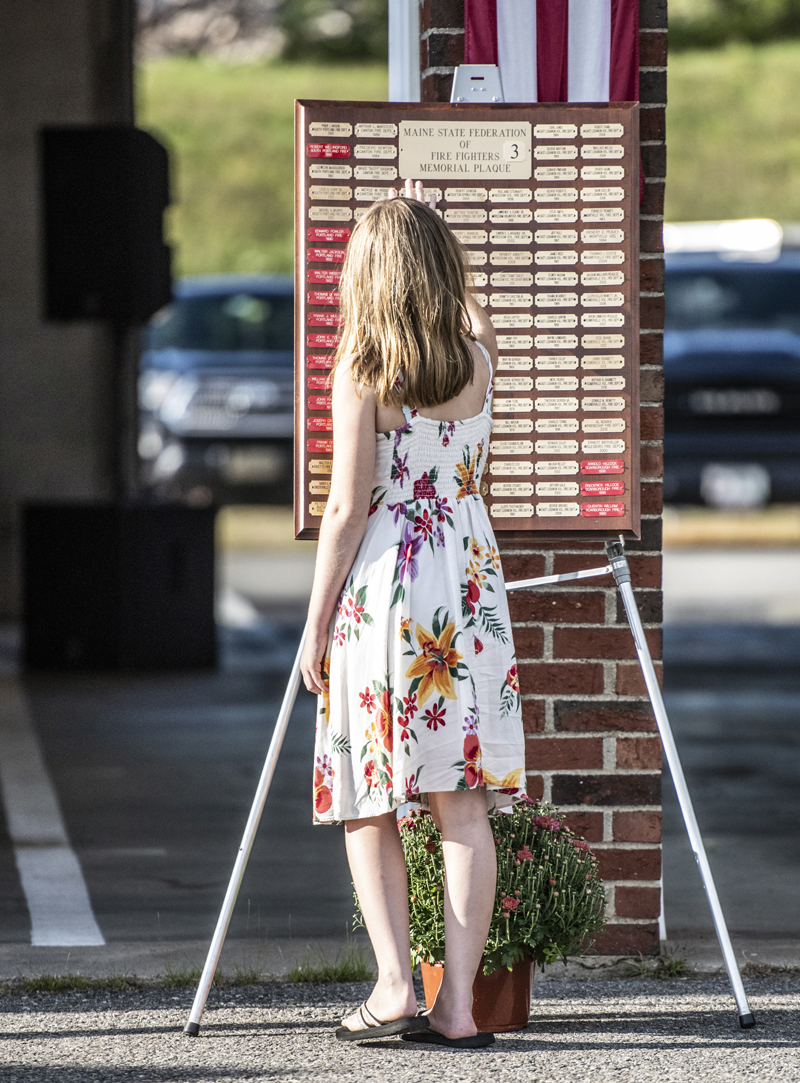 Abigail Babineau, 11, of Edgecomb, looks for her grandmother’s name on a memorial plaque on display at the fire station in Waldoboro on Friday, Sept. 10. Deborah A. Cole served for over 40 years with the South Portland Fire Department and died at the fire station there in 2009. (Bisi Cameron Yee photo)

On the morning of Saturday, Sept. 11, Felix Gustafson, age 4, was seated in a folding chair along Main Street in Waldoboro, waiting patiently for a line of fire trucks from across the state of Maine to pass before him.

Felix is obsessed, according to his mother. He has a fire truck bed, a firefighter’s helmet and jacket, and too many toys to count.

As fire engines old and new, from those once drawn by horses to those outfitted with 100-foot ladders, drove past the judging stand, Felix was there, pointing, beaming, and saluting his heroes.

The 57th annual convention of the Maine Federation of Firefighters took place from Friday, Sept 10 to Sunday, Sept. 12 in Waldoboro. The convention included a memorial service, parade, trade show, banquet, and a muster on the last day.

On Friday evening, firefighters from across the state, led by piper Michael Lundin from the Maine Public Safety Pipe and Drum Corps converged on the fire station for a special memorial service to honor not only Maine firefighters who lost their lives, but also to commemorate the firefighters who died 20 years ago in the attack on the World Trade Center in New York City.

Mark Gay, executive vice president of the federation, read the roll call of Maine firefighters who died in the last year. A brass bell was struck as each name was read. The firefighters in attendance maintained a silent salute throughout. The ceremony ended with The Firefighter’s Prayer.

On Saturday morning, a parade of fire trucks and marchers from the Pipe and Drum Corps, Maine Forest Service, and Dexter Fire Department, who walked in support of a member fighting breast cancer, wound from the vacant Sylvania property on Friendship Road through downtown Waldoboro, past a judging stand near the American Legion and ended at Miller School.

Hundreds of residents lined both sides of the street to wave and cheer for their favorite vintage engines.

Ken Desmond, president of the Maine Federation of Firefighters drove a 1922 truck in the parade. Reflecting on the importance of the anniversary of 9/11, he said “It’s amazing how we’ve grown stronger in 20 years. We are getting closer as a family of firefighters in this country and in this state.”

A firefighter’s trade show at the Medomak Valley High School was a popular stop after the parade. A banquet was held at the Samoset Saturday evening.

On Sunday, the Waldoboro Fire Department hosted a firefighters’ muster at the Waldoboro Recreation Complex. Musters are a traditional gathering of the troops. The first  muster on record was held in Bath in 1849.

Waldoboro Fire Chief Paul Smeltzer closed out the festivities after the muster by thanking members of his department who worked so hard over the course of the last three years to ensure the convention’s success.