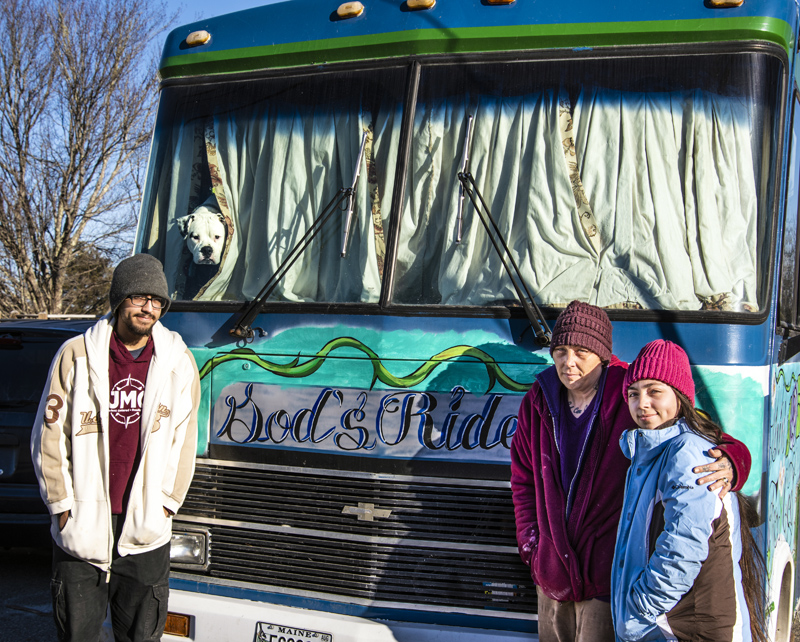 From left: Jacob, Jennifer, and Marijane Guerrero stand in front of their bus in Waldoboro on Jan. 23. The Guerreros plan to continue their traveling ministry after the loss of their husband and father, Joe Guerrero. (Bisi Cameron Yee photo)

Joe Guerrero died tragically but lived joyfully. And he left behind a legacy for his family. His wife, Jennifer Guerrero, and their children, Jacob and Marijane, are determined to continue his ministry.

On Sunday, Jan. 3, the 41-year-old traveling pastor died while working on the rear brakes of the family’s modified bus in Waldoboro. The Guerreros lived in the bus-turned-camper and used it to travel through Maine and New England, to practice their ministry and share their faith.

The family traveled New England’s Route 1 corridor 3 1/2 times, according to Jennifer Guerrero. They would not complete a fourth. Joe Guerrero died when the bus slipped off its jacks as he was performing routine maintenance in anticipation of that next trip.

Joe Guerrero was originally from Garden City, Kan. According to a friend, Jeremy Richard, of Biddeford, he grew up in a rough neighborhood, but ultimately found his way to God.

His family described him as active and hands-on — he had been a talented baseball player and a Golden Gloves boxer when he was younger. “And he loved to fish. If he could, he’d fish all day, every day,” Marijane Guerrero said.

He was also an artist who etched glass, carved crosses, custom-built furniture, and hand-lettered the family’s bus.

“He could pull anything out of metal or wood,” Jennifer Guerrero said of her husband’s artistic ability.

And he was an evangelist who dedicated himself to preaching to anyone who would listen. According to Jennifer Guerrero, he asked everyone he met if he could pray for them. “He wanted everyone to know that God loved them,” she said. 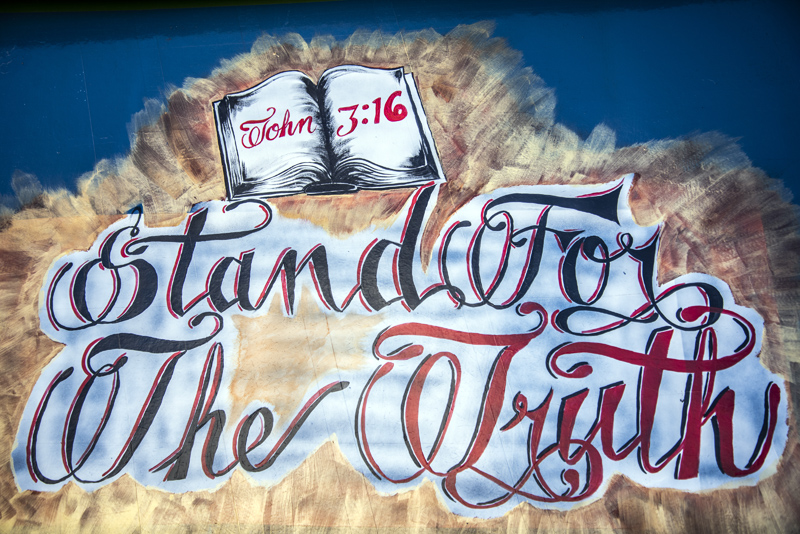 Joe Guerrero’s motto, “stand for the truth,” on the family’s bus in Waldoboro. Guerrero named his ministry based on these words. (Bisi Cameron Yee photo)

“Joe was a rare character,” Richard said. “He would dig into the intellectual side of theology, but that was not his focus. He wanted to meet people, he wanted to help them. You could just see God all over him. If it wasn’t what he said, it was what he did. Even if you only ran into him once, you would remember him. He was not all talk. He walked it and his family walked it with him.”

Jennifer Guerrero said that her husband “found the Lord at the age of 16, but didn’t have the support for it to flourish.” The couple met in Colorado, where Joe Guerrero earned a living as a tattoo artist.

In a video on the family’s YouTube channel, he spoke about that time. “We lived the fast life … we were so consumed by it. That lifestyle brought a lot of difficulties with it,” he said. 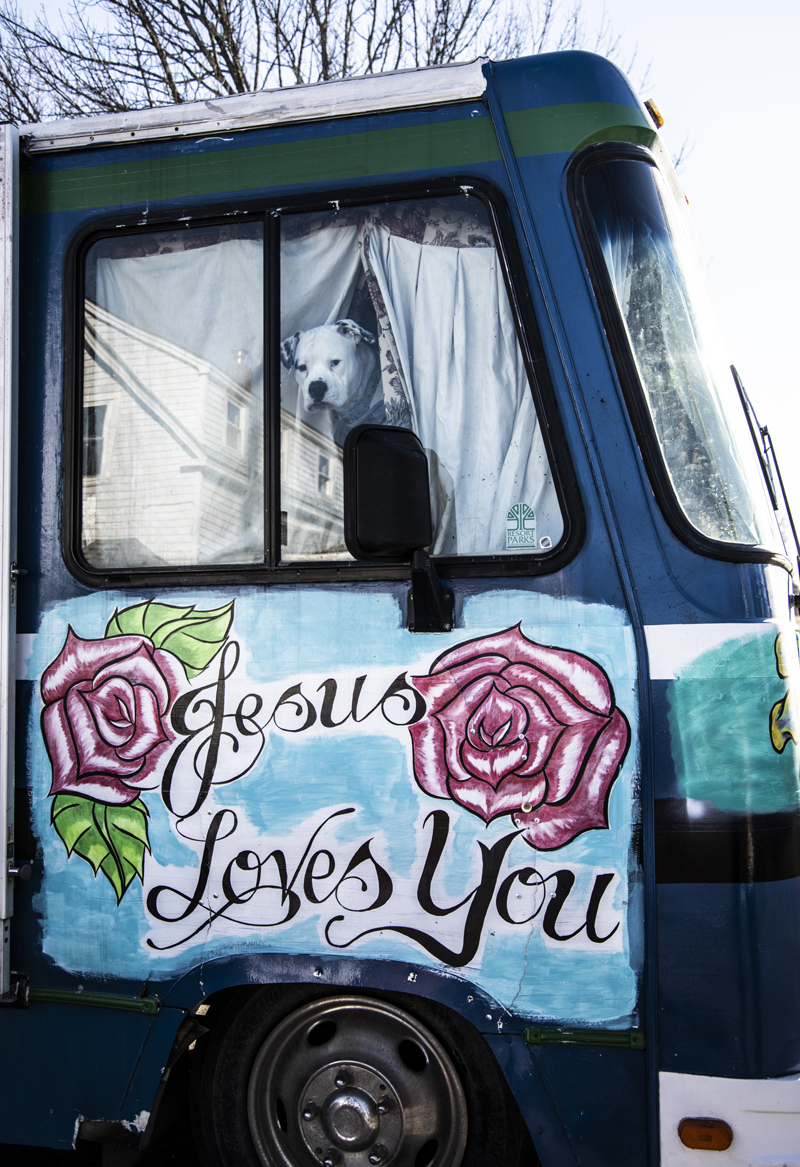 One of three dogs looks out the window of the Guererros’ traveling home in Waldoboro on Jan. 23. (Bisi Cameron Yee photo)

Jennifer Guerrero said that who her husband “used to be is not who he became. He dedicated his life to God.” The Guerrero family began to actively pursue their faith in Colorado until 2019, when Jennifer Guerrero had a dream that inspired the family to move to Maine.

They had no clear plan, no idea at the time that they would find a church to pastor, or start a ministry — they acted on faith. The family packed up their three dogs and their cat, sold everything they had, and moved 2,300 miles sight unseen. “All we had was $750 to our name,” Jennifer Guerrero said.

After they arrived in Maine, Joe Guerrero attended a semester at Faith Bible College before leaving to travel through Maine as a street preacher. The family wound up in Waterville, where the couple — Jennifer Guerrero is also a pastor — led the small congregation at the Second Baptist Church for a time.

But they returned to street preaching and founded Truth Ministries. They traded odd jobs to meet their needs and collected donations to support their ministry. They were caretaking for a property in Waldoboro when Joe Guerrero died.

Marijane Guerrero recalled the celebration of life, when friends and family and people the Guerreros had met on their travels all gathered to commemorate her father.

“Dad liked altar calls — the prayer to come to God during worship,” she said. She described the altar call at his service, the line of people filling the aisle to give their lives to God. “It’s exactly what Dad would have wanted to see. The lives he saved that day — it was amazing.”

Jennifer Guerrero said she is thankful for the outpouring of support the family received from the Waldoboro community.

“The town was beyond amazing. We never expected a community to pull together in the way they did,” she said. “They supported us in every way, bringing food and propane, donating money to complete the repairs on the bus, checking in, sharing words from God, praying — the list goes on and on and on. We can never thank them enough. It meant the world to us.”

The Guerreros are not leaving Maine. Jennifer Guerrero said they hope to buy a small piece of land as a home base for Truth Ministries. “Joe changed who I am, who the kids are. We plan to continue the ministry, to live out his legacy,” she said.

“We’re Guerreros. That means we don’t give up,” Marijane Guerrero said. “It’s about a bigger plan.”

Richard set up an online fundraiser to assist the family. To donate, go to gofund.me/7a06a833.