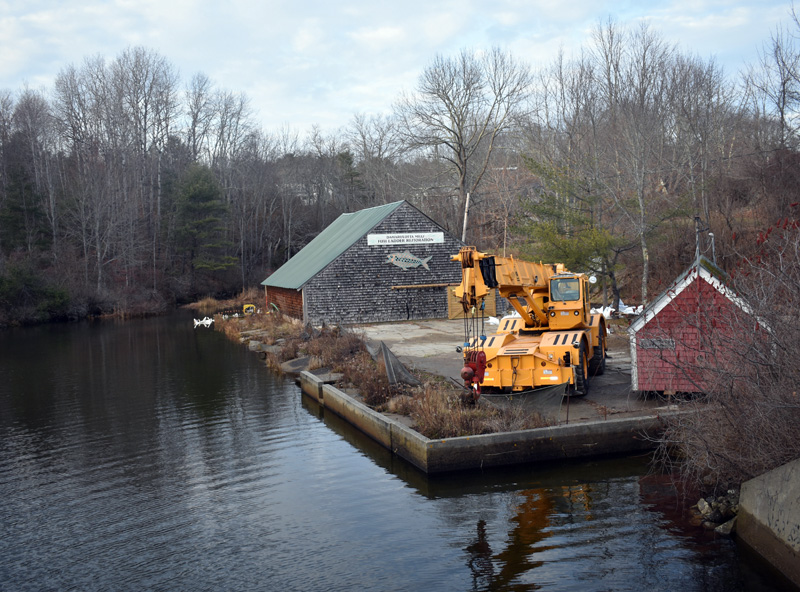 Construction equipment on-site at the Damariscotta Mills Fish Ladder in Nobleboro. Contractors are replacing a concrete walkway at the base of the ladder. (Alexander Violo photo)

The replacement of a concrete walkway at the base of the Damariscotta Mills Fish Ladder is underway.

The new walkway will ensure the safety of alewife harvesters, as well as the many visitors to the site.

“We want to make it safe for people to go down and view the alewives. The old walkway was falling in and really wasn’t safe. It needed to be replaced,” Nobleboro Selectman Richard Powell said.

Prock Marine Co., of Rockland, is doing the excavation and water control for the project, while McClintick Foundations Inc., of Nobleboro, is doing the cement work.

Work could not begin until mid-November per state regulations pertaining to alewives, while contractors could not interrupt the flow of water around the site until Sunday, Dec. 1.

“We were able to get permits to do some preliminary work – add some sandbags and do some excavation of the old cement,” Powell said.

The plan is to remove a failing concrete wall, which currently serves as a walkway, and replace it with new concrete, according to Mark Becker, fish agent and member of a five-member committee that oversees the operation and upkeep of the fish ladder.

Becker is managing the project. 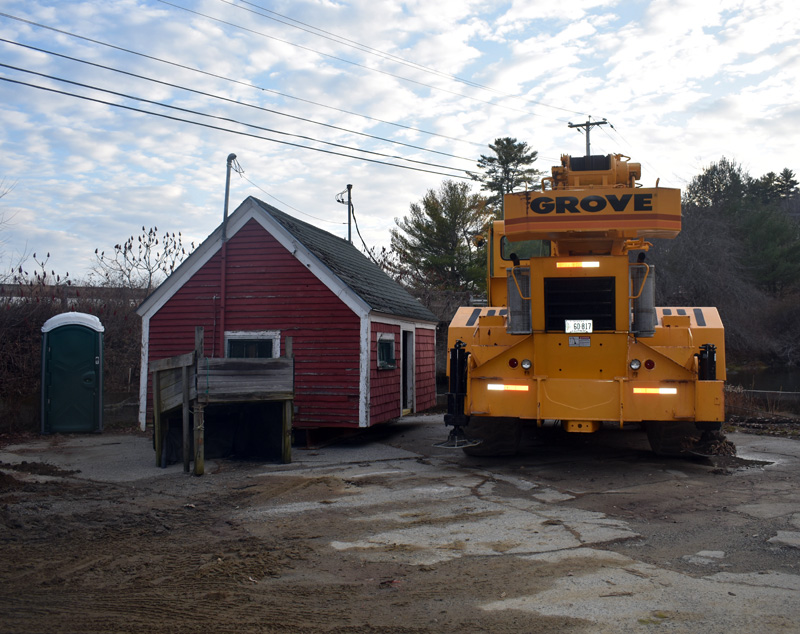 The “check house” at the Damariscotta Mills Fish Ladder will return to its original location after the replacement of a walkway at the base of the ladder. (Alexander Violo photo)

“A section of the walkway behind the fish house was leaning over, starting to collapse, and needed to be replaced for safety,” Becker said.

Nobleboro Board of Selectmen Chair Dick Spear said the work extends from the dippers used to harvest alewives to the fish house.

As part of the repairs, Becker said the check house, a small red building behind the fish house, needed to be temporarily moved.

“In order to get the equipment in there, we needed to remove it, but we will put it back exactly where it was, put it on a new foundation. The idea is to try and preserve it,” Becker said.

“We chose to save it because of its age and what is inside of it,” Powell said. “A lot of people who worked there carved their names on boards and there is a lot of information added over the years, so we chose to save the building as opposed to building a new one.”

Becker said the timeline of the walkway project depends on the weather.

“The goal is to have it done in the next few weeks. I think it is safe to say we will have it done this month,” he said. 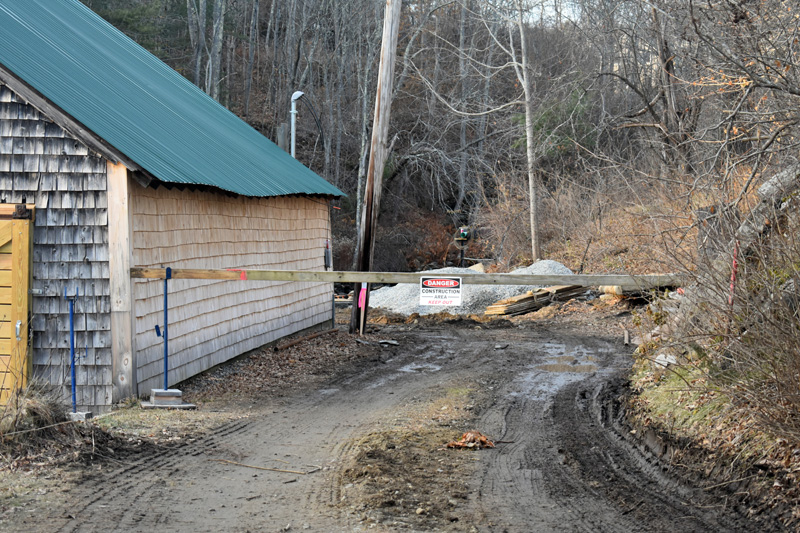 A board blocks entry to a construction area at the Damariscotta Mills Fish Ladder in Nobleboro. Contractors are replacing a concrete walkway. (Alexander Violo photo)

The work is estimated to cost about $100,000. At past selectmen’s meetings, Spear said Prock Marine estimated the cost of its work at $64,000, while McClintick estimated its share at $34,500.

Spear said $20,000 will come from Damariscotta and Newcastle’s joint fish committee, with the remaining costs covered by both towns’ reserve accounts for fish ladder repairs.

“The money comes from the sale of alewives. It has been built up over the years,” Spear said.

“The general consensus of the two towns is that the money earned from the fish harvest be reinvested into the facility,” he said. “We’ve been getting a good return on selling the harvest for lobster bait, and the profit we get after expenses will be put back into the fish ladder to make it safer and nicer.”

Becker said the project has been years in the making.

“We have been working toward getting this done for several years. We needed to make sure we had the funds, permits in place, and contractors lined up. There was definitely a sense we needed to get this done,” Becker said.

According to Powell, the fish ladder has made a comeback from a point where the two towns were not able to harvest alewives. He credited the annual festival and the people who made it possible for turning things around. The effort raised more than $1 million to rebuild the ladder.

“For 10-11 years we weren’t harvesting fish. We didn’t have enough fish and the ladder was in such bad condition they couldn’t get to the lake,” Powell said.

The fish ladder allows alewives to bypass a dam and enter the lake to spawn.