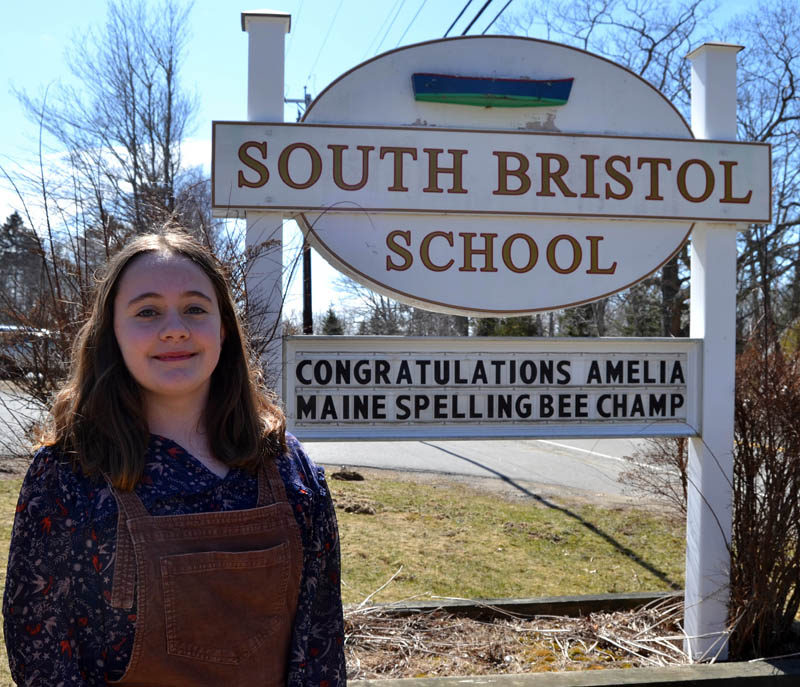 Amelia Rice stands in front of the South Bristol School sign, which celebrates her victory at the Maine State Spelling Bee. Rice, of Walpole, will compete in the Scripps National Spelling Bee in Washington, D.C. later this spring. (Maia Zewert photo)

Her cheering section, consisting of family, friends, and teachers, let out cheers, whoops, and even an “Attagirl!” as Rice finished correctly spelling the word “venue” to secure the victory. 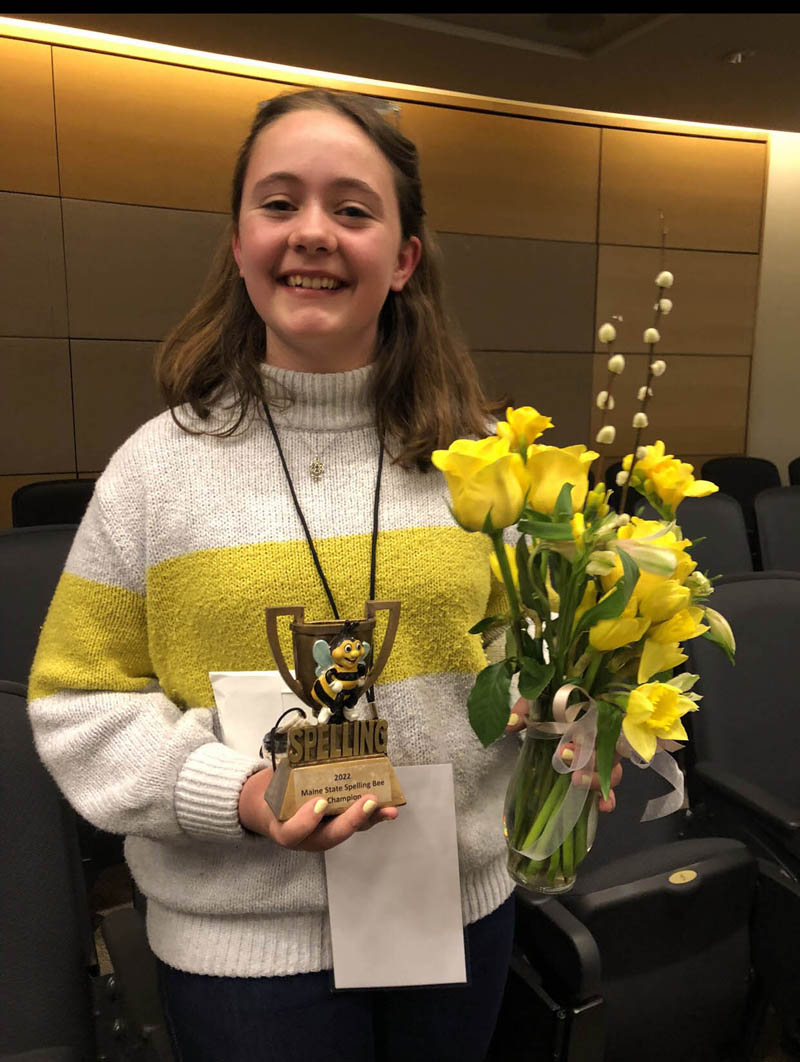 This is the third year of bees Rice participated in, having missed the school bee in fifth grade due to sickness. She misspelled a word fairly early in the SBS bee in sixth grade, but rebounded the following year when she won the seventh and eighth grade school spelling bee. Rice then went on to become the Lincoln County champion after earning the highest score on an online test.

During the Maine State Spelling Bee last year, which was conducted over Zoom due to the COVID-19 pandemic, Rice tied for fifth place after misspelling the word “nigh.”

Rice’s road to the state bee took a very similar path this year. She and SBS sixth grader Yzze Bhe tied at the school bee to become co-champions before Rice repeated as Lincoln County’s champion.

“We actually found out on March 2, the same day as last year,” Rice said.

In the weeks between the county and state bees, Rice focused her studying on root words.

On March 26, Rice and the 11 other competitors took the stage in Hannaford Hall on the University of Southern Maine campus in Portland. Save for the three competitions at South Bristol School, this was the first in-person bee Rice had participated in.

The nerves weren’t necessarily visible in the audience.

“She was so well composed on the stage waiting for her turn … with perfect posture,” Kayla Wright said. Wright teaches English and language arts at South Bristol School, and has been Rice’s teacher for the past four years.

Wright, along with Elizabeth Lombardo, Rice’s English and language arts teacher in third and fourth grade, and SBS math teacher Holly Blanc, watched with Rice’s family as she correctly spelled word after word in 10 rounds of competition. Every time Rice was asked to spell a word, Wright found herself holding her breath until the word was completed.

“It’s funny, because … there were a lot of personal connections with the words she was spelling,” Wright said. “There was one that I knew she knew from a book she had read for me or used in an essay and another word connected to the Youth Action Club.” 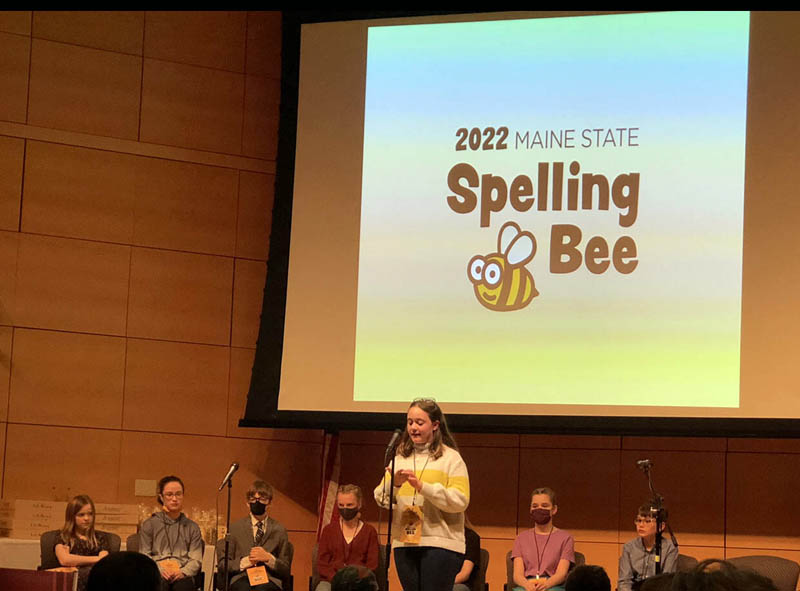 Then one round knocked out all but Rice and one other student.

“I was honestly shocked when it happened, and just thought, ‘holy moly,’” Rice said.

After her competitor misspelled a word, Rice stepped up to the microphone, unsure of what word she would get. When the announcer asked her to spell “venue,” Rice asked for the definition of the word for some extra time.

“Those of us who knew her well knew she knew the word,” Wright said. “We had to sit silently, but we were all busting.”

Rice drew the letters of the word on her hand as she spelled, wanting to be as careful as possible. The moment her correct spelling was confirmed, Rice burst into a big smile.

Rice credited her success to her love of reading, writing, grammar, and Wright, who she described as “an excellent teacher for an excellent subject.”

“She’s put everything into it, and she’s been so passionate,” Wright said, “My eyes were welling up with tears … I’m so proud and excited for her.”

Rice will represent the state at the Scripps National Spelling Bee during the week of Memorial Day. The bee will have multiple competition rounds, including a qualifying test, and the semifinals and finals will be hosted by actor and literacy advocate LeVar Burton.

The full schedule will be posted at spellingbee.com as the bee gets closer.

The trip will be Rice’s second to D.C. this year, as the SBS eighth graders are scheduled to take a class trip there later this spring.

To prepare for the national spelling bee, Rice said she will focus on studying Latin and Greek root words, something she touched on in preparation for the state bee.

“It’s something I always dreamed of and it felt so unattainable until now,” Rice said. “Now it’s possible.”